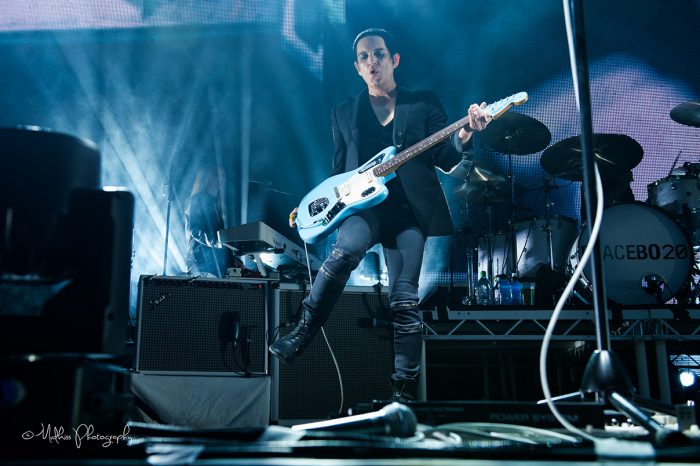 Placebo headline a series of Arena shows around the UK culminating at the SSE Wembley on December 15th. Louder Than War’s Nigel Carr reports back on the Manchester show below with photos by Melanie Smith.

It’s more than 20 years since their first album was released so what better time than to tour their greatest hits and as Brian Molko says at the start of For What It’s Worth, “Let’s not forget that this is our birthday party!”, Let the show begin.

It’s a freezing night in Manchester as the band reach their mid tour stride with frankly a rather less than sold out show at the city’s Arena. With support from Art Rock supergroup Minor Victories marking a 7.30pm start, early by anyone’s standards, Placebo take to the stage at 8:30.

There’s something special about this band, maybe it’s Brian’s incredible voice, the high consistency of their output or just because they are just so fucking good live. Whatever, they have always managed to deliver intense, relevant, pure alternative rock like no one else and have always felt current. It’s eighteen months since their storming show at Ardwick’s Apollo, just a couple of miles down the road but for some reason it feels light years away from this cavernous venue. 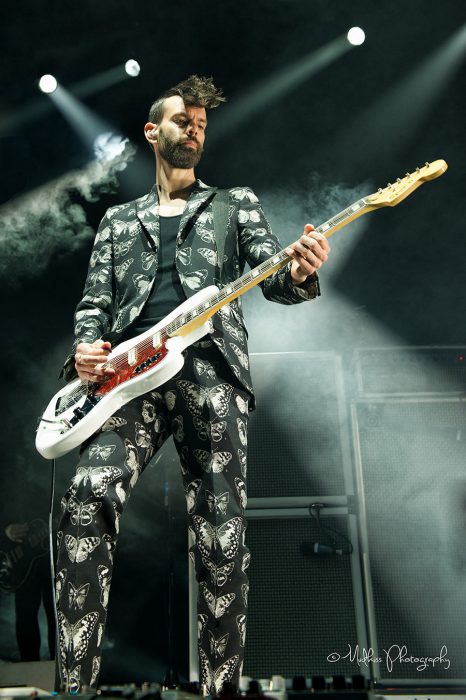 Guitarist Stefan Olsdal takes the stage first and has somehow managed to suspend a huge fop of hair from the front of his brow. Dressed in black and white printed suit he looks amazing standing defiantly, facing the audience, hammering out a repeated and thunderous note on his guitar. He’s joined by the newly installed Matt Lunn who provides deafening beats, before Brian joins them onstage as they slowly break into Pure Morning. It’s loud and spine tingingly familiar. The wall of sound that this band can create is breathtaking, it’s like being hit by a giant tsunami.

Track after track wash over us as the gig proceeds, with every one a gem, played flawlessly and punctuated by the supporting cast which features Fiona Bryce on violin. A few odd omissions like Meds and Drag, which once again they miss out playing live, but more than made up by the power and intensity of the best of their back catalogue.

The first half of the show peaks with Without You I’m Nothing which of course has been re-added to the set after the death of David Bowie earlier this year. His backings are omitted tonight but there is a beautiful video back-drop of him hanging out with the band, recording and playing live. Of all the tracks I’ve listened to during 2016, I don’t think anything has a greater emotional effect on me than re-listening to the Bowie version of this track when I had to review the album for the LTW magazine. It’s almost too much hearing it live with him so evident in the performance. At the end of the track Brian and Stefan turn to the backdrop and ever so slightly bow, as if to reinforce the line – Without You, I’m Nothing. A deeply touching display of affection. 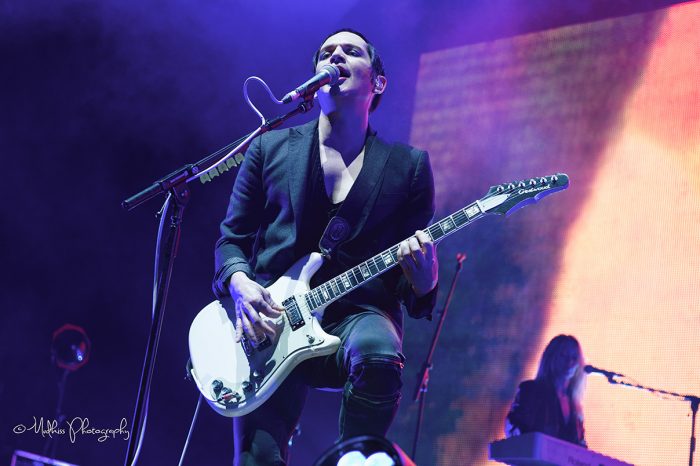 Brian engages with the audience constantly throughout the show and I think he is as aware as anyone else is how the size of this venue is affecting the way people engage with the band. Particularly during the slower numbers like Lady Of The Flowers off the first album, which he describes as how “that was pretty intense for me.”

Before Special K he has a good word with the auditorium. “I know it’s a Monday night but you’re still allowed to have a good time, it’s a motherfucking party!” He gets everyone in the crowd to stand with a rallying call to arms for Special K, or “Dance Motherfuckers” as he calls it! They rip through this and Song To Say Goodbye before closing the show with The Bitter End and the audience, now refreshed, are back onside.

Stefan holds his rainbow guitar aloft making a statement before the start of Nancy Boy, once again, thankfully re-included into the set and they close with Infra-Red. Off again before closing the whole show with a final encore of the stunning Running Up That Hill, which leaves the crowd properly sated.

They remain thousands of miles above any of their contemporaries, and even a show with a few too many melancholy numbers was enough to thaw the cockles of this frozen Northerner. Stunning and original, forever Molko. Go and see them if you get the chance!

The tour continues in the UK before they head off to France on the 18th December: