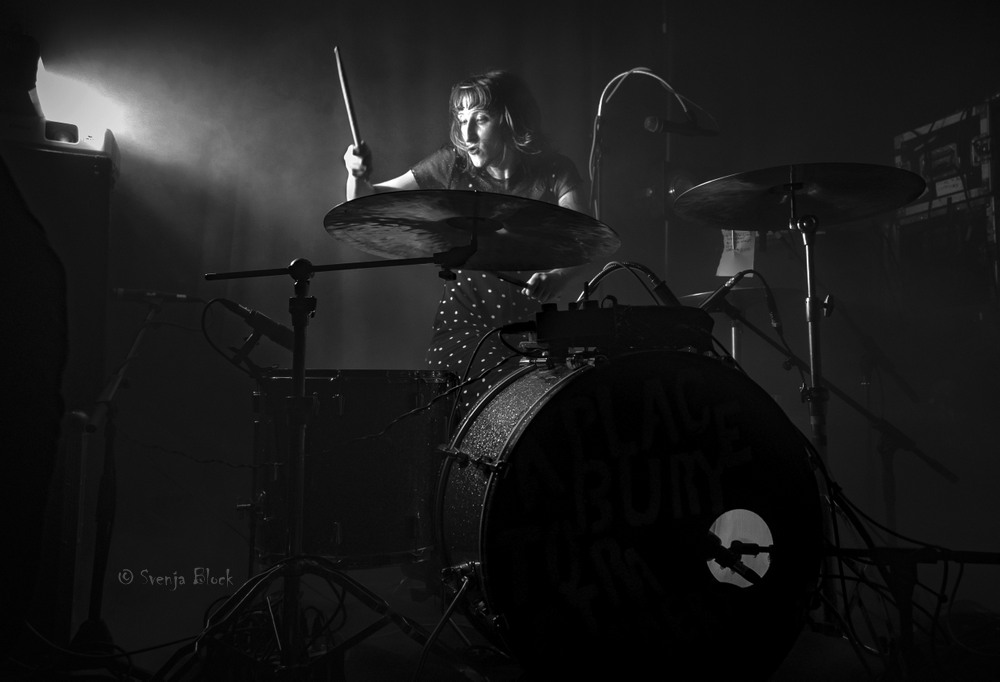 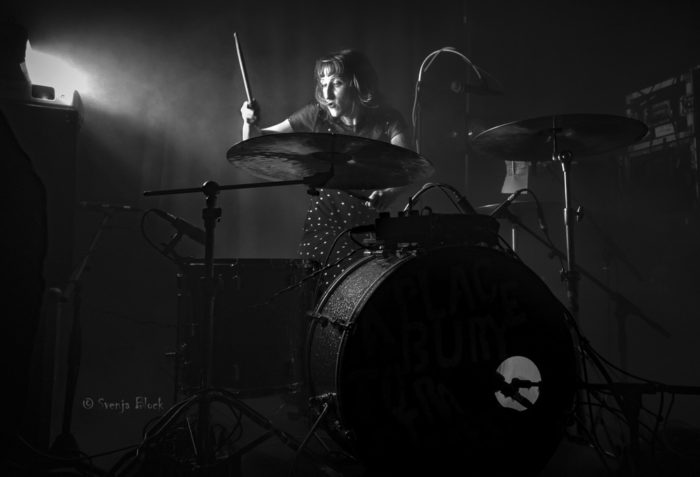 A Place To Bury Strangers

A Place To Bury Strangers’ London gig provided swift and decidedly noisy pendulum swings between sensory overload and deprivation. A good thing that Louder Than War’s Andy Duke was on hand to take in the darkness and the feedback-laden light alongside photographer Svenja Block.

Remember the first time you heard the almighty squeal and crunch of a guitarist inserting a lead into their instrument with the amp on? That sensation of being confronted with a sound that’s equal parts percussive and unnerving leaves an indelible impression. As did A Place To Bury Strangers’ final stop on their European tour in the capital.

Hoxton Square Bar & Grill is filled to capacity. The vibe of the venue is akin to being on public transport during the oxygen-sucking peak of rush hour. And, with my head located in a less than comfortable proximity to the armpit of a random fellow fan, Brooklyn-based threesome A Place To Bury Strangers make their way to the stage. This is a power trio with a difference. Although they’ve have received many a comparison to a certain iconic Mancunian post-punk band, not to mention a gang of goth trailblazers from Northampton, there’s much more to their sound than these two components. In the same way that some people are awestruck to discover that they’re 8% Mesopotamian when receiving DNA results from the likes of 23andMe, I can hear more disparate elements to group’s sound. But more about that later.

Kicking their set off with You Are The One, from 2012’s Worship album, the distinctive fuzz-infused bass drone from the New Zealand-born Dion Lunadon is driven with great force by the ‘Stephen Morris-Meets-Budgie’ delivery from Lia Braswell on drums. Adding to this formidable rhythm section is Oliver Ackermann’s other worldly wall of noise on guitar. Whereas the recorded version of this opening number is haunting, tonight’s live interpretation is a very different animal. The dynamics are awash with an unhinged and thunderous aggression that sets the scene for the band’s 12-song set with Ackermann’s vocals providing a cavernous and hypnotic upper layer to the ‘everything louder than everything else’ delivery from the band. And, yes, that was a Motörhead reference. Which is the unlikely element that this reviewer hears deep within the trio’s sonic DNA. Lunadon’s angry Fender Jazz Bass sound fills a similar sonic space to Lemmy’s Rickenbacker attack. In addition, this is a band who live happily in the red on every VU Meter they’re piped through – something that the late Ian Kilmister and his gang were equally fond of. To say this plucky lot are loud is an understatement. With the arrival of Punch Back, from this year’s Pinned album, Braswell’s drums take on a quasi-Phil Taylor feel circa Overkill which she effortlessly delivers in tandem with lead vocals.

In addition to being a founding member of the band, Ackermann is also the brains behind Death By Audio – a specialist guitar effects company based in Williamsburg. The legacy of that impressive pedigree is evident throughout the set. Brandishing a Fender Jaguar, an instrument much loved by the likes of Sonic Youth and Johnny Marr, the palette of sounds at his disposal is seemingly endless and richly varied. And his style rapidly hops between melodic to mood altering noise and back again throughout the set.

Providing a melodic respite from the dirge, the vocal interplay between Braswell and Ackermann on We’ve Come So Far is as impressive as it is welcome. Especially with senses being heightened thanks to the dimly lit stage and ever increasing quantities of dry ice being wafted across the stage. Through the mist and the strobes, the intensity of Lunadon’s stage presence becomes a silhouetted display of mania. He jumps menacingly across the stage and isn’t afraid to hurl his bass into the air when the mood strikes him. And the mood strikes him often. 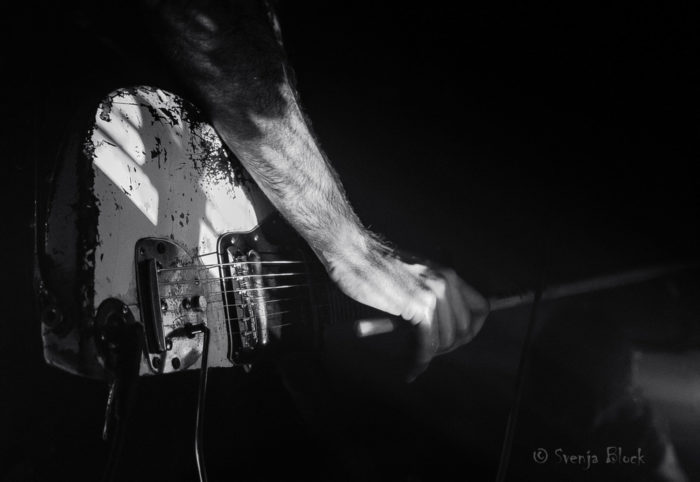 We’ve Come So Far, from 2015’s Transfixiation album, showcases the band at their melodic best with the double vocal assault of Ackermann and Braswell recalling The xx had they listened to Jesus & Mary Chain exclusively while on tour. The track climaxes with a dramatic ascending guitar motif and freeform drums that bring to mind Billy Cobham’s work with Mahavishnu Orchestra with a lashing of Keith Moon thrown in. One would be forgiven for assuming that the group deliberately increased the noise factor at the end of this tune to balance out its strong melodic sensibility. There are parallels with There’s Only One Of Us, from this year’s Pinned album, which follows. Although the recorded version is restrained instrumentally with an up front vocal mix, the band well and truly take it to 11 live with every instrument sounding like a roar. Yet it still remains a catchy prospect no matter how much chaos gets thrown into the mix. The pace increases with the BRMC-esque Drill It Up. Featuring Lunadon on lead vocals, this marks the fastest pace offering of the gig thus far and illustrates the Kiwi’s gift for creating bass lines that are equal parts gritty and groovy. With the Blue Monday-esque Situations Change, from their latest album, the audience’s stance alters from being spellbound to being dance floor-bound. Or, to dance as much as one can when you’re squeezed in place by a venue filled with A Place To Bury Strangers fans. This foot tapper of a number is unable to have its catchiness compromised no matter how many banks of motion sickness-inducing effects pedals you throw at it. The tuneful content is characteristically neutralised by what follows. A drone-heavy bass solo is followed by a ‘back of the venue’ performance of the electro-charged To Fix The Gash In Your Head that incorporates a portastudio in its foundation. Although the likes of U2 have done gigs in the round off a remote stage at the back of stadiums and arenas for years, it’s a rare thing to witness it happening at a venue of this size. Being of average height, I couldn’t witness the intricate details of who was doing what during this song. But I witnessed an open flightcase, with an ancient cassette-based portastudio inside it, being rolled through the crowd and then manipulated to great effect by Ackermann. A perfect example of a studio being used as a musical instrument.

Returning to the stage with Straight, which features a drum and bass pattern that Death From Above 1979 would envy, I was struck by how effectively the recorded material has been transformed onstage by A Place To Bury Strangers. Vocals get distorted, dynamics are enhanced and the outro erupts into a celebration of noise. A similar live rebirth is experienced with In Your Heart from 2009’s Exploding Head. Featuring a mechanical sounding drum machine on the recorded version, the track gets taken to a very different place with Braswell’s bombastic beats at the helm. Had Ian Curtis not opted for an early departure from this mortal coil, I envisage that Joy Division’s sound might have progressed into a similar stylistic territory. It’s darkly seductive and gets under your skin increasingly with each passing bar.  And then, in a Monty Python worthy ‘and now for something completely different’ moment, a very surprising change of pace occurs. Brandishing an autoharp against her chest, Lia Braswell performs the sultry Harp Song on her own. It’s a lush offering with a vocal sweetness that’s offset by delicious dissonance and unnerving effects. It soon transpires that this folky number is the penultimate calm before the storm.

Finishing their set with I Lived My Life To Stand In The Shadow Of Your Heart, from the Exploding Head album, things get dark. Very dark. The outro arrives with the power and volume of a Lancaster Bomber that’s on a mission to destroy. All the stage and venue lights are turned off and we’re all engulfed in total darkness and thick smoke from the dry ice. At random intervals, drum fills are partnered with bright flashing strobe lights with the bass making the sub-woofers of the PA beg for mercy. It’s an uneasy feeling. With the cacophony growing and becoming more intense, I feel transported to a scene of trench warfare but with the sound slowed down and amplified. My shirt is shaking and the follicles on the back of my neck are rising to attention. The hybrid of sensory deprivation and sonic overload lasts for some ten minutes and creates a dystopian aural onslaught  that would be the perfect soundtrack to the most disturbing moments of Ken Russell’s Altered States. It’s difficult to take in. Yet I can think of no other time that a gig has produced such a strong reaction in me – challenging or otherwise.

While my ringing ears were a testament to the power and volume of this trio, I only wish that more melodic content could penetrate the beautifully dense sonic might of A Place To Bury Strangers. 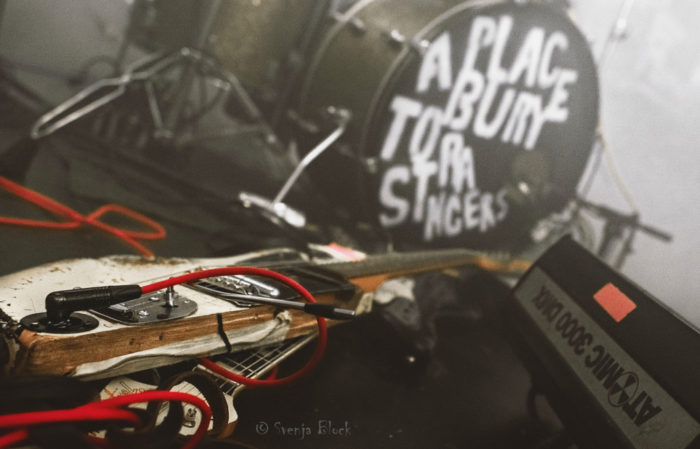