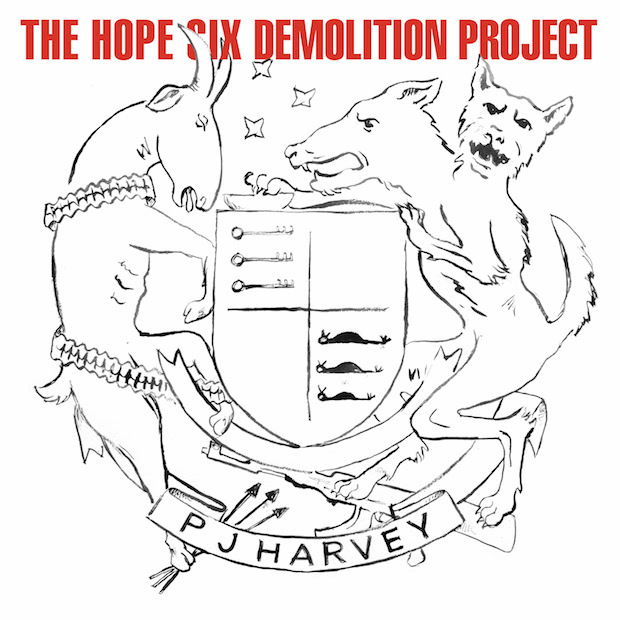 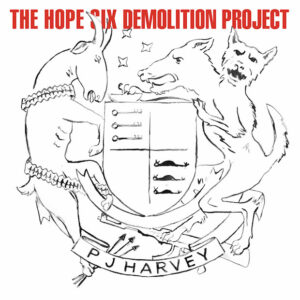 Whenever a new Polly Jean Harvey album is announced it is always exciting not just because of her formidable and rich back catalogue but also because we get to wonder what persona she will present to us this time as throughout her career Harvey has always presented her albums as a complete package whether that be the pale-faced voodoo blues priestess of To Bring You My Love or the slick, and sharp suited woman presented with the love and lust opus Stories From The City, Stories From The Sea.

On Harvey’s last album (2011’s Let England Shake) we were presented with an almost minstrel-like figure brought to the now from the time of Cromwell, regaling us beautiful yet brutal stories  that were often flecked with the blood of whose remains now make up the earth we walk on. Let England Shake was full of beguiling and twisted wordplay that was as evocative as it was (often) upsetting.

All of this is vital to remember as what we get on The Hope Six Demolition Project may just be Harvey’s most lyrically direct and straight-forward release to date as this time the whole album plays like a report from the front-line by a war correspondent. An often bleak listen where instead of past sins being delivered in an almost romantic way we get the hard facts delivered matter of factly making for a sometimes uncomfortable but enthralling listen.

Inspired by Harvey’s tours around the USA, Kosovo, and Afghanistan, The Hope Six Demolition Project never shies away from revealing the brutality of life in certain parts of these countries with The Orange Monkey explicitly telling us that she “took a plane to a foreign land and said, I’ll write down what I find”

Throughout the album we get “displaced families eating a cold horse’s hoof” “graffiti sprayed in Arabic, and balanced sticks in human shit” and a “highway to death and destruction”. This last line is taken from the album opener and recent single The Community of Hope which caused quite a stir amongst some of the current and past dignitaries in the  Ward 7 area of Washington D.C. with the ex-mayor stating that “I will not dignify this inane composition with a response” and the current mayor Yvette Alexander, who tweeted “I respect all forms of artistic expression but this song does not reflect Ward 7”.

The one thing those who have responded negatively are missing is that this is not just a Brit trawling through their city looking for dirt but instead a narrator who is relaying words stated to her by residents of the Ward.  There is even the line “at least that’s what I’m told” which should make quite plain where the artists inspiration has come from.

The bleakness of Harvey’s lyrics continues throughout and it is hard to remember a song as bleak as The Wheel that has got radio play with its lines about the deaths of children so concise and direct it makes for tough listening.

Musically we have also shifted from the catchy and sometimes whimsical nature of Let England Shake and instead treated to a raw, dense, and disorienting listen that makes this a true headphones experience. This is an album that only reveals its true nature when you are secluded and locked into it with no outside distractions as yes you may enjoy playing it out on a system but you will be missing so many intricate details that may that the effect will be somewhat diluted.

The Ministry of Defence is but one of many examples where what can seem like one thing becomes something else entirely once you have let it seep deep into the soul. What starts with just a slash-and-burn Swans-like riff slowly builds as each passing second an element is added making it almost unbearable in places (which is a good thing). We get bass clarinet, saxophone (what with Blackstar it looks like the sax is back for our alternative icons)keyboards, and percussion played  with restraint and pin-point accuracy by Polly’s band (the usual suspects of Mick Harvey and John Parish are here but this time they are augmented by Mike Smith, Kenrick Rowe, Alessandro Stefana, Enrico Gabrielli, and Alain Johannes). Considering all the instrumentation on the song you would assume it could sound cluttered but the opposite is true as each one just adds that extra twist anchoring the song and letting it build brick by brick.

The Ministry of Defence also sees Harvey use the narrative tool she used on This Mess We’re In from SFTCSFTS but instead of Thom Yorke’s floating falsetto we are now treated to Linton Kwesi Johnson who delivers lines in a spoken word fashion as Harvey repeats them slightly behind making for an interesting dialogue between two people who are saying the same words but a full of alternate meanings.  There is a truly magical moment where producers Flood and John Parish let the music dip out and we are left with Johnson speaking in one ear, Harvey in the other whilst the music and breath-as-percussion sit in the middle somehow creating the effect of three separate elements playing apart from each other before they come crashing back in making the song whole again.

The boldest move on the album is contained within The Ministry of Social Justice which starts with a playing of the Jerry McCain blues rocker “That’s What They Want” before Harvey and the band come in delivering a rolling and cutting attack on capitalist greed. Something Harvey’s good friend, the late Don Van Vliet would no doubt have approved of.

The Hope Six Demolition Project is Harvey’s most complex and transparent album in years. This is in no doubt down to its conception early in 2015 at Somerset House where she (with Flood and Parish) allowed fans to look into the writing process. It (the album) will be many things to many people as what you find within will be completely dependent on how you to choose to engage and listen.

Less melodic than her previous works, this album is one that is certain to create debate amongst fans and critics alike. Divisive, enthralling, avant-garde, multi-textured and thrilling, Harvey has once again proven that when it comes to her releases we must expect the unexpected and just trust her and her bandmates to create an album that is more than just a listening experience, more than just background noise.

This is not disposable, this is art served with a dagger of honesty and a beacon for others to travel towards.

All words by Simon Tucker. You can find more from Simon in his author archive.