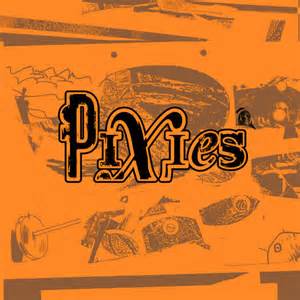 A new Pixies’ album is an event – even if we’ve heard the tunes before. Nick Fisk reviews.

This is a bit of an oddity. It’s the Pixies’ first new album for 23 years, but all the songs have already been heard on the three EPs put out in the lead up to this album release. The reception of the EPs could be described as a little luke warm, with one major criticism being that the sparse sound of the band’s first two releases, Come on Pilgrim and Surfer Rosa has been abandoned for a much more filled out style of production. These critics seem to be unaware that prior to the band’s break-up in 1993, they had already released two albums with a fuller sound, in the form of Bossanova and Trompe Le Monde, so it’s really not so surprising that they’ve continued more in this vein, rather than reverting back to a style they were adopting all the way back in the late 80s.

It’s more surprising that it’s taken the band 10 years since reforming in 2004 to release a new album. I guess with 6 other albums, they were quite happy just touring these for a while: writers’ block could hardly have been the problem – Frank Black released around ten albums in the time the band was split up, and in fact, has continued putting solo records out now that the Pixies have reformed (a further ten – that’s twenty in total, kids!). Although Frank Black’s sound is really not too different to the Pixies, perhaps there was greater pressure to get things right when it came to deciding on songs that would suit a Pixies release rather than more solo output.

I have to be honest, when I first heard Bagboy, when it was released as a one off track before the EPs last year, I was a little disappointed myself, but as Mike Read of Radio 1 would always say, it’s definitely a “grower”, and I’ve warmed to it sufficiently that I’d now say it’s already one of my favourite Pixies songs of all time. And in fact, it’s the production that leads me to say this. I think it’s the bolstering chord progression at the chorus. When I heard Bagboy live for the first time, this reinforced my view that in fact, here is a Pixies classic. The lyrics –

“I had a bad reaction to your public hobby writings.
I get no satisfaction from your very recent sightings”

appear to mock bloggers or users of social media, though the Pixies themselves are not averse to a bit of Facebook marketing.

Indie Cindy begins with What Goes Boom, which in fact is the fourth track from EP1. In compiling this album, they have put some thought into the track sequence as opposed to simply placing the four tracks from each EP in the order as they were originally released. This is one of the heaviest tracks on the album, with sexy sounding lyrics, suitably booming bass, and again, is a great live track, and a good opener.

Things immediately turn softer for track two, Greens And Blues, which sounds like a real indie anthem. Beautiful arrangement, and simple lyrics, with a natural feel. The second verse reads,

“I said I’m human, but you know I lie.
I’m only visiting this shore.
I’ll soon be leaving in the outbound tide,
I pray again we will meet.”

Nice, simple, classic Pixies in many ways, given that so often the Pixies deal with man’s relationship with the natural world.

The album’s title track again has some classic elements, with surf style guitars. Don’t know if it’s about time there was a new term for the surf guitar sound – it’s about as appropriate a use of the word as the word seagull is for the birds that flock around Cardiff’s streets of chip wrappers at 4am. When Teenage Fan Club penned The Concept, perhaps in a pub in Glasgow, they were probably about as far away from “going surfing” as, well, at least two of The Beach Boys themselves were! But I digress. The track has got the feel of a classic Western film soundtrack, or something like Kill Bill. The Pixies are of course no strangers to having their music (most notably Where is My Mind) used in soundtracks. Apparently, this song is the one where the Pixies are asking (hoping) that fans accept them. I think he could be pretty confident of fans’ acceptance. A boastful Frank Black, as if in a rap battle, says to a rival, presumably Indie Cindy’s rival in this case, “You put the cock in cocktail” before continuing, “I’m in Love with your daughter… I’m the one who’s got some trotters, you’ve many mouths to feed.”

After Bagboy, there follows a couple of almost fillers. Without doubt, this is not an “all killers” album, but I don’t know, perhaps these songs are more like brief reprieves from the killers themselves. Magdalena 318 is pleasant enough, without ever really taking off. Silver Snail is a bit of a slow plod, but it’s still not skippable-bad. The Pixies of course are known for kind of inventing “loud quiet loud” songs. This album is a bit loud-quiet-loud itself, veering from quiet to loud, killer to not quite so great. Like a Pixies live set, it can be sometimes nice to have a little rest though. You may have just spent the whole of Wave of Mutilation jumping around like a banshee, so it’s nice to take a rest while a quieter song is played, in anticipation of vlarching out again once more when the next killer kicks in.

Because then in comes Blue Eyed Hexe which is one of the Pixies’ heaviest ever songs – I mean this one actually does cross over into heavy metal territory, with a stomping beat akin to many a 70s glam act. When Francis screams, is it Brian Johnson or Noddy Holder? There’s a slight comic element to this track, but it’s definitely still one of the strongest on the record.

It’s filler time a little bit again next, with Ring The Bell before Another Toe In The Ocean. This second sounds very Pixiesesque, with perhaps a Trompe Le Monde type of sound. The title itself is reminiscent of the Wave of Mutilation lyric, Drive My Car Into the Ocean. The reference to Edward Thatch (aka Blackbeard, the 17th century pirate) is characteristic of the way Francis has always tried to source material for lyrics from so many different places. Pixies albums reviewed in the NME were always great, with long explanations of how Francis sourced the lyrics. This album does not have a theme running throughout, like Doolittle did, for example, but there are enough typically astute pieces of writing; perhaps a connection with fans and the live experience is one theme.

I think this is a band who has a good understanding of its fans and what they want. Many bands these days look a bit desperate for sales when releasing their limited special vinyl editions (in today’s world, where most of the time, you can find easy ways of getting music for free) but I think in the case of the Pixies, they have a certain fanbase who are actually going to like and appreciate these types of products.

The title of this album, Indie Cindy is significant. This is a band who really has now become pretty big, but are still a million miles away from the mainstream. Have you heard a title of a release that sets out a band’s case for being an indie band like this since The Pooh Sticks’ Indiepop Ain’t Noise Polution in 1988? Of course, there’s a difference in style between indie and indiepop, but in these days of boring old “competent” guitar bands, it’s nice for a big name act to have a go at bringing indie back.

Indie is hardly a soft style of music. A test of any album is the car test. Hip Hop or Drum and Bass might be de rigueur if you want to get noticed while you’re driving, but stick this album on at full blast, with the windows wound up, and you’ll see a few cool Indie Cindys turning their heads.

After Another Toe comes Andro Queen, and I have to say, again, this already now features in any list of favourite Pixies tracks for me. The production undoubtedly helps, with some really nice use of delay. Just a beautiful song this one – I really like the Esperanto section at the end. There is a faint military style beat at some points, which kind of gives the track more importance, and it’s as if they’re drumming up support for this song. This album was produced at Rockfield Studios in Wales (another thing to celebrate for us Welshies!) by Gil Norton, and I think it’s worth bearing in mind that he has produced every Pixies record since and including Doolittle. The more sparse Surfer Rosa was of course produced by Steve Albini, and I really think that unless they return to using either Steve Albini himself, or someone like him (not that there can be many!), the Pixies will not go back to that sound again.

Closing numbers Snakes and Jaime Bravo are a little on the disappointing side again, though the final track if anything is the most indie sounding track on the album, with a Super Furry Animals feel to it. It does serve as a good closer as the band sing Goodnight towards the end. Could this be their final farewell in terms of album releases? Or is this just a goodnight, like at the end of a gig, and see you next time?

Overall, I have to say, I feel this is a very solid release, despite just a couple of weaker tracks. The stand out tracks rank easily among the very best Pixies songs, and it’s these that leads me to say that this is the best Pixies album since Doolittle. It’s a Pixies record that real Pixies fans will cherish. Indie Cindy herself will love it.