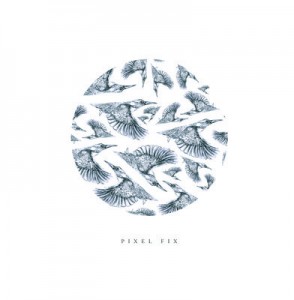 In Spring 2013 Pixel Fix delivered a handful of debut tracks each delivering shimmering delights of immaculately atmospherically flirtatious melding of slowly, twisting yet momentous guitars and gliding luminous electronic melodies. Here we are 2014 emerging from winter to a new four track EP from the Oxfordshire four piece, of whom we are still now more enlightened they remain enigmatic and in some ways this opens a path direct to the heart of the music – there being little distraction on the peripherals.

The Fall EP’s title track; Fall starts off like your sinking into a giant heated marshmallow the harmony envelopes – undulating and encompassing its subtle viscosity is warming, secure … delicious. The textural feel to the track is compounded by the vocals that feel attentive and the repetitive peppiness of the chorus make it both instantly accessible and likeable.

Two instrumental interludes separate the two longer tracks on the EP: She Hears You and You Want are ambient driven palate cleanser – deft in their ability to weave moody soundscapes, in such brief snatches, their effectively at massage a mood in to your mind and while a wonderful teasing addition to an album: however on a four track EP they feel like little mischievous deceptions, who have hidden the other half of themselves from us.

Awake is a heavier with a more modulated increase in build that offers a song with a more intensified vibe than the pop sensibilities of the opening drag. The underwater sounding opening vocalisation along with the sounds of flooded dripping there’s a sensation of immersion of floating and flowing gives the track gives a feeling of vicarious moon lit night swimming.

Fall EP is another brilliantly realised release no less youthful than their first however it displays a more mature sensuality alongside a new complementary dream pop feel. Yet again however it is over way before you want or need it to be – I’ll joyously take this EP and play it often – but really these guys need to be making double albums.

The Fall EP is available now for download from iTunes now ~ plus everyone can enjoy a free download of a remixed version of the title track by by the band Walton Hoax either from Soundcloud here or below.

The band are on tour this spring headlining on March 1st at the Castle Hotel, Manchester they them continue around the UK and Ireland supporting Young Kato (dates below) which culminates in an appearance at the Wychwood Festival on May 31st.

For more information and tickets and releases as well as keep up with what is going on in the world of Pixel Fix via the bands Facebook and Twitter. Pixel Fix’s Youtube account is here.