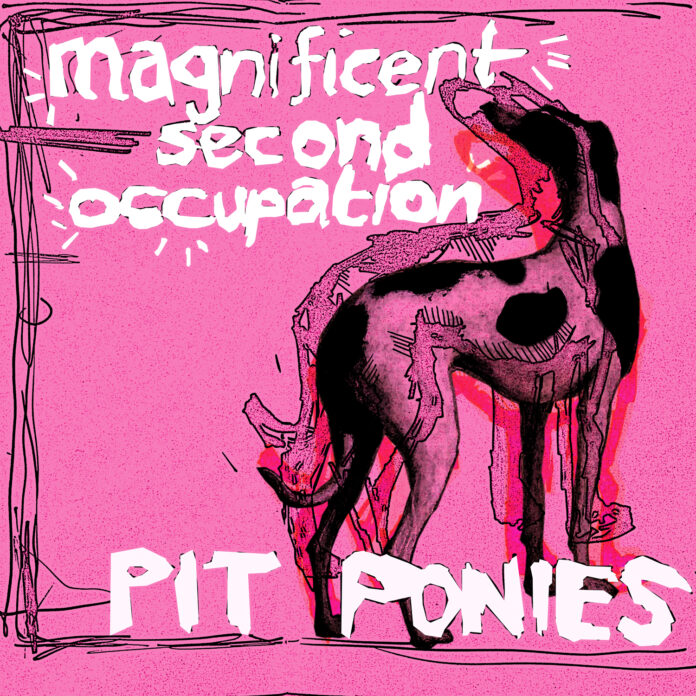 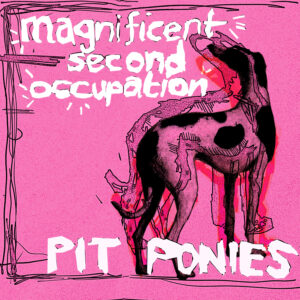 Pit Ponies recently ran an exclusive on Louder Than War for their track Welcome To The Unhappy Bit. Check it out here. Now, Roxy Gillespie reviews their album for us.

After hearing the two Pit Ponies’ tracks featured on the Trashmouth Records compilation ‘Thinking About Moving to Hastings’, I knew I’d found something special. I loved the injured, Cockney boy swagger provided by Euan Hartley and the pathos of the lyrics. I loved the winning combination of melodic guitars and keyboards of Albert John and Chris OC, combined with the indispensable, pared-down rhythms provided by Drew Fillary on bass guitar and Dean Porter on drums. I was smitten. The blues-tinged indie rock of ‘Furies’ and ‘Deptford Love Song’ have been staple listening since then. When I found out about the impending album I was in seventh heaven.

Pit Ponies are billed as a ‘real’ working class band. Given the blurred lines around the boundaries of the British class system, this could just be another meaningless statement, but their music has a down to earth quality which can’t be denied. It’s hard to imagine the band in the back of a limousine, to be truthful. Pit Ponies don’t need to pull you into their world – you already live in it. Their stock in trade is the mundane, the beauty and tragedy found in everyday life.

Hailing from Upminster in Greater London, the band was formed in 2013. They took to rehearsing over a charity shop surrounded by empty properties, which somehow seems an apt metaphor for the type of music they produce, magnificence stemming from hardship and dereliction.

‘Mountains’ starts the album with style, the introduction is pure Pit Ponies, sweetly melodious, setting the track up for the vocals. It’s a strong number, with a catchy chorus, excellent musical phrases and memorable lyrics. Yet, there’s a certain sadness to the song, a yearning for what might have been, a tinge of regret.

The keyboards of Chris OC on the introduction to ‘Life Pt. II’ are outstanding. The refrains are simple but effective and really add to the distinctive Pit Ponies sound. The chorus is maybe a little bit in-your-face for me, but I can still see people loving it. ‘Country Song’ has more excellent guitars and vocals, with lyrics again speaking of better times, but the music remains up-beat and joyful. It can’t top ‘Welcome to the Unhappy Bit’, though, with its refrain of ‘this can’t be fun anymore’, one of my favourite songs on the album. The lyrics on this piece are outstanding and the guitar contribution by Albert John is excellent.

I’ve already mentioned ‘Furies’ as an iconic track. This is one of my favourite ballads of all time and I find the whole composition breathtaking. The music is lush and extravagant, sitting close to perfection. I couldn’t have had a better introduction to the music the Pit Ponies produce. This song shows pure class.

‘Take a Shower’ has a tough act to follow placed after ‘Furies’ on the album. The softer feel at the beginning of the track leads into more fine bluesy rock, another superbly melodramatic song. The piece has magnificent, soaring vocals and, in places, a grandiose quality. I loved the lyrics on ‘Quality Goods’. “You’re smashing up other people’s guitars” is a classic line. ‘Life Pt. I’ has a first rate rock introduction drawing the listener into the main part of the song. The refrain “Life is so short”… sung as a backing to the main vocals, is splendid. The track barrels along, pulling you with it. It’s another winner. I can picture festival crowds singing along to this one.

If I had to pick the weakest track on ‘Magnificent Second Occupation’, it would probably be ‘Becoming’. Not that it’s really a disapointing track, but the competition here is so strong it pales a little by comparison.

The boys obviously decided to finish with a belter. ‘Chasing Skirt’ has all the best qualities of a Pit Ponies song. The bombastic, grandiose music, with fine guitar work set against a background of excellent drumming and keyboards, topped with forceful vocals. A bit of drama to finish this excellent album.

Overall, ‘Magnificent Second Occupation’ shows strength and musical maturity. The style is a little rough around the edges at times, the vocals a little fractured, which only adds to the charm. Having been fortunate enough to catch them live, with the also excellent Bat Bike, in Brighton, I can tell you their live set is also spot on. This album is well played, well put together and well written. My only regret about the ‘Magnificent Second Occupation’ is that it’s missing ‘Deptford Love Song’, another favourite of mine, but as it’s featured on ‘Thinking About Moving to Hastings’, I’m just splitting hairs. I may be coming across as a crazy fan girl here, but I can’t recommend this highly enough. Make the effort to listen to this. It’s worth it.

Further information on the band is available at their website: pitponies.org and on Facebook. To hear more music by them hit up Soundcloud.