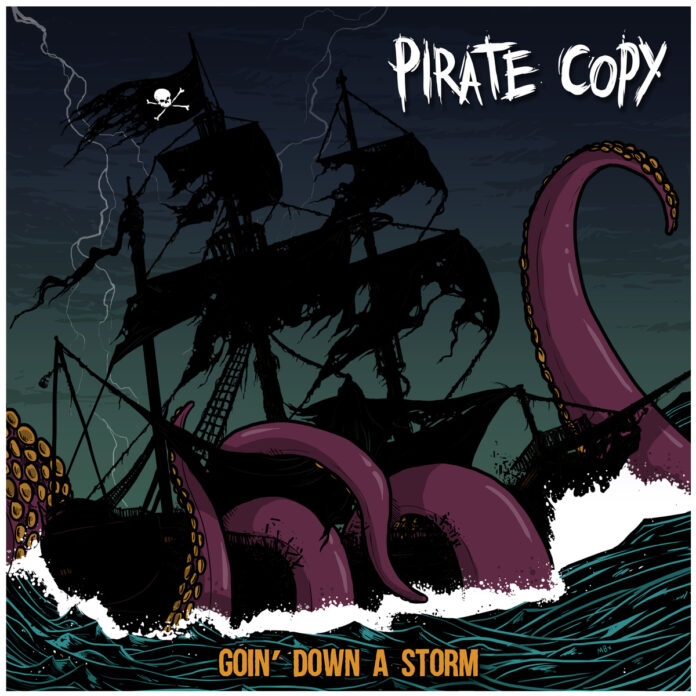 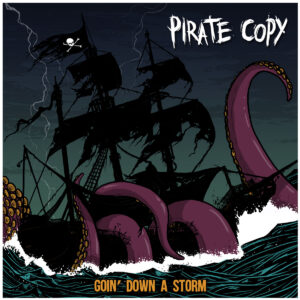 Pirate Copy – Goin’ Down A Storm

Renowned for rumbustious live performances, I was worried that this EP from Cornwall’s buccaneering punks Pirate Copy was going to fall foul of the ‘you had to be there’ factor when constrained within CD or MP3 players in people’s homes.  How many times do you buy a CD after an awesome gig only to feel it somehow doesn’t have the same energy that really only comes from a live act?

It’s true that when fuelled with cider – or maybe rum or grog – in front of a festival stage then it’s you’d be more likely to be jumping around with careless abandon as the pirate-bedecked swashbucklers bombard you with power chords and growling lyrics and crowd participation.  Listening at home or in the car though does go some way to recreating that feeling.

Title track ‘Goin’ Down A Storm’ begins with a drumbeat and soon kicks into a heavy guitar laden riff and gravel-voiced lyrics barked at you. Shouted backing vocals kick in luring you to shout them back to your stereo, it’s not big nor particularly clever but it’s great fun nonetheless.

The lyrics essentially offer a biography of the band and how best to enjoy them – which seems to involve consuming a fair amount of alcohol, and certainly played in drink-laden environment is where this is optimum.

There are two more tracks here that I actually enjoyed more than the title track – ‘Lure of the Sea’ is a real foot tapper with chugging power chords and less of the self-referencing.  The chanting chorus is pretty catchy and you’re even treated to an extra blast of it with a false-finish shortly before the end of the track.

‘Whirlpool’ finishes off the EP – a two minute track with a half minute power-chord and vocal drenched intro at a slow pace before kicking in to full speed and again – it’s basic and to the point but enjoyable on those terms, and the advice to ‘make the most of every fucking day’ could well be something of a mosh pit anthem for those festival goers watching Pirate Copy performing it live.

There’s an element of unashamed pirate-themed novelty act here, but this is a fun collection of punk songs with a piratical theme – but that theme could be difficult to detect without a band larking around a stage bedecked in tricorn hats, bandanas, treasure chests and bottles of rum.  I still think that getting your pirate costume out and getting down to a Pirate Copy gig is probably going to be the more rewarding option, but this EP surprised me with its infectiousness and fun.

~
Buy the RP from Bandcamp.
Pirate Copy can be found on Facebook.