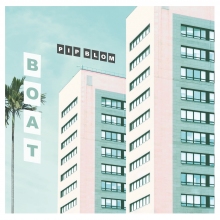 Within the last 12 months, Pip Blom has released one EP, had two A-Listed singles on 6Music, had a successful headline tour of the UK and signed to Heavenly Recordings. Now Pip Blom sees the release of her debut LP, Boat, which is a consistent, optimistic and forward-looking indie-pop record. Rhys Delany reviews.

Pip Blom has been on an upward trajectory for the past couple of years. I’ve been waiting patiently since first hearing the single, School, on 6Music. Within that time I’ve seen Pip Blom play powerful live shows in both Salford and Manchester and thoroughly enjoyed 2018s EP, Paycheck. Therefore the announcement of an album was nothing short of exciting.

The album opens with lead single Daddy Issues and sets up the album for exactly what it should be. A positive yet punchy sounding record with typical coming-of-age style tunes. Daddy Issues hits with a catchy chorus and smooth guitar licks. The second single off the LP, Ruby, is found later and retains a more of the same feel.

With this album being released at the dawn of the summer months, it brings with it a bright optimism. I can’t see this album being revered in years to come but certainly scratches an itch for indie-pop music that isn’t bogged down in post-Smiths melancholy. It makes for a pleasant change to hear an album that isn’t afraid to have fun.

Tired is a personal highlight. This is a song that echoes The Breeders, circa Last Splash. Again the crunching guitars and steady drum and bass rhythm keep you hooked. In a similar vein, the tracks Say it, Bedhead and Aha bring a wistful charm to a relaxing record.

However, when listening to this album, I can’t help but feel some of the earlier singles such as Truth and School and 2018s EP, Paycheck, set a bar that is yet to be raised. Then again, this is only the first album of what I assume to be a healthy career.

Overall, the album is enjoyable, nothing groundbreaking, but a good time nonetheless. And I’ll keep my fingers crossed for a singles collection at a later date.

Boat is released May 31st, with a UK tour to follow and various European festival dates, which can be found below.