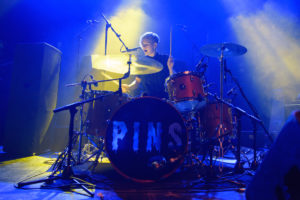 One of Southampton’s finest and most well-established music venues played host tonight to a (mainly!) all-female extravaganza of punk n’ roll mania on an archetypal rainy weekday November evening.

Unfortunately, I arrived to late to catch the first support band Threat System. I walked in just as they were ending on their last track, rocking out a tongue-placed-firmly-in-cheek cover of Wheatus ‘Teenage Dirtbag’ in their own inimitable style. They seemed to be well-received by an-already packed Joiners crowd who turned up early to support this local band.

Next up were London-based Yassassin, who’ve been the main support for fellow all-girl 5 piece and headliners PINS. They were quite delightful to watch and kind of reminded me of a punked-up 21st century version of The Bangles. Certainly, in places lead vocalist Anna reminded me somewhat of Susannah Hoffs, with her honey rasp, long wavy tresses and great use of the tambourine. maracas and mouth organ.

Musically tight and clearly enjoying themselves the girls launched into upbeat, sassy tracks such as ‘Social Politics’ and ‘Cherry Pie’. In other tracks, there were echoes of The Breeders too, the bass and guitars slicing nicely through the distortion. Members of PINS were spotted jigging along in the crowd, of which; by and large, it has to be said were male!

As for PINS then – well, I have to say I’ve been waiting many years to see an all-female rock band do what they did tonight! Sultry, smooth but with fierce super-heroine attitude; tightly coiled like a cobra, they slunk onto the stage and then proceeded to rip it up to pieces. It was their first time playing Southampton and I’m not sure what the crowd were expecting but quite possibly not to as bowled over as they were; it didn’t take long for the audience to be won over by the sheer force of PINS’ attitude, energy and musicianship.

Oh yes, the sisters were doing it for themselves – and for the current and future generations for female punk and rock musicians in a still very male-dominated environment. For me, I will unashamedly say they were a revelation; an-all female alternative rock band whose tracks were fast, furious and full of conviction, yet they also looked the part, not deliberately dressing down, vamping it up whilst girlishly likable, buoyant and fun. Lead vocalist Faith has a voice which cuts air as smoothly as a carving knife. Effortless stylish and sylph-like she prowled the stage, looking for prey amongst the crowd; tension being cranked up further by bassist Anna and guitarist Lois, slicing up a storm, with drummer Sophie knocking out a tribal beat. Their set straddles post-punky material from first album ‘Girls Like Us’, second album ‘Wild Nights’ and newer material and electronica taken from their current EP ‘Bad Thing’. Up-tempo tracks were wonderfully revved up by keyboardist/guitarist Kyoko. Indeed the title track from the ‘Bad Thing’ EP is a stormer of a track and a delightfully distorted chaotic earworm.

They ended on the anthem ‘Girls Like Us’, beckoning the scattered – and fairly few, I might add -females in the audience to come and join them at the front. After a fabulous and frenetic few minutes then, PINS exited the stage leaving bass and guitar amps on to tease feedback into the room, whilst the crowd chanted for more. They returned to an encore of 2 more tracks, this time inviting those of both genders up onto the stage to join them in their final moments. A wonderfully raucous time was had by all, dancing and writhing away (including this reviewer) with one enthusiastic punter grabbing the tambourine and jigging along next to Anna like he’d been there throughout the whole time. Thought of employing a Freaky Dancer…?

Afterwards, the merch queue was almost conga-like. It took me several minutes to get to the front and deftly purchase an EP before they sold out. Which I believe they did, along with almost other album and T-shirt on display.