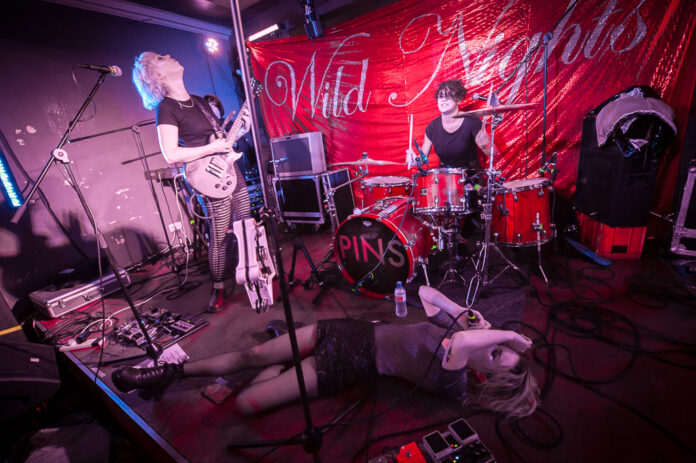 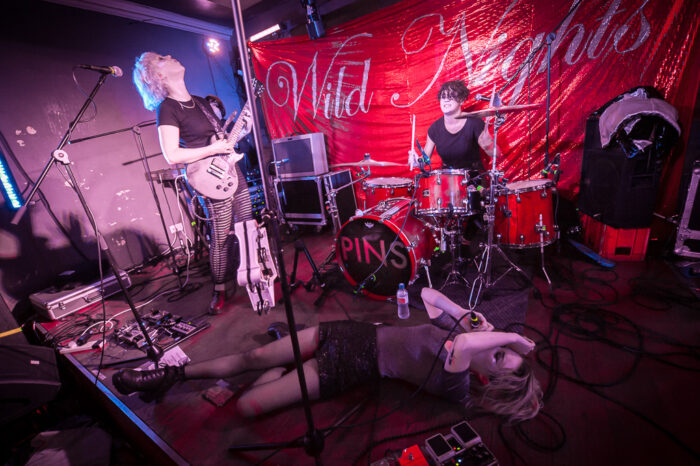 New Years Eve used to be such a big deal but in the past decade it has become this tawdry spectacle of once a year drunks and retro club nights with DJ’s playing thirty year old songs and pools of fresh vomit from the annual amateur night out mob decorating the city centre pavements.

Nearly everyone you know stays in with their heads under the duvet waiting for it all to just fuck off.

The good news was that this year one of the best bands in Manchester, PINS were throwing their own new Years Eve party at Night and Day. So instead of pining for Berlin and its glorious New Years Eve party with the added extra of an Einsturzende Neubauten gig we got one of our fave up coming local bands PINS playing in town instead.

The band have been so long on the verge of breaking through that we can’t really still call them ‘new’ and this end of the year bash is a useful dividing line that will hopefully fire them away from up and coming to new mainstream and 2016 must the year when they finally go over the trenches.

This gig underlines everything that they do so well – starting with the great songs that somehow combine classic girl band pop with a scorching, stripped down post punk dynamic. Like the Shangri La’s jamming with Kleenex this is an exercise in the possibilities of perfect pop. There is space and tension in their sound and plenty of imagination in the way they use their instruments. Lead guitar lines are spidery and ultra catchy, the rhythm section is tight and heavy and Faith Vern has a great voice – a classic pop voice  – all pain and anguish and melody and celebration that helps to define the songs and makes them cut through. When the rest of the band gang up for the harmonies PINS sound unstoppable like a tidal wave of classic pop and wiry, angular guitar thrills.

Faith also has an effervescent stage presence that belies her tough edge as she slashes the rhythm out on her guitar as the band drive their songs into the mosh pit and bounce around her making a great noise and delivering so many great songs that it can only be a matter of time before they own it.

Support came from new young local hopefuls Flesh – 4 blokes from a rambling 24/7 party central squat in south Manchester who are living the dream and sound like one of those bands who play together all the time. They have everything nailed down perfectly – the band is tight, the playing perfect and they currently veer into Oasis country with those Liam-esque vocals. The sound mix was a bit rough so the guitar player’s defining parts disappeared into the muggy air of the venue so it’s hard to know if they have that icing on their high decibel cake to cut through.

There is something good about Flesh though, we’ve heard the demo but they need that touch of madness or that touch of genius to explode from the support band rung and in 2016 they will probably find it.