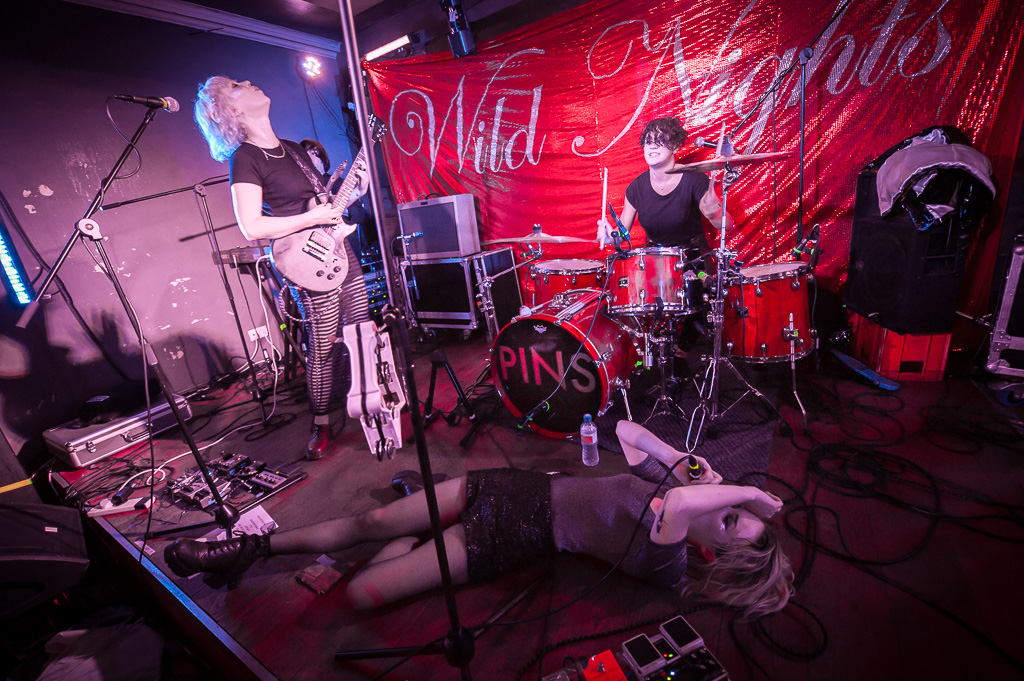 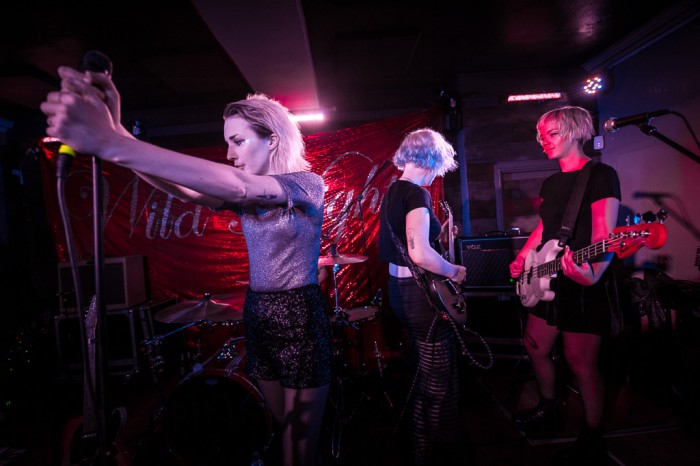 Photo above and all others on this page © Valerio Berdini.

Tonight is a bit special.

It feels like PINS have moved up a level. The venue is packed and the band are on fire. This is a new PINS. A different PINS. What was once potential is now reality. Formed in 2011 the Manchester based band have always been great value live, their early days were scratchy lo fi thrills with that adrenaline buzz of a new band combined with Faith’s great pop voice and that rush of melodic honey over the guitar scuzz.

Their recently released and acclaimed second album, Wild Nights, saw them take control of their art and produce an album that combined their angular post punk with the everlasting yeah genius of the sixties girl groups with that sense of pop drama and cliff top melodies that makes those historical records so timeless. PINS don’t just make a nod to this music they entwine it with their own sensibility and have created something quite special. 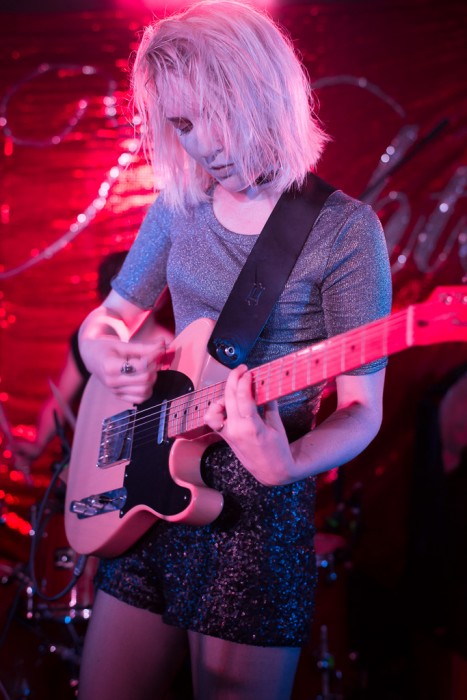 They still deliver the rush of sound that is rooted deep in the post punk period when rock n roll was reconstructed on different terms. There are still the stop/starts and breathless dynamics but the added pop gloss really suits them. They have the harmonies nailed down and the really well thought out structures of the songs make them thrilling to listen to.

The endless touring has paid off as well. This hometown gig sees the band sound bold and powerful, the rhythm section is a monster and Sophie is a great drummer – all pounding power and finesse.

Like all bands that are hitting their stride they dare to drop down and play sparser, slower tunes that really underline just how good they are with those gum chewing backing vocals spitting attitude and the melodic thrills and the darkness oozing out. But they can still deliver perfect tunes rush like on Dazed By You which sounds like a classic pop song that could have come out in any decade you want to choose – it has everything we love about PINS in one song – from the hooky, almost Buzzcocks spindly guitar lead line, the scratchy rush of Faith’s telecaster dealing out the rhythm, and the rhythm section power rush and the great chord changes and the manic pop thrill of the ending – it’s a perfect rush of sound.

When they end with their cover of the Misfits Hybrid Moments the girls that they have cajoled to join them down the front have now invaded the stage and are dancing the crazy dance to the band’s exciting stomp over the song from the ghoulish New York band who have become legends in the last ten years.

PINS have been knocking on the door for too long – tonight’s sold out gig is from a band that is about to kick that door down.

Photo gallery below taken at the Portland Arms in Cambridge from the opening date of the tour.

All pis are copyright Valerio Berdini whose excellent website can be found here: valerioberdini.com. You can also keep up with Valerio on twitter as @liveon35mm.