It seems like every year we catch up with PINS at Sound City – last year they played a great set in a tiny cellar venue and have been on an upward glide since then with record deals and 6music and press and all the trappings of the modern indie band on the up.

Tonight they have the confidence of a band on the cusp.

Somehow they manage to combine their spiky underground guitar action with the classic echo of girl pop. There is now the added swagger of the Shangri La’s and girl bands of all ages to their sound – those dramatic girl chain and the gang melodies worked into their sparse and tense songs and it really works.

Singer Faith Holgate has the voice and the moves to be an indie pin up as she twitches around her guitar scratching out those great cheese greater riffs that kling and klang with guitarist Lois McDonald’s sinewy guitar- its a great tension and great dynamic that forms the bedrock of the songs against the powerful and driving rhythm section. Faith has an indie girl cool that makes the concrete parking lot of tonight’s venue glow and the band look like serious proposition even in the dingy damp concrete of the guerrilla venue at the Sound City music event. 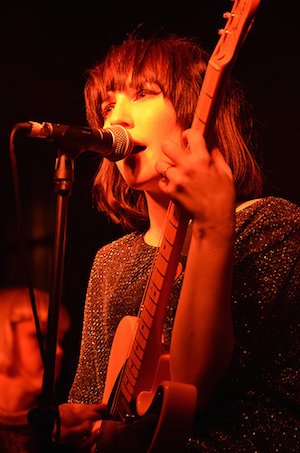 PINS are always mentioned in the blah blah blah about new v old Manchester, with pundits taking sides and claiming that they are not ‘typical Manchester’ like that really matters. We are not even sure what typical Manchester is any more as the city music scene sprawls over multi genres- some claim the band are more Brooklyn than Manchester forgtting bands like Bandit Queen and many others who have trodden this shrapnel pop path before. All that matters is that PINS are here and now and are sounding fervent and vibrant and truly ready. This was a great gig – perhaps a real highlight in the Sound City band event.

Song wise the set has no weak points.

PINS are no longer up and coming hopefuls but a fully formed serious proposition. All they have to do is escape the tightly clamped jaws of hipster indie and escape into the real world- they have the songs, the attitude, the look- the famed sex, style and subversion of punk rock.

PINS 2014 are what a modern pop band should really sound like – laced with acidic melodies, sharp guitar and tough rhythms this is a future…