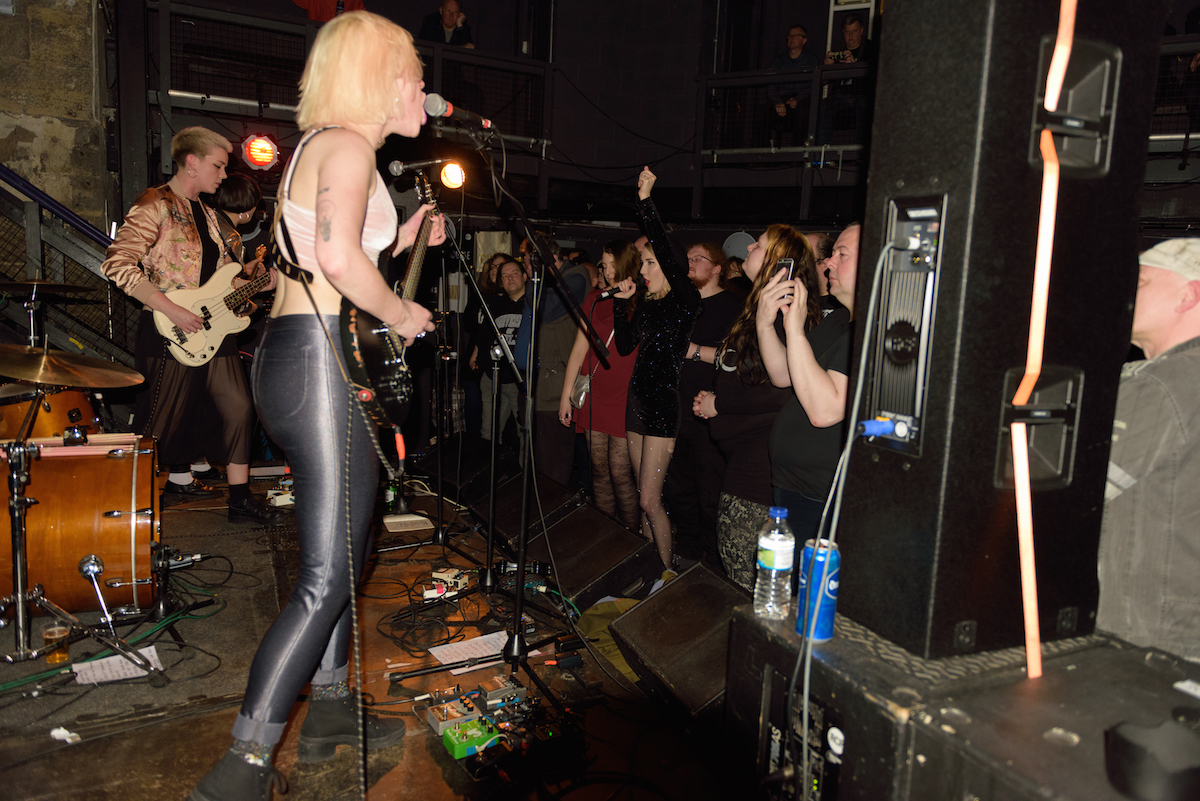 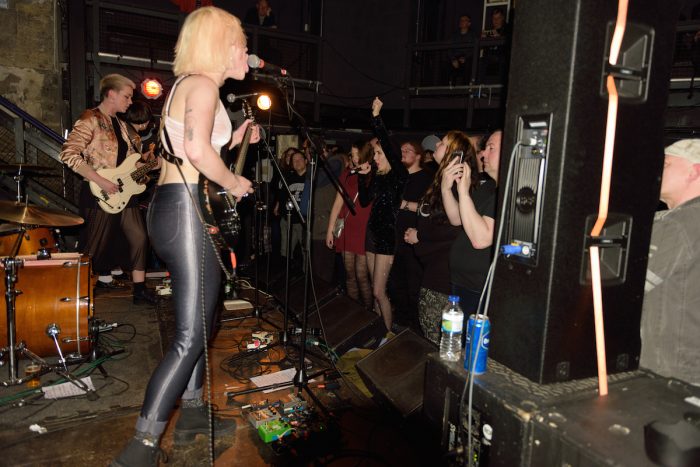 PINS once again prove that they’re one of the most underrated bands in the UK, their new tracks leap out and demand your attention tonight.

Having released a single featuring Iggy Pop and then followed it up with a stellar EP, PINS are truly on fire at the moment. Aggrophobe sees the band tackling a darker sound, with a more sinister beat and Iggy Pop’s vocals only compound the haunting elements of the track. That aside though there are two opening bands for tonight’s show the first being Yassassin, who seem to possess all of the energy but lack any originality.

Their ramshackle set pours with enthusiasm and passion but the tracks feel lacklustre, there is some potential but it appears to be lost in the bluster. The same cannot be said for Denmark’s Baby In Vain, who crank everything up a notch. Seething drums thunderous bass and shouted vocals forming the backbone to this intense set, the chugging tracks drawing on rock and metal influences. Offering the originality that we craved for from Yassassin, it’s an impressive set albeit somewhat deafening.

As PINS take to the stage, they kick proceedings off with the aforementioned Aggrophobe as they set the brooding tone for their set. It’s a set which draws mainly on new material, with all tracks from their latest EP getting an airing. Old favourites like Young Girls are still played with same fervour that they’ve always deserved, but it is the draw of powerful new tracks that has us hooked this evening.

The likes of All Hail and Death’s Door sounding particularly impressive, the heavier bass and sharper drums coupled with the sinister vocals adding an exceptional new facet to PINS live show. A cover of Joy Division’s Dead Souls takes many by surprise but it is a welcome one, it sustains the heavy tone to their set. You cannot help but fall under their spell, these harsh tracks mixed against the otherwise jangly guitars.

PINS appear to have shaken off those tracks which were deemed rallying cries and instead replaced them with the gritty realities of life, the stark contrast between the tracks shows. Both facets warrant their individual plaudits, with the new material arguably more enthralling than ever. The power and passion which the tracks are delivered with is to be lauded, PINS tonight are better than ever.

However, it isn’t all doom and gloom as they close out their set with a hefty stage invasion, inviting anyone who dare take to the stage for a rousing encore featuring Dazed By You and Waiting For The End. This is PINS at their finest and we cannot wait to see what they do next, based on tonight it is sure to be incredible.