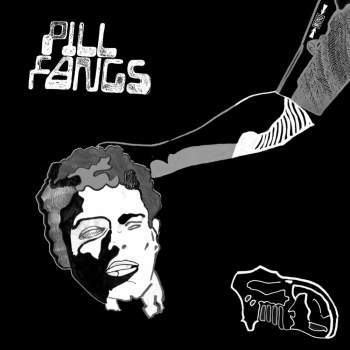 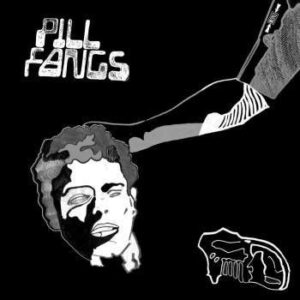 Dan Haywood, Pill Fangs guitarist/singer/songwriter is a Black Country wordsmith, more accustomed to working in the acoustic and folk circles on such acclaimed albums as Dapple (2013), New Hawks: Field Notes (2012) and Dan Haywood’s New Hawks (2010). For the group Pill Fangs he is joined by Richard Turner (of Three Dimensional Tanx), Rob Daniels & Simon Fletcher, to create a glorious, thrilling homage to New York rock of the 70s. In particular the nervous, jittery, amphetamine driven rock of Richard Hell & The Voidoids, and the simple yet surreal blistering of the Velvet Underground/Lou Reed, with hints of Talking Heads.

The album sounds like a liberation for Haywood, something that rock can offer from the chains of a folk scene that can still be precious. Do we hear anyone shouting Judas as they listen to this record? It’s recorded in mono which in itself shows a bloody single-mindedness, but it works perfectly. This is a band having fun with the creativity spurting out in a rush of adrenaline. This is music that is angular, jerky and nervous. The guitar solos are edgy, pulled and bent like a nerve stretched to breaking point, or like a stuttering, spasming teenager on a first date. There are false starts, false ends and pauses. The rhythm is a cardiac arrest waiting to happen. A melancholic paranoiac nightmare of tension trying to break out into creativity.

However, Haywood does not succumb to a NY drawl, his vocals have a distinctly Black Country twang and lyrically he lets his mind wander to create surreal images, street smart cool and a dreaming scenescape.

The opening track, Bison Grass, sets out the premise with a blistering wall of sound and lyrics proclaiming a change from folk to rock. This is followed by three songs that are quick, nervous and short assaults on the brain, sounding like Richard Hell spliced with Lou Reed. We then get Surface, an eight minute long Velvet Underground influenced song. It builds up the tension with pounding, bestial drums, a heartbeat getting faster and faster in a city full of too much noise and pressure, filled with crazy eyed mad men, the hands of grasping beggars and the fading away of beauty. The vocals are edgy, sounding on the verge of a nervous breakdown, and lyrically its a stream of consciousness that mentions Blackpool and Sharon Stone. Mary Rose reminds me a bit of the Modern Lovers and I Turned A Corner has a more funkier sound. Material Girl has a simple, savage beat. This is Rock and Roll distilled to the agitation of young males – all jerky, spasmodic, energetic, sexual energy sublimated through guitars, bass and drums. It’s the classic prom girl put down conjuring up the American mores of John Hughes flicks that gave us the stereotype of US colleges where even the poor kids had cars. After another heavily influenced Lou Reed song – Ax and Luggage – we get a blistering version of Cohen’s Tower of Song. It’s a glorious, back to basics version that substitutes Lou Reed for Hank Williams in the 100 floors above me line. It’s all finished off by the song Exodus, which has a great funky rock riff which finally descends into feedback for a few minutes.

Though it wears its influences on its sleeve, Pill Fangs do it so well that it just makes you want to re-visit the source material. This is a love letter to NY alternative rock. It’s music for neurotic nerds, paranoiac paramours and wired weirdos.

Put it on your stereo and tell your friends it’s a long-lost bootleg of an unreleased Richard Hell classic, and see if they call you a liar.

A release very much recommended.