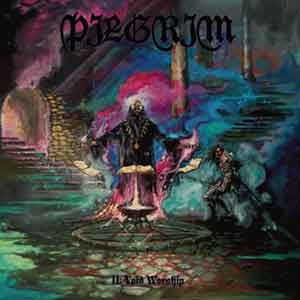 Hailing from Rhode Island, USA, Pilgrim have unleashed their second long player. Void Worship is the follow up to 2012’s Misery Wizard. Can the American doom duo strike again?

Hailing from Rhode Island, USA, Pilgrim have unleashed their second long player. Void Worship is the follow up to 2012’s Misery Wizard. A short intro opens the album before the long and trudging Master’s Chamber. At points during the ten minute plus opening opus, the resonating bass tone, or thick guitar riffs are the only things you can hear; along with the meandering drums. The dense riffs help build the sound and the track does build to a climactic end with the guitars quickening in pace before being brought again to a slow plod.

Second track, The Paladin, has an immediately more urgent riff and tempo which is a welcome change from its predecessor. The chugging riffs and distorted melody lead into a short, shrift workout. The vocal contribution on The Paladin really drives the track alongside a riff that feels uncomfortable and harsh. Whilst not having the tempo of traditional doom, the despair of doom is certainly in attendance. Arcane Sanctum follows; which brings a more harmonic slant to proceedings through a four minute instrumental.

In The Presence Of Evil opens with a very long intro with much of the décor already on show in the previous half of the album. Like the previous track, it’s an instrumental. The guitars are dense and sprawling again. It gives way to the album’s title track which is certainly a highlight of the album. Void Worship has some fantastic drum work and a haunting guitar line that is complimented well by the mournful vocals. Another instrumental interlude follows in the form of Dwarven March, before the final track Away From Here, finishes the album in the same ilk as its beginning. The tone is crushing, the tempo is slow, and the payoff is heavy, particularly in the final strains.

Whilst this album will appeal to many a doom fan, I feel that the record might have worked better as an EP, without the instrumental interludes. I don’t feel that the interludes add anything to the excellent main tracks here. As previously mentioned, if you like your doom in the traditional vein, this will satisfy your ears, however the album doesn’t offer anything ground breaking.