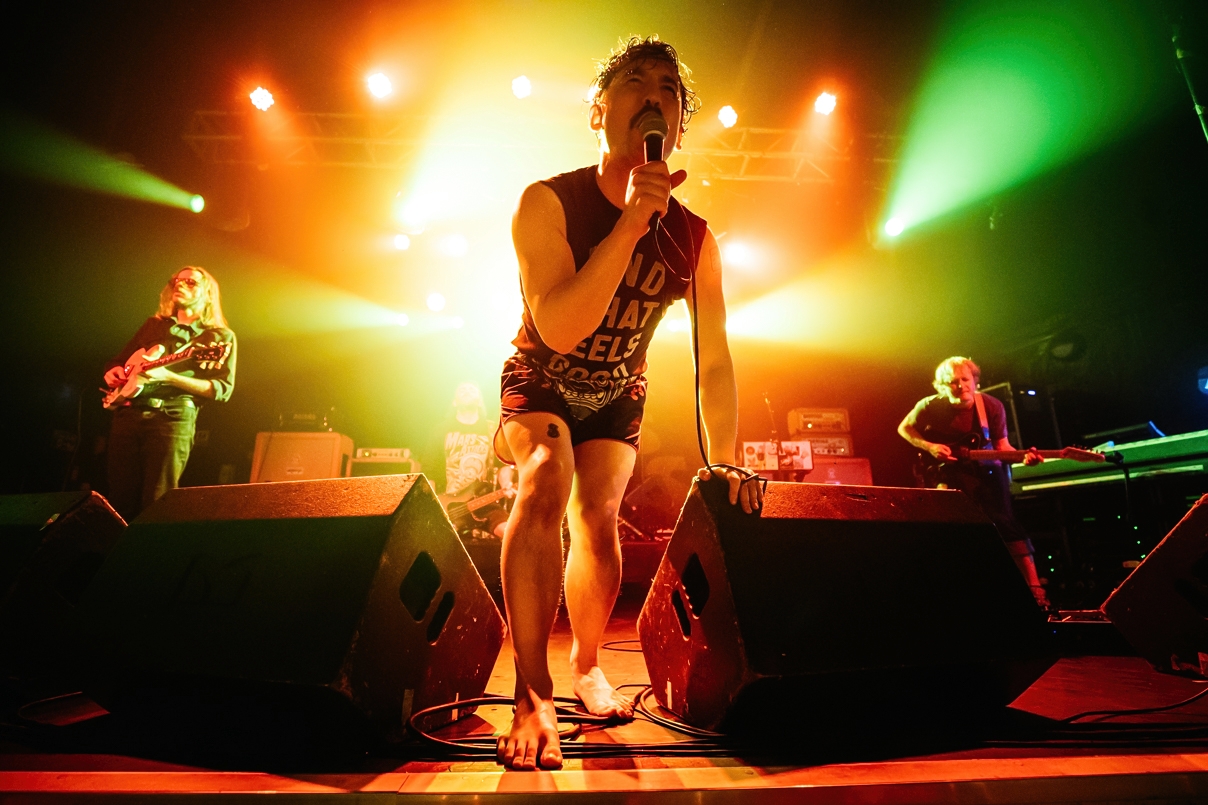 It’s in Matt Baty’s roar as he delivers lyrics about everything from self-esteem to religion. It’s in the brutal tectonic riffs laid down by guitarists Sam Grant and Adam Sykes in Black Sabbath-on-steroids anthems like Halloween Bolson. It’s in the unflinching rhythms of drummer Chris Morley and bassist Johnny Hedley that make the group sound like a marching herd of mastodons, right from the very opening beats of show-starter Reducer.

It’s in former drummer Baty’s unique moves – a cross between martial arts-inspired gestures and traditional Russian dance – that continue even as he steps back from the microphone to pour bottled water down his throat and over his head. 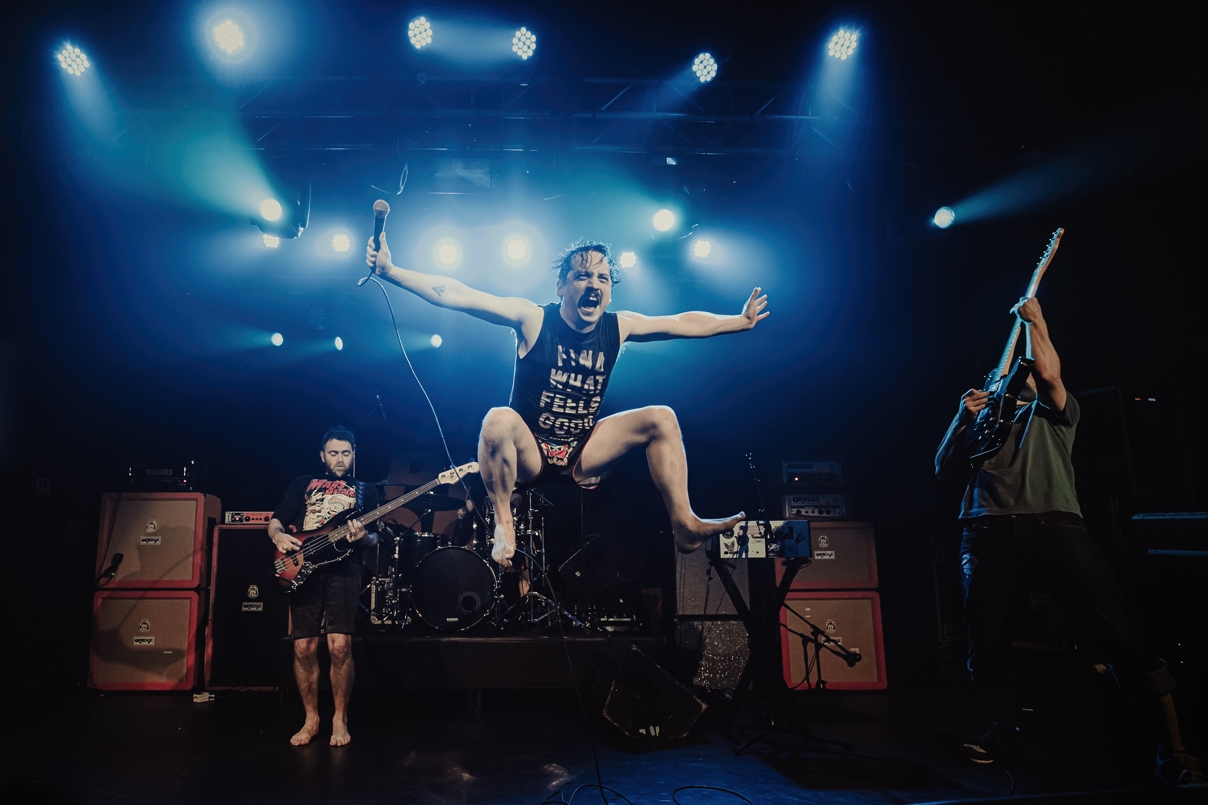 It’s in the frontman’s self-deprecating, sometimes surreal, onstage banter. He quotes Jimmy Nail (“Clearly a big influence,” he deadpans): “My crocodile shoes are crying too, For they know how much love I have for you”. Dressed in shorts and a sleeveless “Find what feels good” T-shirt, and sporting a moustache, he compares himself to a Poundland Freddie Mercury.

After revealing the band’s ambition to “stimulate you physically”, he jokingly aims to “challenge you mentally” with a would-you-rather question from Sykes. (One involves being cellotaped to Noel Edmonds on a Megabus, the other to Ross Kemp in a Ford Fiesta while listening to Sheryl Crow’s All I Wanna Do on repeat.)

And, following a particularly seismic wave of downtuned sludgy riffing and pulverising caveman rhythms, Baty grins “That sorts the wheat from the chaff, that one”, before promising to “play so hard it’s going to make us violently sick”. They don’t quite deliver – nobody collapses in a heap on stage – but it’s not for lack of trying. Despite Omicron understandably clearing out public transport, the streets, pubs, and live venues, Pigs Pigs Pigs Pigs Pigs Pigs Pigs never falter in their more-is-more approach. 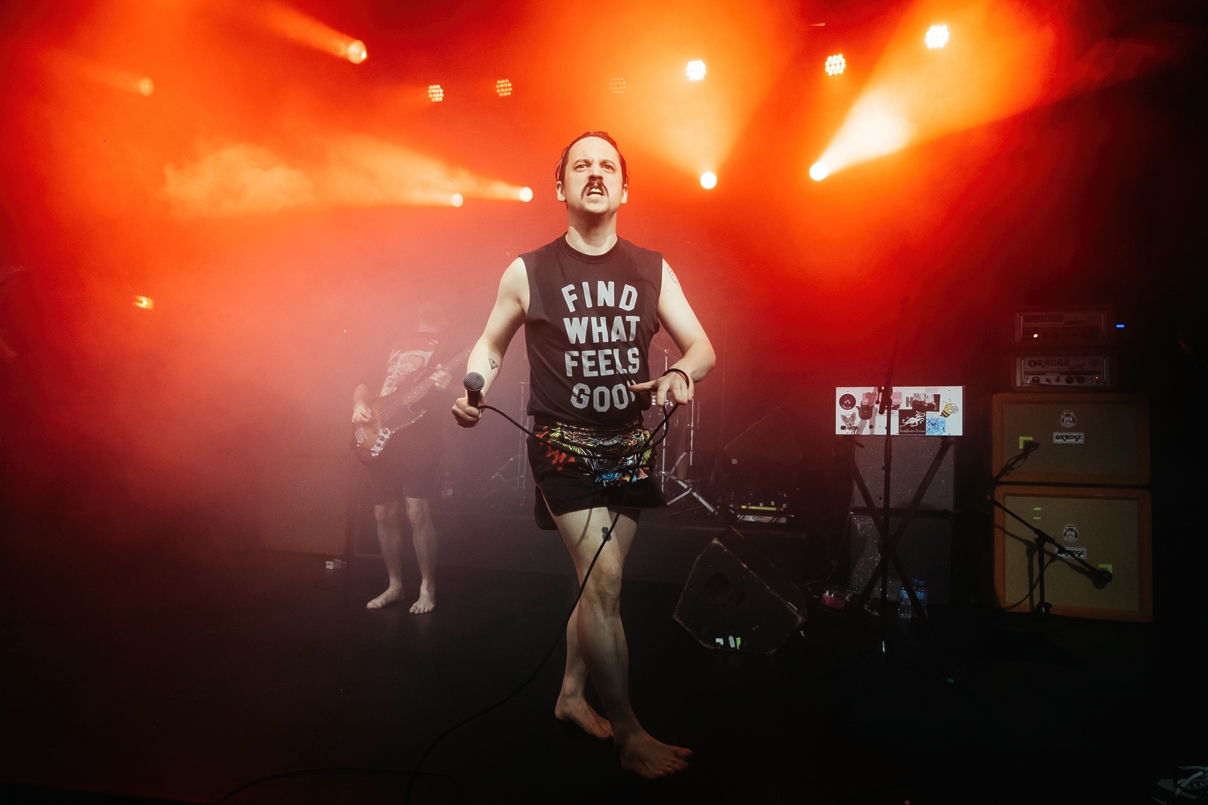 Never is this more apparent than during set closer A66, from 2018’s King Of Cowards. After nine pulverising, body-slamming metal epics, many drawn from 2020’s unwavering and perfectly named Viscerals, Baty and the rest of the band power their way through more than 10 minutes of fierce, grinding, ever-evolving metal. Unsurprisingly, it incites the audience to create a circle pit and climaxes in a kneeling Baty triumphantly holding his microphone above his head, as if wielding Excalibur.

“Therapy through noise” is how the group once described their music. At Camden’s Electric Ballroom tonight, that seems true for both band and audience.