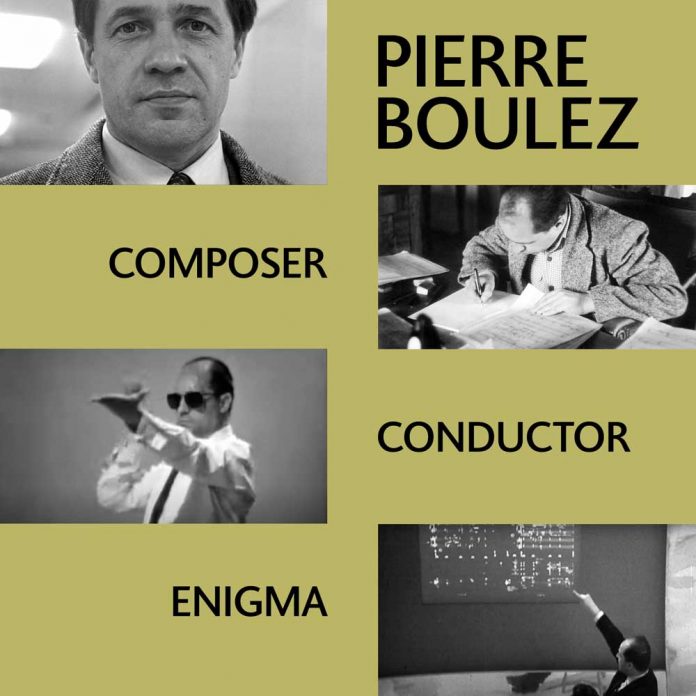 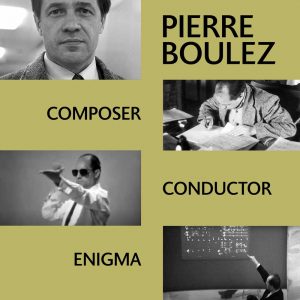 In modern times there is often a tendency to bestow the epithet punk on people employed in a variety of different art forms, even if their work predated the 1970s boom by quite some distance. Montbrison native Pierre Boulez, I imagine, would fit the bill for anyone looking to do this with reference to classical music. As well as composing he also conducted orchestras on presentations of the work of Igor Stravinsky, Karl Heinz Stockahusen and Luigi Nono. He also fulfilled this role on many operas too. With reference to the latter he lived up to his reputation as certainly no stranger to controversy, at one point stating that all opera houses should be blown up. In his projects he relentlessly applied a modernist approach to his music, seeking to forge a startling break with the past.

Composer, Conductor, Enigma catches Pierre at an early stage in his career, when he was striving to create a new classical music for the post Second World War generation. It all begins with Boulez’s Sonatine For Flute And Piano Op. 1, where Severino Gazzelloni and David Tudor on their respective instruments duel sometimes jaggedly and at other points with much fluidity. The combined effect is very much cast in an impressionistic, dramatic mode. Then we move onto Piano Sonata No. 2, recorded in Paris in 1961, which is cut into four parts. Yvonne Loriod at the keyboard excels here at a fast pace and also in a more hesitant fashion. The gentleness of the momentum and unpredictable lunges in Lent are particularly agreeable and this composition comes over as energetic and playful. It is also endowed with a firm sense of the iconoclastic that Pierre always brought to classical music.

The first orchestral piece on Composer, Conductor, Enigma is Polyphonie X For Ensemble by the German Radio Orchestra, conducted by Hans Rosbaud. It was set down on tape in 1948 and comprises of three sections that drift through a variety of tempos. Modéré opens up the suite with a tense tightness and economy, with Lent and Vif broadening out the sound in a slightly sinister but thrilling manner. RAI (Radiotelevisione Italiana) get in on the act the nimble, quirky steps of the quarter of an hour plus Polyphonie X (Part 1) and two relatively brief parts of Deux études de Musique Concréte For Magnetic Tape bring this first disc to a close. Étude 1 Sur Un Son and Étude 2 Sur Un Accord de sept sons are a riot of unearthly drones, swoops and squelches of sound, which could be seen to prefigure much of the electronic music of the late 1970s.

We move to disc two with the first vocal piece of the set, the dramatic opera of the two selections from Le Soleil Des Eaux. Irène Joachim’s soprano voice jumps through hoops on the twists and turns of the Boulez’s composition and this work forces the RTF National Orchestra into some frantic action. Then we move to the three self explanatory items from Structures Book I For Two Pianos that move gracefully and with purpose and after that we’re into the nine movements of Le Marteau sans maître (The Hammer Without A Master). Marie-Thérèse Cahn provides the voice on four of the sections beginning with Avant “L’Artisanat furieux” and the dreamlike exotica utilised throughout creates its own world of sound, surprise and suggestion.

La Symphonie mécanique musique concrète, which formed the soundtrack to Jean Mitry’s experimental 1955 film, follows and the whirls, pulses and surges appear to be a fitting sonic backdrop for a movie about inanimate objects pushed into a kind of life by factory production processes. It’s fascinating and has a lot in common with the work of BBC Radiophonic Workshop too. Pierre Boulez conducts the final offering on this part of Composer, Conductor, Enigma Poésie Pour Pouvoir, with the text taken from The Poem by Henry Michaux. A very slow, rumbling fade in prefaces a decidedly eerie, curious and disjointed piece. Michel Bouquet’s treated voice crops up now and again fleetingly, but it seems that is how the piece was intended.

The third disc of this set opens up with two live operatic selections from Pli Selon Pli (Fold by Fold) recorded in 1959, led by the sensitively applied singing of Eva Maria Rogner and Maria Bergmann on piano. Rogner’s pitch-perfect soprano is also present on Tombeau à la mémoire du Prince Max Egon zu Fürstenberg, taped in the same year. After that we have some spiky and long piano duets from Structures Book II, with Pierre himself manning one of the keyboards.

He conducts Karl Heinz Stockhausen’s squirrelling and ominous Kontra-Punkte For Ten Instruments, Op. 1 and also the two items from Anton Webbern’s Symphony, Op.21 which end the third section of Composer, Conductor, Enigma. Ruhig Schreitend starts with desperately sad horns and strings, before picking a pathway steadily with tenderness. Webburn’s Variationen then playfully stop starts and rolls with much lop-sided energy.

Igor Stravinsky’s Concertino For Twelve Instruments starts the fourth and final platter here, one which focuses solely on Boulez’s conducting. Pierre directs the orchestra here with the subtlety and intensity that the piece warrants. By the same composer comes Symphonies of Wind Instruments, where bright brass jousting with more restrained strings produces an enchanting overall effect.

Intégrales For Orchestra And Percussion by Edgard Varese has military percussion and gongs playing a key role in something dynamic that draws on some jazz/big band influences. Contemporaries of Boulez Luiciano Berio and Luigi Nono provide Serenata 1 for Flute and Fourteen Instruments (where Severino Gazzelloni’s flute again stars) and the very touching melancholy of Incontri for Twenty-Four Instruments respectively, before Stockhausen’s archive again is raided for Zeitmasse (Time Measures). Starting slowly with oboe, clarinet and flute combining, this piece uses brass instrumentation very well to construct what is an unpredictable and original sound that is also fresh and alive.

Pierre Boulez’s double-edged career as both composer and conductor was always marked with energy, innovation, irreverence and a stubborn refusal to ever take the easy option. I am by no means an expert in the subject of classical music, but Composer, Conductor, Enigma always entertains in whatever role Boulez fills. As ever él provide extensive sleevenotes that are full of information and set the scene and this collection is as well presented as you would expect. Pierre’s vision was inspirational to musicians like Frank Zappa and empowered them take risks and experiment, but his own world of music is what really counts. His early development can be grasped and enjoyed on what I found to be an intriguing and refreshing set.