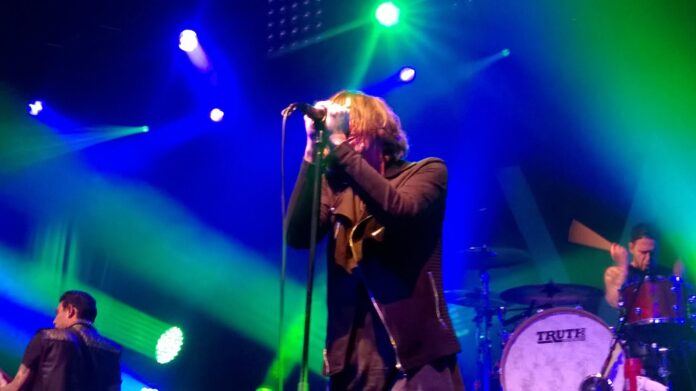 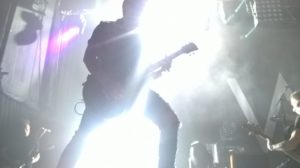 Pierce The Veil | Sleeping With Sirens

In her debut for Louder Than War Chelsey Taylor reviews the co-headline tour of Pierce The Veil and Sleeping With Sirens.

There was a lot of anticipation about the UK leg of Pierce The Veil and Sleeping With Sirens’ sold out co-headline tour. This was indicated by the masses of eager teenagers queuing up down the Manchester streets from as early as 7am, desperate to claim a good spot inside to witness the collaboration of the two post-hardcore bands. Inside the venue was swarm of band shirts, skinny jeans and, regrettably, selfie sticks, an indicator of the relatively young crowd that this line-up has pulled in.

Up first are Issues. Emerging onstage to a still half-filled venue, they immediately begin to warm the crowd up with their R&B influenced brand of metalcore, managing to get the entire room clapping, jumping and chanting along; a great feat for 7:30pm! Their songs are catchy enough and their energy sufficient to build the excitement of the rapidly growing crowd as they enter and scurry as close to the barrier as possible. A particularly strong moment is their final song ‘Hooligans’ during which they manage to get a decent sized pit going, especially considering they are the first act to play. The only downside to their set is that their songs simply don’t seem memorable enough to make a lasting impact on most people here. Whilst it is nothing these concert-goers haven’t seen before, it is certainly an ideal way to get the night going and prepare the crowd for what is to come. As they leave the stage to a finally filled, sold-out academy, a curtain is raised and the wait for the next band begins. 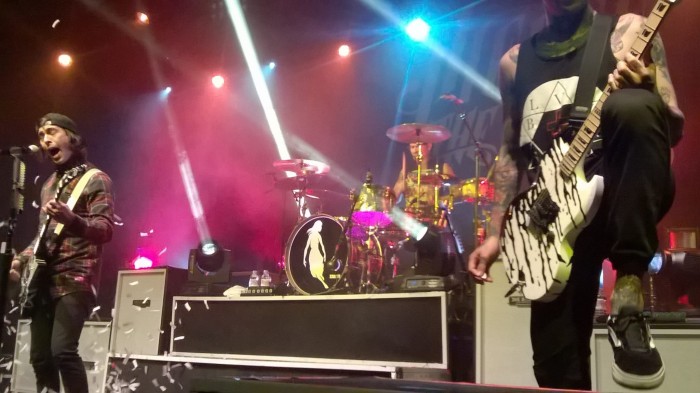 Shortly after, the curtain drops and the sheer force that is Pierce The Veil swarm the stage. Armed with enough energy to move the whole room and several confetti cannons which line the stage, lead vocalist Vic Fuentes guides the crowd through a spirited set consisting of mainly tracks from their newest release, 2012’s Collide With The Sky. Whilst fans of their older work may be left disappointed, the setlist choices seem to go down well with the majority of attendees here. Fuentes’ stamina never seems to fade and the entire band troop through the hour long set with gusto, proving that they are capable of delivering a headline-worthy set at only the halfway point of the evening. Matching the spirit of their recorded work, he masters the perfect balance between performing his songs and crowd interaction, ensuring that everyone is kept energised and entertained. The set proceeds into a welcome, calming interlude with an acoustic version of 2012’s ‘I’m Low On Gas And You Need A Jacket’. It’s a powerful moment complete with lighters in the air, arms waving and a singalong worthy of such a piece. The band, predictably, closes their set with ‘King For A Day’, the song they released in 2012 featuring Sleeping With Sirens frontman Kellin Quinn who joins them on stage to close their set in an alliance that drives the crowd wild and is the perfect way to end the set. 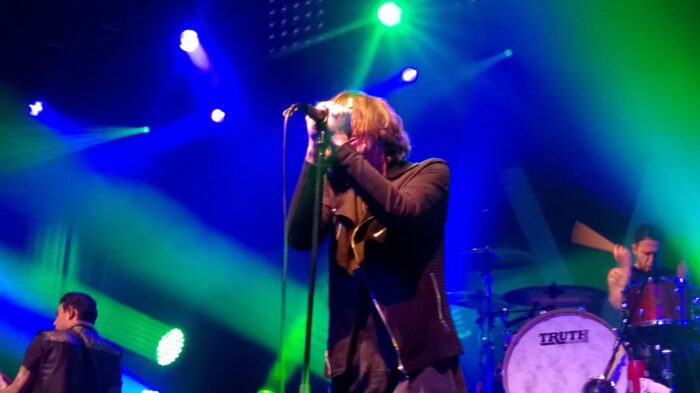 Playing a set of about equal length, it is finally time for Sleeping With Sirens to take their turn. Kellin Quinn returns to the stage, this time backed up by his own band who proceed to open up with ‘Kick Me’, a track from their new release Madness which is extremely well received. Despite the fact that from the balance of band merchandise worn one might assume the fans are split down the middle, between both PTV and SWS, the reaction to the crowd suggests that the majority are perfectly content to enjoy both as the band are greeted just as strongly as Fuentes and co. were before. Delivering a set of mainly newer songs themselves, Sleeping With Sirens knows exactly how to please the crowd, with just as much interaction as the previous band brought. What seems to be absent here, however, is the same drive and stage presence that Fuentes had. Whilst Kellin Quinn appears to be trying, the higher notes of his vocals seem to fall just a little flat and the set is missing the same bounce and energy that their studio albums deliver to listeners. There are some highlights, however; playing new songs at shows can be a risky move, but the double-barrel of ‘Go Go Go’ and ‘We Like It Loud’ goes down brilliantly following a surprisingly sweet cover of Goo Goo Dolls’ ‘Iris’, which even manages to get some of the parents waiting towards the back of the venue singing along. Despite the apparent drop in energy from the previous act, Quinn still has the crowd in the palm of his hand. He seems to know just what to say to keep the fire in the audience going, despite his slips in the vocal department. Finishing with crowd favourite ‘If You Can’t Hang’, and a vast amount of streamers fired from the cannons, Sleeping With Sirens still manage to keep the party going right up until the 11pm curfew. Perhaps they were lacking in the energy department, but most of the fans did not seem to care. When Quinn finally led his band from the stage and the house lights came up, the room was filled with wide grins and tears of joy from many, showing that this night will be one they will remember and talk about for many months to come.

Pierce The Veil are online here: piercetheveil.net. They can also be found on Facebook and tweet as @piercetheveil.

Sleeping With Sirens can be found online here: sleepingwithsirens.net. They’re also on Facebook and tweet as @swstheband.

All words by Chelsey Taylor. This is Chelsea’s first piece for Louder Than War.