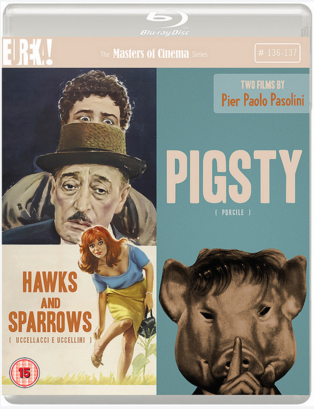 Jamie Havlin reviews a pair of films by controversial director – and Morrissey favourite – Pier Paolo Pasolini. Hawks and Sparrows and Pigsty are two of the lesser known films by Italian auteur Pier Paolo Pasolini, recently the subject of a biopic by Abel Ferrara and also namechecked by Morrissey in You Have Killed Me (Pasolini is me/Accattone you’ll be). A controversial figure with a highly individual vision, Pasolini tends to divide opinions although even his critics would have to admit that his films tend to linger long in the memory.

Hawks and Sparrows stars comic actor Totò and Ninetto Davoli in the central roles as a father and son who take off on a long, rambling walk with no destination apparently in mind. Before too long they are joined by a bedraggled raven who somehow has the gift of speech.

The creature is highly intelligent and enjoys squawking on about religion and politics, two subjects that clearly interested Pasolini – during the first half of the 1960s, he penned a regular column for Communist periodical Vie Nuove, while his previous film had been The Gospel According to Matthew.

The raven tells a tale that magically transports the two leads back to the 13th century in a strange allegorical story-within-a-story where the pair are friars, Brother Ciccillo and Brother Ninetto, persuaded by St. Francis of Assisi to attempt to convert local birds to the teachings of Christ. 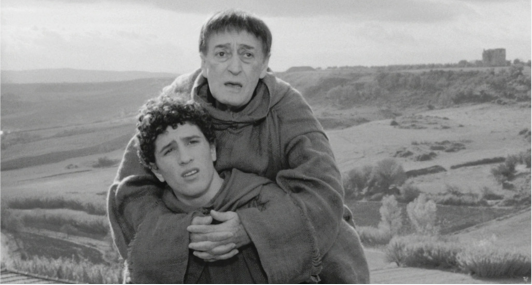 Ciccillo (Toto) has success with some hawks and watching Ninetto play hopscotch, he has a brainwave: sparrows communicate by hopping rather than chirping, which makes his task of converting them a lot easier.

A hawk (the oppressor) then swoops down on and kills a sparrow (the oppressed) and we’re back to the picaresque adventures of father and son in modern day Italy.

It’s a playful piece which is also experimental – Pasolini had certainly moved a long way already from the neorealism of his 1961 debut Accatone to what could be termed neo-surrealism.

Although difficult at times to fathom I found the film fairly enjoyable, especially the wonderful score supplied by Ennio Morricone.

Pigsty consists of two intercut parallel stories, one set in the summer of 1967 as student rebellion in West Germany and across Europe is on the rise, where Julian Klotz (Jean-Pierre Léaud) and activist girlfriend Ida (Anne Wiazemsky) debate love, their enigmatic relationship and revolutionary politics; the other story is a largely dialogue free piece, featuring a wandering cannibal in what I would guess to be the late medieval period.

Neither strand particularly gripped me and the satire of the more modern storyline was too simplistic for my tastes: Julian’s wealthy industrialist father, for example, has a Hitler moustache and haircut. Some images, though, are visually stunning and haunting, such as the cannibal hurling the severed head of a lone soldier he has slain deep into the throat of a burbling volcano that spews clouds of black ash into the sky – these scenes being shot around Mount Etna. 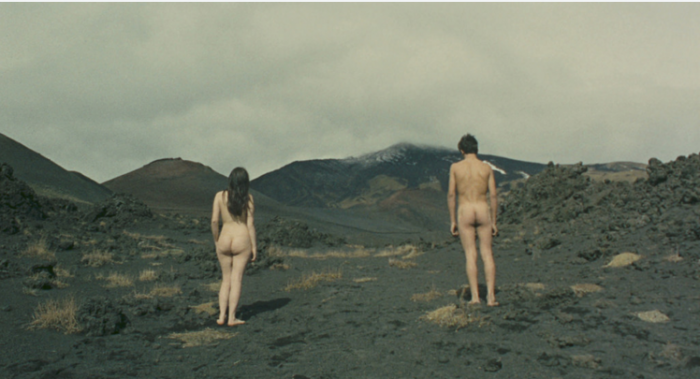 Hawks and Sparrows and Pigsty are both beautifully shot and formally daring but both are also very much of their time. Many cinephiles will undoubtedly be interested in seeing these films but I doubt that the average viewer today would take much from either of them.

Extras include a booklet with essays and interviews as well as trailers for both films.

For more on the films visit the official Eureka! Masters of Cinema website here.