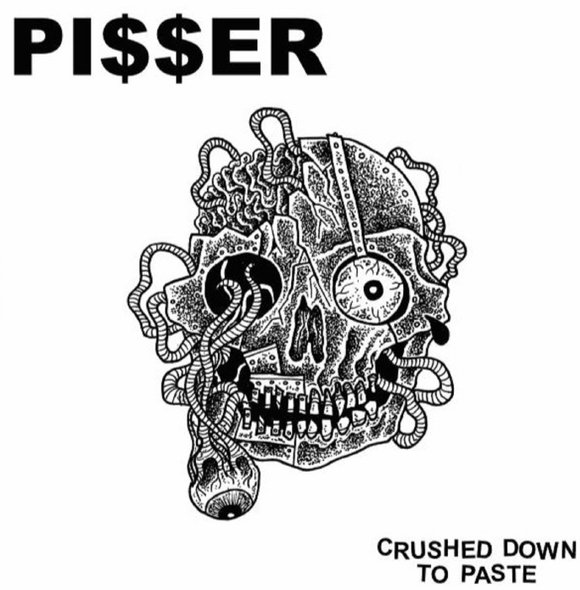 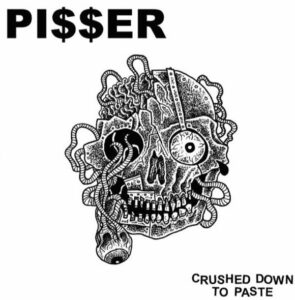 A follow up to last July’s debut of d-beat, punk and saxophone from this project based ensemble adds psychedelia and jazz influences to the mix delivering up something that could wow a diverse crowd says Nathan Brown.

I thought Pi$$er must be having a healthy laugh at themselves when they talk of Jazz Wasps on the opening track. Not far off from “a goose being chased by a swarm of bees” as I’d referred to them on their first release.  Saxophone through delay that would make Nik Turner proud, with poetry read by the gruff troll whose bridge you were trip trapping across. Having said that, they implore or invite the listener to “Clear out your holes with some jazz wasps”. Then they go on to deride the closed minded attitude of some in the punk scene.  “You’re living on a diet of decades old slops, so you cannot taste the jazz wasps”.

The combination of punk and the style of saxophone riffs starts off Time in a very Inner City Unit vein. Even the guitar solo is pure ICU.  The raw vocals harken after Japanese hardcore punk noise mongers like Nightmare. When you inject those you veer into the territory of avant garde experimentalists like John Zorn’s Naked City.

Panning For Gold continues in much the same vein. The evenly spaced drumbeats  at the opening of Problem had me singing “We are the survivors….the eternal survivors”. Fans of ICU or perhaps Hawkwind will get that reference.  But before long it drops down into more of the noisy downtuned d-beat to be expected from the assembled team of protagonists (featuring Bri from Doom and Charlie from Anti-Cimex).

The resolutely anti-work Job is another rocking song that does a great job of melding together the psychedelic, jazzy sax and full on d-Beat attack. It also serves up a reminder of how in a digital age we have become the commodity: “everything’s for sale / and your life is cheap / monetised and tagged”. 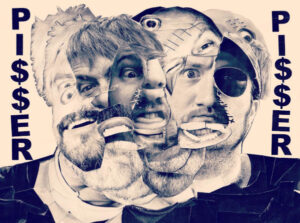 Nazi Rhythm kicks in with the full on Discharge style attack.  The guitar solos and sax make it sound like it’s being beamed from another dimension. But the words are very much from the here and now “No funk for the master race / Ignorant throwback piece of shit / Fuck you and your Nazi rhythm”

Dance In The Light Of Your Burning Bridges starts off more like a bog standard mid paced punk tune. A release of personal anger at religion and failed friendships over 5 minutes. The saxophone has a less chaotic approach, with more of a rocksteady/reggae vibe to it. Adding  phaser driven guitar 2/3 of the way through just cements in my head the space rock and psychedelia influence. Whether Pi$$er are conscious of this, or want to admit it or not, is another matter.

The “difference” that Pi$$er possess has the potential for them to reach out beyond the world of DIY hardcore punk. Imagine you were wandering around a certain type of festival (remember those?).  If you found this lot blasting out from under a tarp draped off the side of an old army truck you’d stick around. You’d be joined by all manner of punks, hippies, psychedelic groovers and ravers.  Just look at the wide appeal of the Cardiacs.

There are only 500 copies of this 12″ Ep available from outlets worldwide and pre-orders start on 1 July so get in quick: