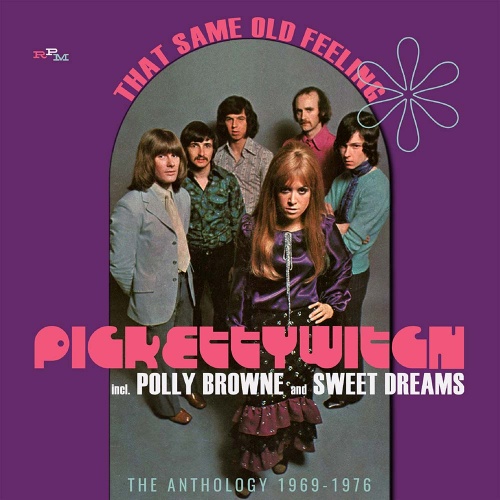 Double CD round-up of sunny 70s band Pickettywitch’s output plus later solo recordings by lead singer Polly Brown and with her post-Witch outfit, Eurovision contenders Sweet Dreams….LTW’s Ian Canty ponders if there is anything intrinsically wrong with being pop lightweights…

Cor the early 1970s look pretty damn drab when you look back on it on film! The brash, vibrant colours of the “Swinging Sixties” had been replaced by sludgy browns and greens in both clothing and interior décor, power cuts, food shortages and discontent on the streets just stopping short of all-out warfare. Plus sinister “Crossroads” character Meg Richardson held a stranglehold on the country’s television viewers! A large amount of jiggery pokery was afoot and that was for certain.

But that’s looking back on it, not experiencing it. As a primary school-aged child living in the middle of nowhere at the time, from my point of view, things didn’t look quite so grim. As long as the sun shone, I could play football on “the green” after school, had enough sweets stuffed with E-numbers to keep me awake for a week and was allowed stay up to watch “The Two Ronnies” and “Match Of The Day” on a Saturday night, I was more or less happy.

And of course there was the Pop Music. A world away from the earnest looking chaps in greatcoats and the Super-groups who I had absolutely no awareness of, the Pop Music seemed like a beacon of hope for the future, of better times to come. Bob And Marcia’s “Young Gifted And Black” and Greyhound’s “Black And White” (which I remember singing at school in music class) were from the light end of Reggae but their simple message of acceptance, harmony and empathy struck a chord with even the very young me. It seemed like times were changing for the better, even though it turns out they weren’t. Even so, more towards the mainstream, the likes of Pickettywitch and the New Seekers turned in sugary sounds to delight teenyboppers with songs as light as gossamer on the wind.

Or so it seemed. Actually though I have a vague memory of the name Pickettywitch (thus titled after a pub in the West Country apparently) and that they were a (mainly) female vocally-led combo, the rest has been left somewhat hazy by the passage of time. I kind of remember the doe-eyed and attractive Polly Brown (sometimes Browne) being the band’s focal, as well as vocal, point and she vied with Lyn Paul of the New Seekers in “the kind of girl my mum would want me to marry when I grew up” stakes (mind you after many years I saw a photo of Lyn recently and she definitely had an impish, cheeky twinkle in her eye – my mum definitely didn’t spot that when considering potential daughter-in-law material!).

Initially worried that this new anthology would be a little too saccharin for my tastes all these years on, I approached this 2CD collection as a time capsule from my extreme youth. Which was admittedly a silly way of looking at things, but really I need not have been afraid – Polly Brown actually had a strong, distinctive voice and the band was schooled in Soul Music, ok not anything would set people back-flipping crazy at a Wigan all-night shebang, but definitely showing the mark of Motown on most of the tracks here. Starting out at the tail end of the 60s, they appeared on “Opportunity Knocks” starring the Simon Cowell of the 70s Hughie Green, but soon established themselves as a chart force.

They could do that kind of expansive, silky smooth MOR as well (the sad “This Day”) and jaunty old fashioned pop (mostly the ones with the male vocals of Chris Warren which sometimes are a little too “for the very first time in cabaret” if you catch my drift) but even the big hit, the lovely “Same Old Feeling” goes back to their tried and trusted 60s Soul roots somewhat. “Maybe We’ve Been Loving Too Long” makes absolutely no sense but is a bright and breezy piece of late-arriving 60s beat with a little bit of “Double Barrel” buried deep inside and “The Power And The Glory” (not a Rejects or Eddie And The Hot Rods cover!) nails together gentle fuzz, country and spooky vocals all into the mix!

Yes they were lightweight but isn’t there are point when that becomes a virtue rather than a criticism? Lightness of touch is surely a good thing in Pop Music and Pickettywitch might have been many things but heavy handed they were not. After all they would have looked silly as a pop outfit trying to be all weighty and tough (like “War Is Naughty” or whatever that Culture Club song was). They were just a very decent bubblegum pop outfit that made records to lift the heart, pure and simple. Although there are a couple of ballads that don’t go anywhere on balance this is a highly enjoyable disc.

But Pickettywitch is only half the story here, with the second disc given over to Polly’s solo adventures and her next band Sweet Dreams which was basically a duo of her with ex-Skatalite Tony Jackson. The ‘Witch were seeming past their sell by date as 1972 ticked round, so Polly jumped ship. Her self-titled debut album which emerged the following year was in a similar mode to her previous band, but more so. Soul stompers like “The Feeling’s Right” and R ‘n’ B flecked semi-ballads (her cover of the Bee Gees “To Love Somebody” and “Wear It On Your Face” are both excellent) battled it out with the more easy listening material like “The Composer”. “Wild Night” could have been a Mod dancefloor filler 10 or so years previous (or even today), with nice fuzz guitar and horns. She had a more than decent enough voice to carry all the material here, there is a lack of a really “killer” hit and it was no surprise that her best known single (well it stopped just short of the top 40 anyway) “Up In A Puff Of Smoke” isn’t featured here. All things considered though, this is an engaging and occasionally very diverting LP. There seems to be some effort towards “maturity” which marks the difference between her previous work, but after this record she would throw herself again at the pop jugular with her new vehicle, Sweet Dreams.

This new band hit big with a song entitled “Honey, Honey”, by the then pretty unknown song-writing team of Andersson and Ulvaeus, otherwise known as the hairier end of Abba. This record made the Top 10 in the UK, “aided” by a bizarre appearance on “Top Of The Pops” with Brown, for reasons best know to herself, in blackface. Jackson’s baritone upped the Soul ante and contrasted well against Brown’s more honeyed tones. On “Lonely Days, Lonely Nights” they work ever so well together and there’s more than a touch of Philly in there, which is meant as a compliment. Being a logical progression from Pickettywitch meant that instead of 60s Soul, the 70s lush version bordering on Disco was the template for Sweet Dreams. “Honey, Honey” is all action, though for some reason they used producer Ron Roker’s voice rather than the more than capable work of Jackson, but even so they managed to beat Abba at their own game with this relentless stomper. Ultimately Sweet Dreams dealt high-quality, lush and agreeable Disco/Dance music (though occasionally a bit undemanding it has to be said).

Ironically Brown and Jackson could have spared us the trite offerings of Brotherhood of Man’s reign of chart terror, as they were pitched in against them for the same year’s “Song For Europe” competition. The record (again not featured) “Love Kiss and Run”, was pretty much Sweet Dreams “last call” and within the year they had gone their separate ways with Polly still singing Blues to this day. The seven year period documented here was a strange period for Pop Music, record companies aiming their product for almost the first time outside of the standard teenager age group/target market to everyone from the very young to Grandparents. Pickettywitch could only really have existed in this time, but there was a verve and energy to their craft that makes today’s “X Factor” style no-marks seem even crasser. Brown’s solo work and the Disco/Soul work of Sweet Dreams both add to the fun on offer. It is all disposable, lightweight but also loveable and sweet – perhaps the early 70s actually weren’t that bad after all?