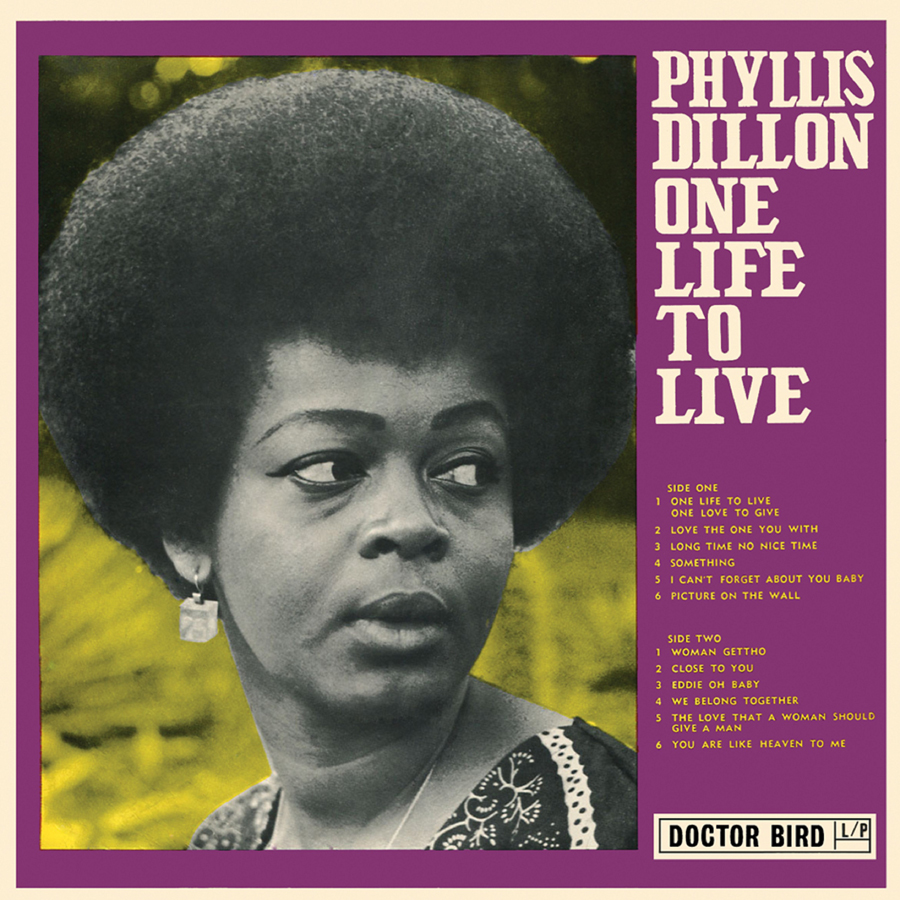 One Life To Live: Expanded Edition 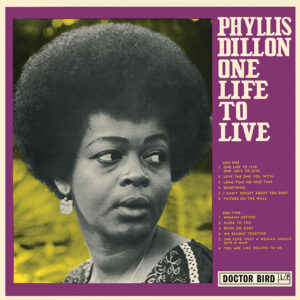 Reissue of the “Rocksteady Queen” Dillon’s only long player, with the best of her other recordings for Duke Reid’s Treasure Isle label featuring among the 16 bonus tracks….Ian Canty relates the story of a hugely popular artist in her home country, who suddenly quit after this album saw the light of day……

Arriving in 1966 on the burgeoning Kingston music scene, Phyllis Dillon was still a teenager when she cut her first single, but her timing was perfect. She had just the kind of crystal clear, cool voice that worked perfectly with the slower beat of Rocksteady that was emerging and in Duke Reid she had a producer totally sympathetic to what she wanted to do. She quickly became his premier female artist and they set off on a run of successes that would last a good few years and see her stake a credible claim to being the Queen Of Rocksteady.

Frustrated by the lack of financial return for her hard work, in the late 60s Dillon moved with her family to New York for a new career in the banking industry, but she kept her recording career going with frequent trips back to Jamaica to record and play live. This limited her output somewhat, but meant she remained loyal to the Duke and only high quality offerings were set down on tape, including a fine 1970 duet with Alton Ellis Remember That Sunday. The King and Queen of Rocksteady certainly knew how to cut a soulful piece of Reggae.

The Jamaican music market at the time was almost wholly driven by singles, created for the dances that dominated the scene. Many hugely popular artists went years before they got around to releasing a LP. Phyllis was among their number. It had to be conceded, when the rhythm speeded up again with Reggae, she wasn’t quite as at home as during the Rocksteady era. Also, though undoubtedly a sublime vocal talent, Dillon only made limited impact outside of her home market. All of which also may have gone some way to it being six years on from her debut recording Don’t Stay Away (self-composed and quite wonderful with that trademark voice in full effect, included here as a bonus track) before she finally made it to the album racks.

One Life To Live only features one self-penned track (up-tempo album closer You Are Like Heaven To Me), which is a pity as she had already proved her abilities in that area to be good enough. Having said that, the quality of the material used is not in doubt and the playing and production are first rate. 1972 was an odd time for Reggae, the boom years of 69/70 were long gone and the more underground-slanted Roots and Dub sound were beginning to take over. More commercial inclined artists like Dillon veered much more towards the Pop market and on the whole the album employs a much lighter touch than a couple of years previously.

This was not a problem for Phyllis as she could croon Soul with the best of them, but for me the highlight of the album is when she is really allowed to cut loose on her mighty good and tough version of Woman Of The Ghetto. The takes of Close To You by the Carpenters and the Fabs’ Something are pretty near to the middle of the road, being very easy listening for most part, not bad in any way but not vital. Her version of Eric Donaldson’s classic Cherry Oh Baby (retitled by Phyllis Eddie Oh Baby) is a treat for anyone not already sick of the song through the UB40 cover and We Belong Together is lovely, an assertive vocal over a cool Reggae backing. Unusually for JA albums of the time One Life To Live is made up of new recordings, not older tracks (many of the LP’s contemporaries were mainly made up of old single tracks). The one exception is Long Time aka Nice Time, a catchy 1967 effort enlivened by a tinge of calypso.

Although the album itself is a acceptable enough effort given the timeframe, perhaps Dillon was better heard on the single tracks, which are on the whole more immediate and not too smooth. She makes the much-covered oldie Perfida her own, riding the beat perfectly and her “sock it to me baby” is nonchalantly sexy. Though her aforementioned duet with Alton Ellis was great, her collaboration with Hopeton Lewis Get On the Right Track is no slouch either. It’s Rocking Time aka Rock Steady is another highlight, simply a great dance record and Boys And Girls Reggae uses Jamaican children’s game song Brown Girl In The Ring (famously covered by Boney M) as the basis for a rocking bit of Reggae fun. Even when she had something corny to sing like the risible Don’t Touch Me Tomato, that voice could turn it to gold.

Eventually tiring of commuting between New York and Kingston, Dillon opted to retire from music soon after One Life To Live was released. Apart from the occasional live gig, there was nothing to report until 1991 when she accepted an offer to play at a Jamaican hotel called the Oceania (after originally rebuffing, still bitter at the lack of remuneration for her efforts back in the 60s and 70s). This was a door back into music for Phyllis and she played live until she passed away in 2004, though she unfortunately did not record further. A real shame because that voice had so much to offer.

Though not her entire discography, this new expanded edition of One Life To Live gives us a fine overview of Phyllis Dillon’s best work. I doubt whether many could beat her in the field of cool, classy, but still hip-swinging Reggae love songs. Phyllis had a beautiful and distinctive voice and the match with Duke Reid’s musicians and production technique was perfect. Together they mined plenty of gold in the scant few years Dillon recorded. The discerning Reggae fan, or indeed anyone who enjoys a good tune well sung and played, will find lots to love here.