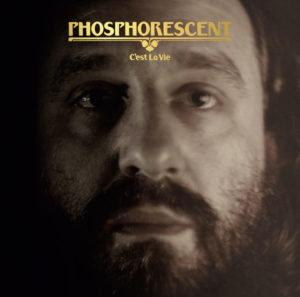 Phosphorescent’s seventh album, following a five-year hiatus filled with drastic life changes, brings a sonic twist to the country-rock roots of Americana, filled with songs of strength and survival. Tim Cooper falls under its spell.

Matthew Houck gazes balefully out of the cover photograph of his seventh album as Phosphorescent, his blank expression wordlessly reflecting the resilient shrug of its title. On its nine songs he is, if not exactly happy, then certainly in a better place than he once was. This is his first record in five years, a dramatc period in which he ended one relationship and began another (with bandmate Jo Schornikow), left New York for Nashville, became a father – twice – and built a studio by hand. Somewhere along the line he nearly died of meningitis. So he knows a thing or two about resilience.

A musician who has traded in Americana-flavoured heartache and loss for most of his career, as evidenced on older albums like Here’s To Taking It Easy and the almost-a-breakthrough 2013 album Muchacho, here he exudes a spirit of strength and survival. That’s not to say he’s lost his USP: Houck’s warm, world-weary voice, constantly on the brink of breaking, and gift for plaintive melodies drenched in the mournful sound of pedal steel guitar remain refreshingly intact.

These new songs,  coloured by an electronic palette that bathes the more conventional country flavours in ambient textures, ghostly whoops and celestial harmonies – often with his double-tracked self – reflect on the world he has left behind and the place in which he now finds himself. It’s a mixture of the earthy and the wondrous, the troubled and the serene; his lyrical focus the balance between the then and the now and the future. If it sounds existential, well that’s what happens when you flirt with death; amplified by the emotional rollercoaster of parenthood. 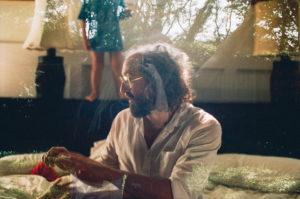 The gently pulsing C’est La Vie No.2, sung in that yearning voice that wraps you in its warm embrace, sums up his transformation: “I wrote all night / Like the fire of my words / Could burn a hole up to heaven / I don’t write all night burnin’ holes / Up to heaven no more” while There From Here (“If you’d have seen me last year I’d have said / ‘I can’t even see you there from here’”) and These Rocks (”I was drunk for a decade / Been thinking of putting that stuff away”) reflect more directly on the darkness from which he has emerged, while acknowledging that they will forever define him: “These rocks / They are heavy / Been carrying them around all my days… Guess I wouldn’t have it any other way.”

Elsewhere, New Birth In New England is an uncharacteristically jaunty, playful tale of an encounter in a bar that sounds like Paul Simon, both in its light-hearted narrative and its calypso-tinged melody, while Christmas Down Under is a slow country ballad sung in harmony with his own vocodered voice, somehow combining the experience of swimming on a beach in Australia with musing on whether or not Jesus had a daughter. It also boasts Houck’s best, if not biggest, guitar solo since the wondrous Los Angeles almost a decade ago.

At other times he’s more straightforward: There From Here celebrates rural life in Tennessee, the joy of spotting a fawn on the lawn at dawn (I know… call the rhyming police!), while My Beautiful Boy is a wondrously innocent love song to his newborn son that somehow avoids being as sentimental as that sounds. The standout tune, though, is Around The Horn, eight minutes of motorik psych-country soundtracked by swirling guitars and double-tracked vocals that sounds as if Kraftwerk had written Autobahn after a cross-country road trip along Route 66 with Spiritualized on the stereo.

The album is bookended by two instrumentals: Black Moon / Silver Waves, a slight hors d’ouvre for the main course, and Black Waves/ Silver Moon, a rumbling, galloping instrumental theme for an as-yet-unmade Western, with  aghostly falsetto and distant echoes of pedal steel, the musicians metaphorically riding into the sunset. Reflecting on the life changes that inspired these songs, Houck says: “These significant moments in life can really make you feel your insignificance. It’s a paradox I guess, that these wildly profound events simultaneously highlight that maybe none of this matters at all…

“This process is positively filled with moments where you go ‘What exactly the hell is it that I’m doing here?’ – and the answer always comes back a resounding, ‘I don’t know.’”