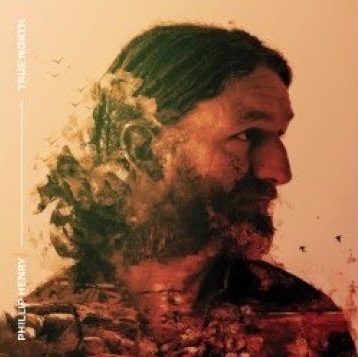 “Ten years of travels with a slide guitar” gives a clue for anyone wondering what to expect from the slide guitar, harp toting, beat boxing half of Edgelarks.

Ask anyone who knows Edgelarks (the artists formerly known as Phillip Henry & Hannah Martin) what they’d expect from a Phillip Henry solo album and they’d probably give a confident answer. His musical prowess has graced not only their growing catalogue but also those who’ve been in need for something a little rootsy and edgier on their palette, not least the recent Band Of Love (folkies go disco…or is it vice versa?). Anyhow.

The first impression of listening to True North is that it does feel slightly unusual to hear himPhillip Henry  without the musical and vocal presence of Hannah Martin. On the other hand, True North is an intimate insight into the psyche of Philip Henry.  It’s one that  packs in one heck of  a journey that travels from Chorley to Devon via India, Japan, South Africa and the USA to Australia. In fact it’s a worldly road well-travelled and the influences are diverse and numerous.  No wonder that the accompanying press release runs to six pages to fit in all the detail of the origins and inspirations of the music and dazzles, as does the music, with the plethora of obscure instruments.

What True North is though, is a rite of passage; a record of the Henry pilgrimage to dedicate himself to exploring the many facets and capabilities of his instruments. It’s also a genuine solo album whose branches reach out to all those tunesmiths and musicians from the classic blues of Blind Willie Johnson to the contemporary work of Tim Edey, whose own works go someway to inspiring Henry himself.

He zig zags his way  through the record until he comes full circle with two reworkings of pieces originally written ten years ago ahead of his trip to India.  “Tunes of thankfulness” he calls them and while True North brings down the curtain on an ‘interesting’ ten years, there’s the promise of looking forward to where the next ten lead.

Watch a trailer  for the album  here: