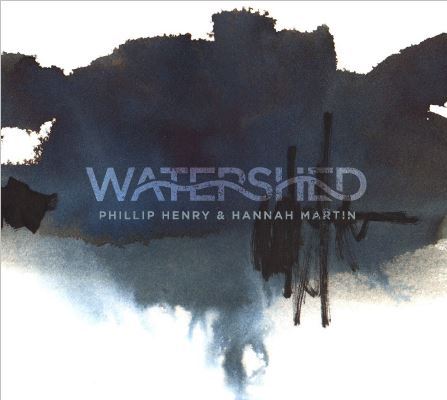 Their first album since their ‘Best Duo’ award at the BBC Folk Awards so no undue pressure naturally, yet Phil Henry & Hannah Martin seem to have taken the acclaim in their stride. Not only do they  seem to be hitting the spot,  recognised by well-respected folk commentators and broadcasters to the national press, but also remain a grounded and genuinely unpretentious pair.

Their new collection of 12 original songs and tunes saw the Henry/Martin partnership recording pretty much live with the Watershed band over a period of  just ten days in the borderlands of the Blackdown Hills – essentially a journey taking them close to home, the material ultimately inspired by kith and kin. The duo openly state that each song was written with a specific person or persons in mind – hopefully with enough for the protagonists to recognise who they are – bar the title track which opens the album (“written for all of you”).

Joining them on the album are  Matt Downer on double bass, James Taylor on drums and percussion, with a couple of appearances from Rex Preston  with his distinctive mandolin. However, as a duo, it’s the range of  instruments that Henry & Martin carry  that give them the freedom  to  decorate their soundscapes with the original and the unusual.  From Hannah’s fiddle, banjo  and five string violin to Phil on various guitars including his trademark dobro and lap steel and of course harmonica where his virtuosity is becoming legendary as well as in demand, they combine to present a totally distinctive sound .

Each song a tale in itself, a vignette or a snapshot of life or a moment in time. Opening with the title track, which  reinforces the values and the philosophy of living in the here and the now and  the choices of which paths to take, it sits within  the analogy of the duo walking the Cumbrian fells. Henry’s harmonica gets a first real workout on ‘Tonight’ , before  ‘Conkers’ and ‘Yarrow Mill’ slow things down, dipping into the past with   memories alluding to bygone days with which many will empathise; the latter accompanied by flowing fiddle and a  subtle hint of shuffling percussion, while ‘Conkers’ finds itself accompanied by the characteristic dobro and banjo combo/ Henry & Martin sound.

It may be that ‘Foundling’ becomes viewed as  the centrepiece of the album. An account of the duo’s own family history with the dobro again making an understated accompaniment to Hannah’s vocal performance of the set in relaying the narrative. Amongst a set of emotive pieces, it starts to emerge as the most effectively  realised, the lyrical  sentiment and musical mood matched perfectly.

With  ‘Stones’  folk music takes up a political commentary – UKIP takes a subtle bashing over single sex marriage issues and as far as tunes go, they add  ‘December’ and the traditional ‘Lament’ before the  pairing of  ‘London and ‘Taxis’ sign off on a contemporary note,  ‘London’s haunting coda merging into a tale of their never-ending nomadic journeying musicians life celebrated in the lyric “here’s to the road”/”some towns I forget,  some towns I remember”

Dissecting the album almost song by song may not be the most effective way to pass judgement, yet  the detail which is unravelled in each piece almost requires a thorough scrutiny – time may reveal more intricacies and nuances musically and lyrically but it seems that despite the speed with which the album was recorded, the quality of the songs and the performances is quite remarkable.  On the other hand, the album stands as a whole, a concept even with the common thread winding its way through the songs.  If truth be told, the surroundings of the peaceful and secluded landscape on the Devon and Somerset border with its ridges, valleys and springs,  farms, villages and ancient features  creates  a perfect analogy  for the album. Airy and atmospheric , at times stark, at times deeply personal, yet alive with warmth and passion and observed beautifully.

We appear to be at a time and place when  many artists in the folk field are  significantly stepping up to the plate and producing work which is ground breaking and original. At the forefront are Phillip Henry and Hannah Martin, flying the flag and proudly leading  the journey, shifting the genre into another dimension.

Words by Mike Ainscoe. You can find more of Mike’s writing and photography on Louder Than War at his author’s archive and his website is www.michaelainscoephotography.co.uk.