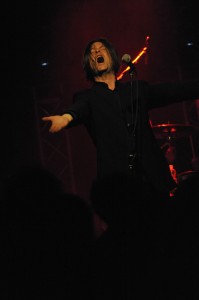 Plying a dark melancholic pop music, Phillip Boa has spent the past three decades shape shifting in the interzone between the underground and the German mainstream.

Somehow his dark melancholic songs of uncertainty and alienation and lost love,  longing and gothic romance have dealt in the weighty and become intwined with the top ten of the European heartland.

Never as dangerous as fellow post war, post punk German fellow travellers Einsturzende Neubauten, Phillip Boa’s music is the other side of the same coin and still packs the same intellectual darkness and flirtation with the night and the whiff of misanthropic romance as Blixa Bargeld’s brilliant outfit but is couched with a tunefulness.

If Neubauten’s genius is to tear the fabric apart and create a whole new sound from the fabric of the post war waste of collapsing new Berlin, Boa’s equally brilliant trick was to create a pop music from his intellectual darkness whilst living in the forgotten German heartland of post industrial Dortmund, a city where dreams and imagination had to be the currency instead of the luxury of decadence and danger in the then fallen capital.

The brooding and dark melancholia of Phillip Boa has been with us for some decades now and time has not withered his approach. In the mid eighties he was the mainstream thrust of the German underground, the one that got away, the brooding presence who somehow got in the top twenty with his quirk pop of voodoo drums and that classic vocal interplay between his deadpan voice and Pia Lund’s high pitched, bubble gum, classic girl vocal.

He could also write a killer hook and this new pop landscape has become influential and much loved in his home country with an unlikely raft of emerging musicians at the time giving him a nod, like Rammstein, who were so enthralled with his dark sense of adventure that they asked him to produce their first single which he turned down in the belief that their demo was already perfect enough.

It was this spirit of belief in the creativity of others that saw him support a whole raft of British underground outfits like my own band the Membranes who he tirelessly promoted in the German scene for the decade in the eighties. You can hear echoes of the desperation and artistic madness of that death to trad rock UK scene in Boa’s music. It lurks in the background but like some kind of German version of Bowie putting his arm around deranged lunatics like Iggy Pop he was smart enough to turn this music into a new kind of pop and became a German Morrissey type figure- the social consciousness and lonely voice in a rampant mainstream that was turning revolution into money and pop into a supermarket instead of an art form.

Tonight Boa plays for nearly two hours- it’s a mixture of his new album Bleach House- an album that sees him return to the adventure of his early years whilst conversely becoming his highest charting release for decades and a greatest hits set. It’s a historical narrative of one man’s career and the audience are enthralled with his music and the world it creates and sing along hanging onto every word whilst he stands there tall and charismatically awkward basking in the glow of this new found reaffirmation of his art and performing his biggest Berlin show for decades.

His new foil is Pris who has replaced Pia Lund and her voice sound strong and she has a charismatic presence on stage – a darker and more brooding heroine than the long departed Pia and her Amazonian and powerful stage presence gives the band a different twist as Boa intones his songs of love and fury and is the man who still is falling to earth in the city that crated a new Bowie and its somehow fitting that the band are at a triumphant best and have revived their fortunes just when the mainstream could do with some of the devilish intoxication of darkness.