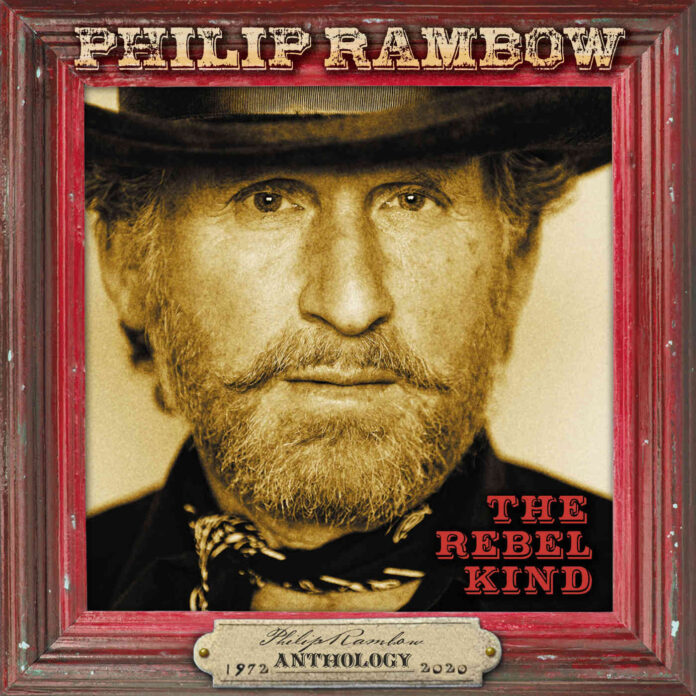 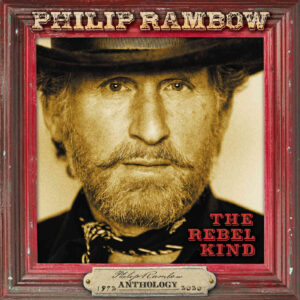 Round-up of the solo output of ex-Winkies singer Phil Rambow, with his three albums Shooting Gallery, Jungle Law and Whatever Happened To… plus many bonus tracks, including four demos cut with Mick Ronson and the first take of There’s A Guy Works Down The Chip Shop Swears He’s Elvis, sung by Kirsty MacColl. LTW’s Ian Canty looks at the work of a man who, by his own admission, was nearly famous twice….

Montreal native Philip Rambow first acquired a dose of notoriety via his unusual London-based pub/glam outfit the Winkies, once named by a certain Billy Idol as the first punk band. But he first recorded on his own back in 1972 under the tutelage of Jack Schectman in Toronto and Song Untitled from that session appears as a bonus track on the first disc of this compilation. The cheeky title, soulful voice and well-judged folk rock setting provided a glimpse of a developing talent to be reckoned with.

The next year Rambow began his adventures with the Winkies. Offering something a bit more spicy to the usual pub rock fare, their different attitude impressed one Brian Eno, who had just left Roxy Music. He enlisted them as his backing band for a John Peel session and an ill-fated tour that lasted a mere six dates. Even so, this thrust the Winkies into the public eye and Chrysalis snapped the band up. After junking some sessions with Leo Lyons behind the desk, they completed their self-titled LP with Guy Stevens producing. Unfortunately it failed to make an impact beyond the risqué “banana hammock” sleeve photo and they disbanded soon after the record’s release.

Chrysalis had enough faith in Rambow to retain him as a solo artist and his debut solo single, the tough street rock with steel drums(!) of Dem Eyes, showed he knew which way the wind was blowing in late 1975 at least. After Chris Wright, the label’s boss, had reportedly called Rambow a genius, the imprint cooled their interest a touch when the single failed to scale the charts. Spending a short while with a new band that included Blair Cunningham (later of Haircut 100), he then moved temporarily to the US. There he played legendary venues CBGBs and Max’s (even featuring on the second album taped at the latter club with Night Out, also covered by Ellen Foley on her debut LP), slowly making a name for himself until Chrysalis summoned him back to London as punk hit big.

A band was put together featuring the great Mick Ronson and demos were made with Chris Thomas and Bill Price producing. Four of the tracks set down are present as bonus tracks here and they’re pure gold, worth the price of admission alone. There is a bit of a sense that Mick was less than fully committed to the project, only wholeheartedly contributing to Fallen. His on-going partnership with Ian Hunter in the end curtailed things pretty quickly, which was a crying shame. What we have here is a perfect meshing of the skills of the performers given awesome power and precision by the production. Great songs, great playing and exciting performances, with Fallen and Cheap Shot being particularly fine. But somehow Chrysalis came to the peculiar decision that the tape was “just thrash” and rejected it outright – cloth ears in A&R bringing the curtain down on something special. An album penned by Rambow with Ronson onboard would surely have been a delight.

Undaunted Phil dusted himself off and threw himself into the capital’s jumping live circuit. He contributed Underground Romance (a bonus track on CD two) to the Hope And Anchor Front Row Festival LP, which on top of a burgeoning reputation as a live act alerted EMI to his abilities. In 1979 he cut his first album for the label Shooting Gallery. A record of depth and abundant appeal, it again failed, possibly due to a lack of promotion. It appears that a change in EMI’s hierarchy resulted in Rambow plummeting down its list of priorities and the LP slipping out almost unnoticed as a result.

Mad again really, because if anything had a shot of thriving when exposed to the many fans of Elvis Costello and Graham Parker at the time, it was the finely judged power, variety and song-writing smarts of Shooting Gallery. If the re-recordings of Fallen (issued as a single) and Young Lust don’t quite match the Ronson band’s efforts, they’re still full of riffy goodness ripe for the new wave crowd. Even better is Don’t Call Me Tonto, a no-holds-barred tough driving number with a clever, hard-bitten lyric that underlined Phil’s never say die attitude. The Rebel Kind, also a single, was a wonderful soul pop/glam slam concoction that certainly had chart potential. But all the way through this is a quality record, from the high energy salvo of Strange Destinies to the mean and moody set closer Deep River.

Again Rambow was faced with a set of perfectly fine offerings not connecting with the listening public. Another bonus track on one disc one does point to a future line of success – the first demo of There’s A Guy Works Down Chip Shop Swears He’s Elvis, cut with Kirsty MacColl and a sparse backing from Phil on guitar and vocals, plus a rhythm machine. This record would kickstart Kirsty’s chart career and provide a decent side-line for Phil in providing songs for others. As the new decade dawned, EMI kept some faith in him though and two years after his debut a second album for the imprint Jungle Law arrived in 1981. Written in the aftermath of a romantic break-up, the LP is full of bittersweet observations, but he never overdoes things to the extent it stops the songs being involving and the melodies captivating.

If one thing stood in the way of Jungle Law’s success apart from EMI’s customary indifference to promoting Phil’s work, it could have been the changing face of pop music by 1981. Gamely there are attempts at modernising the sound, with the title track utilising a galloping beat and some electronic keyboards well and the gleaming synths on the otherwise Graham Parker/Phil Spector pop of Bike Boys. One sensed though that Rambow was a touch happier on more rock-flavoured efforts like the excellent Snakes And Ladders, an “end-of-gig/scarves-in-the-air” red-hot rocker in the Faces/Mott mode and the anthemic Don’t Come (Cryin’ To Me). Overall this was another strong selection that didn’t make any headway through no fault of the artist and his backing band.

Though the album was another goodie, the bonus tracks here don’t quite live up to the excellent ones featured on disc one. The four efforts that were recorded by soundtrack king Hans Zimmer plod due to the 80s production ticks, though Smokehouse Bay is an interesting electropop crossover. Rambow’s latest backing outfit the Debonairs’ boogie unexceptionally on Ain’t No Fun To Me, but an unsuccessful attempt to follow Auf Widersehen Pet’s Jimmy Nail into the charts with fellow cast member Gary Holton is a lot more fun. Glen Matlock and James Stevenson combine with Phil to provide the ex-Heavy Metal Kid with a good tune in Big Tears and a sound much in the style of Iggy’s hit Real Wild Child. We also get the live Underground Romance from the Hope comp, which is of course blooming good and Ellen Foley’s cover of Night Out.

In between Jungle Law and 2014’s Whatever Happened To Phil Rambow a lot of time passed. In the interim Phil worked in A&R, ironically enough given his record label troubles, amongst other short term ventures. An invitation to appear at 2013’s RonsonFest, in tribute to his old mucker Mick, got him back into performing and after a stint supporting Bowie tribute act Holy Holy he finally got round to cutting a new album. Given the thirty years plus that had elapsed it is no surprise that Whatever Happened To… is a completely different kettle of fish than the other two LPs in this set. The nods towards country and folk that permeated Shooting Gallery and Jungle Law are far more pronounced here, but one could not deny Rambow still had a real talent for a winning couplet coupled with an appealing musical vision.

The goodtime, horn-driven of Not Broken, a smart song of defiance, welcomes us in and shows that whilst Phil may be toting a lighter sound, he’s still got a tonne of passion and soul. Call Me Anytime is a sharp look back to the new wave days sound-wise and Nothing Is Sacred a pure jolt of rock & roll goodness. The slow-burning one-two of Once We Were Young and Perfect Storm bring the LP to an atmospheric, satisfying close.

The bonuses here echo the themes of the album, with the cool jazzy Alligator and a choral setting for The Writing’s On The Wall shining. Finally and bringing things right up to date we have two tracks from Rambow’s new LP Canadiana, including the fine Oceans Apart single, which benefits greatly from a lovely vocal performance by Sharlene Hector.

Phil Rambow remains an excellent songwriter, a talented performer that always provided something interesting for any audience that were prepared to listen. Unfortunately for the most part, this audience numbered relatively few, nowhere near enough to put him in reach of the success that he deserved (but only really received when writing for other people). Never fear, because you can still become part of this select group by taking time to acquaint yourself with The Rebel Kind, where his soulful voice, unstoppable ebullience and eminently cool wordplay are given ample opportunity to beguile the adventurous listener. A top quality set which has the added advantage of giving a view of an artist that still has something to offer today.