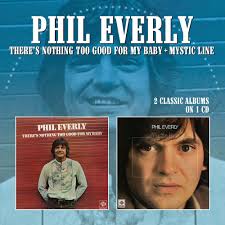 There’s Nothing Too Good For My Baby – Mystic Line

Our man Phil certainly was on a roll after splitting from his brother Don in 1973. After releasing the excellent “Star Spangled Springer” in 1973 (that contains an excellent version of Albert Hammond’s “The Air That I Breathe”), Phil signed a three album deal with Pye Records  and set sail for  the UK to record “There’s Nothing Too Good For My Baby” (re-titled “Phil’s Diner in the US).

If Phil’s debut was a rather sober affair where his country roots remained firmly on display, here we are sailing close to easy listening and its on songs like “Caroline” and the ragtime of the title track that the record hits is strides. On rockier tracks like “Invisible Man” (marred by over the top guitars) or the weird reggae of “We’re Running Out”, Phil sounds a bit lost trying to buck musical trends. The album died a death on both sides of the Atlantic which means a new approach was undertaken for its follow up “Mystic Line” which was recorded again under the supervision of Terry Slater with Warren Zevon arranging (he was already involved in “There’s Nothing Too Good For My Baby”). Benefiting from a considerably stronger set of songs and a rootsier production, it is a resounding success (apart from another reggae faux pas titled “When Will I Be Loved”). Opening with the excellent “Patiently” and its groovy bass riff and Phil’s soothing voice, the album then moves to a slightly underwhelming rocker titled “The Lion and The Lamb” but things pick up again on the spacey title track. The ballad “Word In Your Eyes” is a perfect vehicle for Phil’s voice and “Better Than Now” is an excellent pop song with a highly memorable chorus. Phil tries again his hand successfully at a ragtime number with “Back When The Bands played in Ragtime” while the sparse “Friends” closes off the record perfectly (with a bonus track titled “Baby You Know Me” tucked at the end).

Unfortunately “Mystic Line” bombed too and Phil decided to call it a day on his collaboration with Pye. Not a set of perfect albums but there’s still plenty of good songs to be discovered on them.