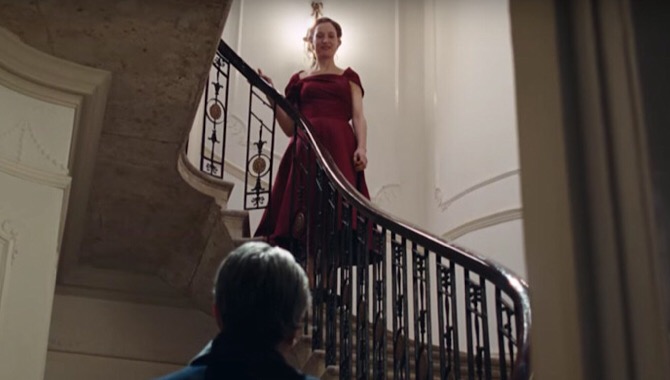 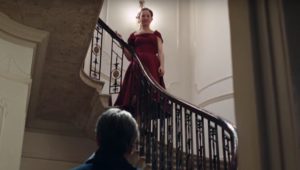 Knowing almost nothing of the way ahead, I fumbled for the thread in Paul Thomas Anderson’s labyrinth.  True to the old myth, a sudden infatuation heralded the start of this journey into the subterranea of the heart although the exchange was less than obvious.  Ariadne gave Theseus the thread so as to find his way back out of the labyrinth after defeating the Minotaur in return for marriage to a ‘plain girl’ and the promise of escape from dreary Crete.  In Phantom Thread, the intrigue that motivates us to keep following the thread is not the prospect of emancipation, but the desire to know the true nature of the exchange between Woodcock (Daniel Day Lewis) and Alma (Vicky Krieps).

Phantoms, ghosts, invisible forces capable of wreaking havoc in the material world haunt every sumptuous scene of this film.  Absences, lacunae, the unexplained, the unsaid, the barely felt, the hinted and the long-departed stalk its spiral stairways.  Suggestions and suspicions are sewn into its celluloid, encoded in its digital DNA.  There are scenes you don’t remember, scenes you thought you could afford to forget.  There are scenes that return when you close your eyes, when you try to put the world behind you.

In this labyrinth we move from coastal cafe to chateau to town house, from dining room to scullery to bedroom to en suite bathroom, spiralling, spiralling, spiralling stairways, winding and winding and winding the thread.  Phantom brides and phantom lives.  Restless, exhausted, weary from the constant movement from chateau to town house, chateau to town house, horrified by the claustrophobia of dining room to bedroom to en suite bathroom, invisible desires, invisible desire paths intangible upon the 30’s floor tiles, below the dado rails and the picture rails and the coving and the telephone box perched up on the wall, the receiver slumped over its cradle, waiting for the post-war world to make it ring.  Waiting.  Waiting.  The endless days.  Restless ghosts from room to room.  Beneath the eaves in the studio in the roof of that chateau in the forest, wrapped in trees, ensconced in the opacity of evergreen turreted life.

In this labyrinth that’s what it’s like.  Step by step for a thousand miles, but each passageway wrapped tight back on the last, the illusion of movement and the lives you could have lived, lives upon lives.  Days go by without sunset or sunrise and yet you are only in the room next door.  The thread is frayed.

Alma is here in the labyrinth by your side, in a way that Ariadne never was.  Woodcock is fumbling now, frantic in the darkness, ahead of you, you feel him snap, the thread is taught, he does not confront the beast, he becomes the beast, his horns sharp against the confines of these narrow passageways, these spiral stairs, these convolutions of his brain, of yours, of your conjugal mind.

Alma haunts her own life, a ghost moving from chateau to town house, from dining room to scullery to bedroom to en suite bathroom, she glides without friction, observing, reserved, watching her own epitaph slowly chiselled onto her tombstone.  Cyril (Lesley Mandeville) watches too.  They co-exist.  At a distance.  Gradually, imperceptibly, they enter each others’s orbit, lock into place, gain traction, warp space, arrest the direction of travel, effect change once again in the material world.  Never anything less than implacable.  These spirits dip into the real, conspire to emancipate themselves from the beast whilst remaining labyrinthine.

At the fulcrum of change we view the decisive moment of the film from the perspective of the bottom of a simmering stove-top pan, through the magic of a fungal sheen.  Emancipation can be gained through many forms.  Physically, we may be trapped in this labyrinth forever with its gluttony of aristocratic domesticity, but there are other ways to escape the maze and defeat the beast, when the way is lost and the blade is blunt.

Haunted by the ghost of Empire, by the wounded, lingering spectre of British reserve, by the displaced, the disoriented, the Pyrrhic victors, the wandering, the wondering where when my life can begin.  What is that accent?  What is that place, which year?  You think you know, but then you question it.  You think you know but you don’t.  You never do.  You grasp at the threads.

Watch the trailer for the film on YouTube here.