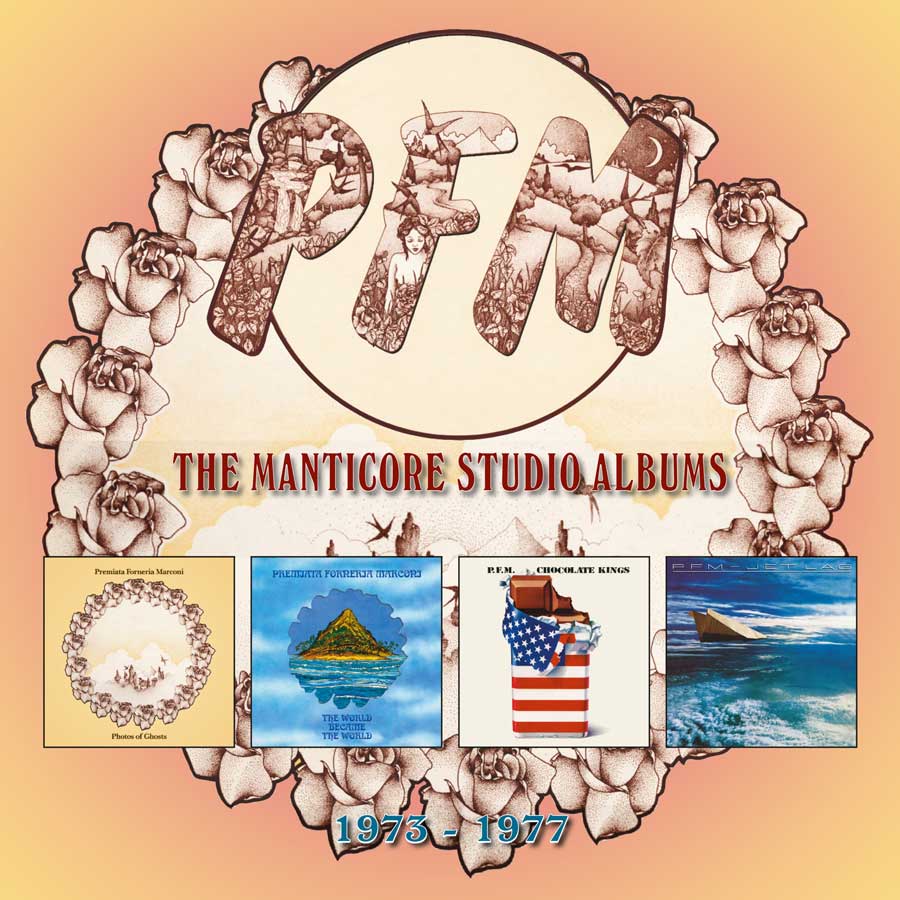 No doubt that the Italians love their prog rock. They were the nation who saw the light and embraced the fledgling Genesis in the early Seventies, in turn  whose innovative work opened the floodgates although strangely few native bands took up arms. Signed to ELP’s Manticore label, Premiata  Forneria  Marconi, which I never managed to master in thirty plus years  of prog rocking after they also began to answer to the much easier to cope with PFM, were one band who managed to be welcomed  into the fold. To this day they’re  still delighting with their grand romantic visions, led by  the one constant of singer Franz Di Cioccio who’s guided PFM from 1970 through to present day, or at least last year’s Emotional Tattoos album.

However, back in the seventies, they were an original and most welcome alternative to the masses of British trendsetters. The Manticore studio albums, which  have been re-presented in a lovely little package, might be familiar to many, yet for some a box of delights beckons. In a vague attempt to do something different in reassessing these albums, we’ll have a go at ranking the four albums theta represent  a particularly prolific period for the Italians as well as the prog genre in general. So, in reverse  order:

Hardly the runt of the litter, but in a strong field,  nudge in direction towards the jazz fusion area comes  on 1977’s Jet Lag that saw the band shifting  away from their progressive roots. The acoustic Peninsula seems an understated but bold intro while Di Cioccio’s vocal takes on an increasingly quivering manic tone as the band noodle in a way that some may call aimless, while the  more tolerant and flexible  may admire their attempts at more freeform expression. Breakin In excites much more in a brief passage of immediacy and a hint of something a bit more heavyweight and meatier that requires less work on the listener’s behalf as the jazzier direction clearly satisfies the band’s need to progress and challenge themselves yet  results in the least satisfying experience of the four.  Following on from three albums set more in the progressive vein had clearly inspired the band to be bold enough to seek new directions, yet by comparison and even with hindsight, Jet Lag seems the least rounded and comfortable of the set.

Next up is a close run thing. It may have jockeyed with  The World Became The World for the runner up spot,  1973’s Photos Of Ghosts  just misses out despite being  buoyed possibly by grabbing a lovely vinyl copy at Cropredy this Summer and indulging in some vinyl porn means the 1974 album trumps it. Maybe on another day the positions may get reversed. While River Of Live may not be a particularly attention grabbing intro, Celebration fair belts along but remains the highpoint amongst an album that is relatively (in the nicest sense) pedestrian. Easy and laid back might be more apt. The end section of the title track peps things up with some fine folksiness and a Wakemanesque cameo, but as some parts excite, some labour.  Similarly, Il Banchetto serves up some pastoral moods before a dancing piano part takes over.

The opulent  choral opening of The Mountain  suggests that 1974’s The World Became The World might follow a more grandiose path. As it travels through various sections across ten minutes, a little judicious trimming may have been pertinent. The title track offers more in less; the contrast of pastoral acousticity and the court of the Crimson King grandiosity much more telling.  In its favour, and what may have swayed the final decision, there are a couple of sections which are amongst the highlights of the whole box –  the brilliant Tull-like folky jig along to Four Holes In The Ground led by a honking synth that soon runs into a 10CC-a-like section  and a hint of what It Bites would call on for Calling All The Heroes; plus the lovely flute led melody that closes out Just Look Away that wouldn’t be out of place in a Best Of Steve Hackett set. The album ends with an appealing Beatle-y moment as Have Your Cake And Beat It threatens to close out with not so much of a bang.

So pop pickers, at Number One, from 1975, the pick of the PFM catalogue…tada…Chocolate Kings. Maybe not a major surprise, but the chance to reassess all four albums in one go gives the quite unique opportunity to play the ranking game and Chocolate Kings is the one that inevitably finds its way back to the player.  Amongst the five mid length compositions, the title track could well be the PFM signature tune. Keyboard runs that recall Keith Emerson in his hoedown heyday and an uptempo early Genesis styled chorus, it might have been their shot at the singles market, but remains at the centre of PFM’s most consistent album.

From Under buzzes along with a bass line high in the mix and there’s barely a moment to catch a breath as PFM prog rock as hard as they have done. Harlequin is one of those songs where you can appreciate why fans of the early days of Genesis latched onto the Italians. It could easily be an outtake from Nursery Cryme or Foxtrot with its gentle acoustic guitar that builds into a Hammond stabbing frenzy. With Paper Charms they also have a closing track that befits the status with its keyboard fanfare and mid period Yes styled guitar runs and the sort of arrangement that would inspire bands like Spock’s Beard and the new generation of prog rock bands in the decades to come.

Watch PFM performing Chocolate Kings on, where else but The Old Grey Whistle Test, in 1976: