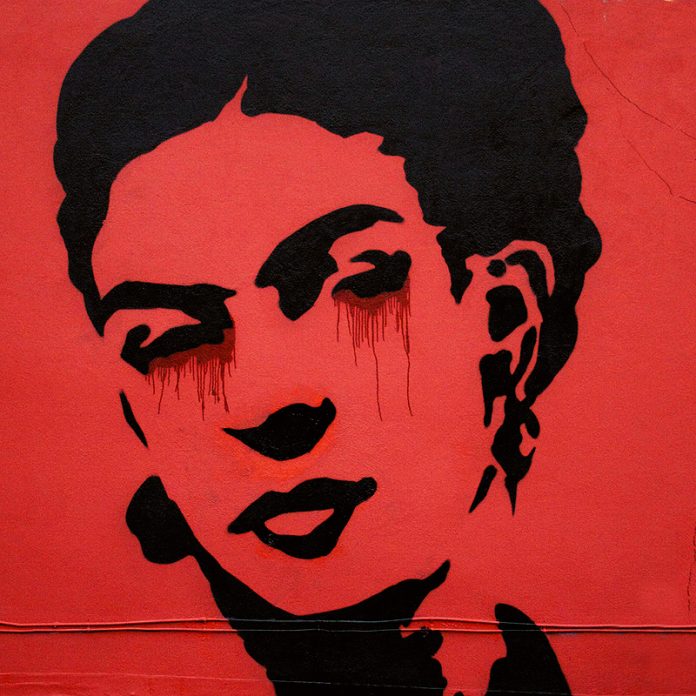 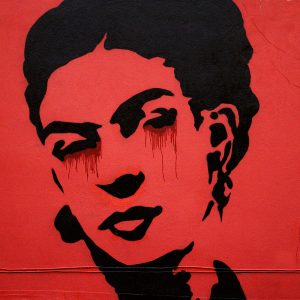 This review is dedicated to the memory of Steven Wells. He would have fuckin’ loved this band.

It was the album title that first struck me; it jumped out from a list of new releases; A defiantly appropriate title for the first great album of the year. Then Pettybone the name, derived from, as I suspected Raymond Pettibon ”â€œ hardcore artist responsible for Black Flag and more recently OFF!’s artwork. Then the album cover, a black on red spray-can stencil portrait of Frida Kahlo. Then I read the manifesto that makes up the introduction to their eponymous song.

Without hearing a note I knew this band had to be something special, hopefully the properly politically engaged/enraged band that we (the Punk-affected generations) had been waiting for . . . this decades Clash, Crass or Manics?

Pettybone are four women in their early twenties based in London inspired initially by Bikini Kill. Their hard-to-pin-down sound is a mix of DC hardcore, screamo, no wave, anarcho punk, grunge and riot grrrl. It is as unique as it could be but you can hear a bit of this and a bit of that every now and then

Le Regard starts like a tougher version of indie-pop band Lush before turning feral. Conspiracy of Women (C O W) takes its title from Lydia Lunch but is pure Black Flag in turbo-charged style. The way the lyrics don’t quite fit the music and use of Situationist slogans is, to me, an echo of the early Manic Street Preachers. There are some great Joey Santiago type plaintive guitar patterns that hang in the air”Â¦. One intro sounds like a Hole song”Â¦. A couple of dirgey, cavernous basslines could be from Lydia Lunchs 13:13 album ”Â¦and so on and so forth.

Its an economical album; Just nine songs in 23 minutes and (a three minute gap then) an idiosyncratic no-wavey blues-jam instrumental introduced by a bit of Muddy Waters dialogue; ”ÂThe blues is when you aint got no money to pay your house rent and it got you thinking evil..”Â. It’s a confident band that use the last section of their debut album to experiment.

The strangest song, in that it takes a while to get used to it, is a cover, make than deconstruction and re-assembly of Justice Tonight, (as covered by the Clash) which replaces dub with gothic dirge and Keith Levene type guitar playing which could, I guess, be described as ecriture feminine in style.

Every song is packed with rage and emotion and the pace varies from full-on ”Ëœpower-violence’ to see-sawing dirge. And some like Northern Line have both speeds. The manifesto song, the title track and To Hell With This Culture set out the political agenda yet still there are love-songs. Oh! I Love You, Say it with Cobblestones compares or combines the heart-stopping excitement of falling in love with the adrenaline rush of being in a riot (I think).

This is a band that sticks to the D-I-Y circuit and often plays on bills with grim Anarcho Crusty bands, and then, the glossy Metal magazines have taken a shine to Pettybone”Â¦ four girls with guitars and a ferocious live show being irresistible and perfect for their young male target audience.

They’ve been called the best new band in the country and deservedly so, based on this magnificent debut album, which even in January I was thinking of in terms of album of the year. I’m seeing them live in a few weeks”Â¦. And if I was a 15 year old girl and not a 47 year old bloke they would change my life forever.