I generally dislike drum solos during gigs – come to that, solos on any instrument.  (I’m not impressed by virtuosity for virtuosity’s sake – only when it makes a valid contribution to a composition.)  The exception to my rule presented itself during my student days at Hatfield Polytechnic in the mid ’70s when comedy punk outfit Alberto y Lost Trios Paranoias came to play one of our New Year parties.  Their drummer did a hilarious solo (or so I recollect – I was very drunk and it was a long time ago) which mocked various drummers and, particularly, drum manufacturers of the day, and during which he systematically dismantled and disposed of his kit whilst playing continuously.  It appears from a quick sortie on Google that this would most likely have been been Bruce Mitchell, though could possibly have been Ray ‘Mighty Mongo’ Hughes – perhaps someone can enlighten me?

There doesn’t appear to be any footage on YouTube featuring said solo, but you can find a few old clips of the Albertos being daft if you’re so inclined. To be honest, I think you had to 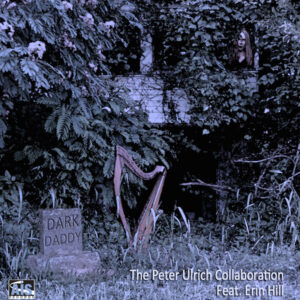 be there, and probably had to be quite drunk, but I’ll leave it to you…

~
You can find out more about the upcoming single, Dark Daddy (cover art to the right) via City Canyons website: citycanyons.com. Peter can also be found on Facebook.

The Peter Ulrich Collaboration will be releasing its second album Tempus Fugitives in early 2015.