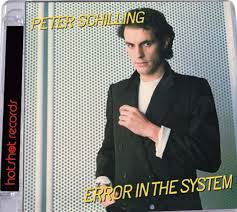 Peter Schilling – Error In The System

Reissue of the English language version of the “Major Tom” hitmaker’s debut album, with associated single cuts and the original German versions of the LP tracks….LTW’s Ian Canty looks at an 80s worldwide phenomenon that stopped just short of the UK Top 40….

The early 80s was a very successful period for German artists in the UK, rounded off when Kraftwerk topped the charts with their (at the time) five year old album track “The Model” at the start of 1982. Of course they were a great, visionary band, but artists with a little less credibility (ok an awful lot less) like Nena and Trio also scored big hits around that time too. Peter Schilling’s reworking of the storyline of David Bowie’s “Space Oddity”, “Major Tom” just missed out here, making number 42 before dropping down. But the track was a massive hit all over Europe, attaining the top spot in four countries and narrowly missing out in another two. In the US the song reached the top 10 too and obviously made an impact in popular culture there as it even made an appearance fairly recently in “Breaking Bad” TV series.

Of course Bowie himself had tinkered with the idea again only a few years previously with “Ashes To Ashes” and I suppose “Major Tom” may have been the result of a yearning to know more of the story of the doomed astronaut and Schilling supplied just that. The song itself offers a bit more hope than the bleak scenario set out by David originally, in that the repeated refrain “coming home” that marks the end of the record, is perhaps giving a sign that rather than having perished, Major Tom is still alive somehow……but basically it’s just a nice, cheesy and mad bit of epic, over-blown 80s pop. The sound of this single seems to owe a decent-sized debt to Ultravox, Gary Numan and Robert Palmer (circa “Looking For Clues”), but “Major Tom” (and its following instrumental coda) is difficult to dislike in its open eyed wonder.

Peter Schilling had been labouring away since 1976 without much success. His first waxing, “Träume sind mehr als nur Illusionen” (in English “Dreams Are More Than Just Illusions”) came out that year and a few more 7″ inch efforts in the next half decade didn’t make much headway until his boat came in with “Major Tom”. With this album he specialises in a kind of Electropop/New Wave that wasn’t a million miles away from Teutonic Jona Lewie (which in my opinion is far from a bad thing – I love Jona!). On “Error In The System”, Schilling shared the general paranoia that gripped the Pop scene at that point of time, as it appeared that the West and the East were teetering on the point of a nuclear war. The title track itself (a beaty piece of fast synth-pop) seems to point to the hopelessness of the situation, humans “banished” to suffering on earth and the self-explanatory “USA” lambasts the empty consumerism of Uncle Sam.

Though “Major Tom” chimed in with the times, it would be wrong to consider all that is here faddy New Romantic take-offs. There’s the excellent, self-effacing “I Have No Desire” (sounds a bit like Dave Edmunds gone electro after bumping into Mental As Anything) and the sleek Pop Reggae of “Lifetime Guarantee” which for me hits the spot better than the Police (and many others). “The Noah Plan” borrows a bit of “Heroes” and the opening track “Only Dreams” even possesses a hint of the edgy, lo-fi sound of the Young Marble Giants. Through the disc’s running time, Schilling cannily manages to squeeze (no New Wave pun intended) some neat new kinks to what at the time was becoming a pretty staid format.

Though Peter Schilling would never replicate the success of this LP and its attendant hit single, what he came up with here is a consistently enjoyable record that may be a little “of the times”, but given the currency of these type of sounds in 2016, you would hardly notice if this was in fact a new recording rather than a reissue from 34 years ago!