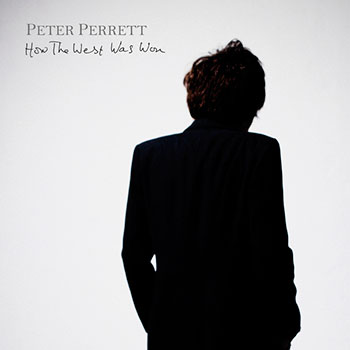 Peter Perrett: How the West Was Won  (Domino Recordings)

For long time fans, like Ged Babey, a new album by the former singer & songwriter with the Only Ones, is something they never, ever thought would happen. So consequently it’s…

Album Of The Year. No question.

It’s perfect,  in every way…

…It will make you cry (if you have any heart and know the Perrett story).

Musically it is ‘old-school’ and ‘analogue’ and faultless; Shimmering, shivering guitar and eminently subtle backing underpinning the gilded fluidity of the songs.

It’s like a fantastic, diamond-cut palace  made all of glass, perfectly symmetrical and equally beautiful from each and every angle… when it catches the light, it dazzles you.

But you knew I was gonna say that didn’t you?

I’ve been lucky enough to live with How the West Was Won for six weeks now, ahead of  release.  There has not been a day when I haven’t listened to it. Exploring every hook and cranny, every sly rhyme and echoing reverberation.  So when I say it is up-there with Even Serpents Shine (the Only Ones second CBS album -and arguably the best, a lot of peoples’ favourite) or Lou Reeds best work or Nick Cave at his most tender, then I really have given it a lot of  time, thought, consideration (and love).

This is already one of my all-time favourite albums. Ever.

I honestly don’t think there will be any long-term Perrett followers who will be disappointed with How The West Was Won.

Of course, it is not an Only Ones album. (So don’t expect it to be.)  It’s different, mellower, but the songs carry on in exactly the same tradition, with similar themes, idiosyncrasies and nuances.  There are no kick-ass rockers like Language Problem or Me and My Shadow.  Peter is 65, he wants his lyrics to be heard, relished and enjoyed. He wants to leave his own distinctive mark on the frantic, disorientating timeframe of 2017.   Amongst all the madness of the year, here is an oasis of languid joy, melancholy, fatalism, love, pain and redemption. He sings, as ever, about his life, from his viewpoint and in his own unique way.  His voice has actually never sounded better. Not so much honey-dripping off a spoon, more like the purr of a contented old tom-cat.

The songs which particularly grab your heart and push out the tears are the ‘love songs’ to, or about his relationship with, his wife and soulmate Zena. They are at the heart of the album, but there is more to it.

There is also the quite brilliant and much-discussed, wry look at American imperialism and KK’s arse, that is the title track; the fans of old know that it follows up Shivers, a song which declared an admiration of Castro and ‘the curvaceous rear-view of women’ and another great song called Land Of the Free from the time with the One.

One of the most recently written songs is the frank and darkly funny song about crack addiction; Something In My Brain. In which Peter compares himself to the lab rat who had to choose between food or the drug and chose death.

But I didn’t die… at least not yet. / I’m just about capable of one last defiant breath..

There are so many quotable, pertinent and brilliant lyrics that you are just spoiled for choice. Every review is be-jewelled with them.

The future of rat-kind just seemed dystopian rhymed with cut their stomachs open is my absolute favourite couplet.

There is not a word or note wasted – or a song which is weak, it really is – possibly by chance rather than design – a perfect album.  And not just because it’s making up for lost time and wasted years…

At first listen perhaps it may seem like a Last Will and Testament -he always did flirt with death after all,  but Peter sounds so healthy, on-form, funny and resolutely open that, this could be just the start of his renaissance – the first of a trilogy perhaps – if he can keep that grim, hooded cunt with the scythe at bay for another ten years or more.

How this album will sound to people unfamiliar with Peters work I really don’t know… it’s thoroughly accessible, without being bland or overly-polished.   Musically reference points are the Pretenders ‘Kid’, The Velvet Undergrounds 3rd album, Urge Overkills  ‘Girl You’ll Be a Woman Soon’ and Lou Reeds  ‘Coney Island Baby’ but there are echoes of Dylan, the Stones and Neil Young; this really is a quality ‘classic’ album rather than some re-hashed ‘new wave’.

That said, ‘Troika’ is a beautiful piece of pop; ‘referencing’as it does James Honeyman-Scott’s guitar from  ‘Kid’ (discussed here)  “as an in-joke but also as an homage to a great guitarist” as Peter says in a wonderful interview with KEXP.

‘Hard To Say No’ from the first time I heard it, made me think of Amy Winehouse (an artist every bit as iconic and wonderful as PP in my opinion) and her Back To Black homage to the Shangri-La’s – a band also beloved of Mr Johnny Thunders.  It is one of those Perrett Hit Singles from a Parallel Universe like Out There In the Night and You’ve Got To Pay.  Weirdly as well, the only other song to use the word ‘Bleeder’ that I am aware of is Blondie’s ‘I Didn’t Have The Nerve To Say  No’ -another piece of dark pop about intravenous drug use.

Living In My Head is the strangest, most psychologically psychedelic song; traces of a female voice whispering over the chorus are so lightly mixed that you think you have imagined them the first few times you hear the song.  The extended guitar outro is a great unfiltered interpretation of the lyrical delirium; father and son perfectly on the same wavelength. (See also Something In My Brain – a great piece of purposefully fucked-up guitar-soloing from James -matching the lyric to a tee.)

C Voyeurger is beautiful and desolate, recalling the doomed romantic spirituality of the third Velvets album.  I remember Zena was in hospital with pneumonia at some point years back and this song seems to be about that time and Perrett contemplating the unimaginable: life without his soulmate.

There are points at which Perrett knowingly steps outside of the conventions of the song, in a lyrical equivalent of breaking the fourth wall almost.   ‘Driven to abstraction‘ and ‘Just then a train of thought, stopped at a station. I got off…’ are two examples, securing his position as one of the countrys best songwriters.

He also refers back to previous works: As I said, ‘This must be true love… comes from As My Wife Says. A reference to a girl ; even though she’s earthbound is an obvious one.

The closing track Take Me Home  is almost sentimental until you remember that the place referred to is possibly ‘miles from anywhere’. and Perrett always insisted.. ‘I wanna die in the same place I was born...  or am I making connections which just aren’t actually there now?

The three songs which are the beating heart at the centre of this album are An Epic Story. Troika and C Voyeurger . The songs about Zena and their extraordinary relationship. If Peter Perrett has done nothing else, he has set the record straight; that without her he would not be the man he is (She was the Only Ones manager and always the driving force behind his career, as well as his wife).

My good friend Gus Ironside, a fellow devotee said this on first hearing the album

It is stunning. Lou Reed would have sold his soul to write an album as good as this- it’s got that kind of ‘Glory of Love’ doo-wop sincere romanticism that Lou venerated so much.

He added a Youtube link to The Five Keys ‘Glory of Love’ as an illustration.

I know I’m prone to exaggeration and that over-egging a pudding can make it unpalatable… but this really is Peter Perrett producing an unexpected masterpiece.  It is all about his words, voice and stories – but without the sympathetic musical accompaniment from his sons (and daughter in law) it wouldn’t have been anywhere near as perfect. The playing, the backing vocals, the light, airy production is all spot on. Immaculate, (But no longer stoned).

There is no separation between the myth & legend of Peter Perrett and the truth, the man, the reality. They are one and the same. It really is an Epic Story.  The Immortal Story. And How The West Was Won was a chapter no-one was expecting to see the light of day.