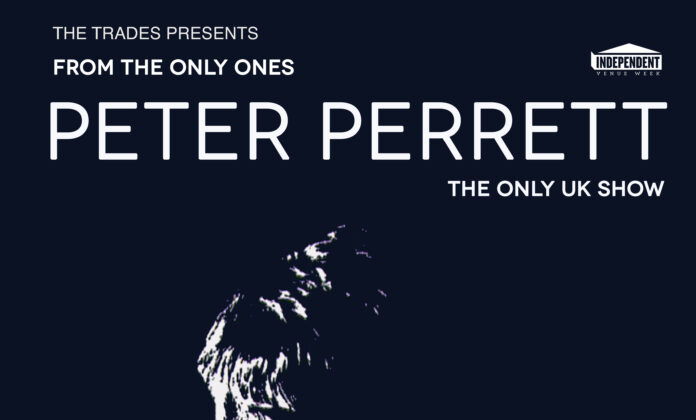 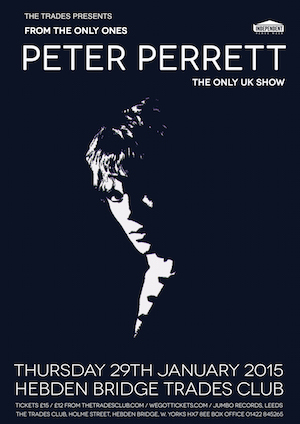 Alan Grundy braves a blizzard to catch the “only UK show” of the year by The Only Ones front person Peter Perrett.

Peter Perrett, well where do you start?

Formed The Only Ones in 1976, lumped in with the whole punk/new wave movement (although Perrett’s first musical foray was much earlier with England’s Glory). Released three critically acclaimed albums before the band’s breakup in the early 80s. There’s been much conjecture about the breakup – lack of success, drug problems although Peter puts the main reason down to the fact that the band just weren’t getting on.

Then followed nearly 10 years of drug-related seclusion before he resurfaced with a new band The One who released an E.P. and album. Peter then disappeared again apart from a couple of guest appearances until 2007 when The Only Ones reformed (in the wake of Another Girl, Another Planet being used in a mobile phone advert). A couple of tours and a series of one off gigs have kept the fans happy(ish) but although new songs were aired during this time and a new album promised there’s not been any release of this new material.

The Trades Club is a music venue and socialist members club in Hebden Bridge, West Yorkshire. Built in 1923 as a joint enterprise by half a dozen local trade unions and brought back to life in 1982, it’s hosted many high profile gigs including Patti Smith, Wilko Johnson and Buzzcocks and is worth checking out at thetradesclub.com or their Facebook page.

On my (sadly) infrequent visits, there’s always been a great atmosphere, excellent sound and cheap drinks!

I set off for the gig (with a long-time gig going mate from the 70s onwards) in fairly good weather but when we reached Rochdale, hit a blizzard! Oh crap! I’m sure Hebden Bridge is higher up in the Pennines, what’s it going to be like when we get up there? Fortunately, the snow hadn’t reached Hebden and apart from a few icy pavements, the way to The Trades was clear.

We settled in to catch the first support band Deadwall a Leeds-based four piece who describe themselves as “treads that well worn line of beauty and brutality”. The singer’s distinctive vocals, great instrumentation and some fine songs made this a good start to the evening.

Second act up Strange Fruit continued the rich vein of music and made the trip worthwhile even before the main event! Strange Fruit comprise Perrett’s two sons on bass and guitar (who were also together in an early incarnation of Babyshambles and their own band Love Minus Zero), Jake on drums and distinctive vocalist Jenny. Their (sadly) short set was explained when three quarters of the line-up (minus Jenny) were Peter’s backing band (although backing band doesn’t truly do them justice).

The appalling weather had restricted the turn out but as Peter took to the stage, everyone was expectant. In the past, you’ve wondered if this was the last time you’d get to see him but in my opinion, (although still plagued by poor health) he was looking less fragile then when I’d seen him with The Only Ones recently.

The Only Ones are one of those bands that everyone seems to have a different favourite song – well the first nine numbers must have satisfied much of the audience with a series of classics including Prisoners – Keith Richards’ favourite (although I don’t think he was there) which wasn’t released until after the band’s demise. There followed a mix of new and old songs all of which were greedily eaten up by the crowd.

During the set, Peter seemed really relaxed, chatting between songs (perhaps there was less pressure on an out of London gig) and was obviously enjoying playing alongside his sons.

It was good to hear a different take on some of the old songs and with Peter Jr. on bass and Jake on drums forming a formidable rhythm section, the basis was laid down for Peter’s unique vocals and Jamie’s (“the naughty son”) guitar. It wouldn’t have been easy for Jamie to replicate John Perry’s fretwork so he didn’t and made the songs his own with his individual runs and solos. He showed a genuine affection for the songs, smiling throughout the set (no tortured guitar hero grimaces here) and singing along even when he wasn’t doing backing vocals.

With Peter’s concern for the gathering’s trip home in the Arctic weather (bless ‘im) we had an impromptu encore break before a couple of songs with the band after which Peter (and the crowd) thanked them and we were then treated to the final two songs solo. Now throughout the gig, the audience had been rapturously respectful but fuck me, you could have heard a pin drop when there was just Peter and his Telecaster so much so that the guy who’s phone went off was truly embarrassed!

We would have loved more solo tunes but Peter’s voice was going and sadly, all good things must come to an end.

Although this was billed as Peter’s only UK show, surely January is a bit early to say this so we can only hope.

The new songs featured offer high expectations for a forthcoming The Only Ones album and Peter says that he has “about 23 songs” he’d like to record but has settled on rehearsing “10 or 12”. “I’m not going to be ambitious and do them all in one go,” he says. “I’ll do them in batches of four or five songs.”

Personally, I wonder what happened to the takes of some of the earlier stuff such as Black Operations.

A new Only Ones platter would be much appreciated, but then again why not one with Perrett & Sons?

All words by Alan Grundy, find his Louder Than War archive here.