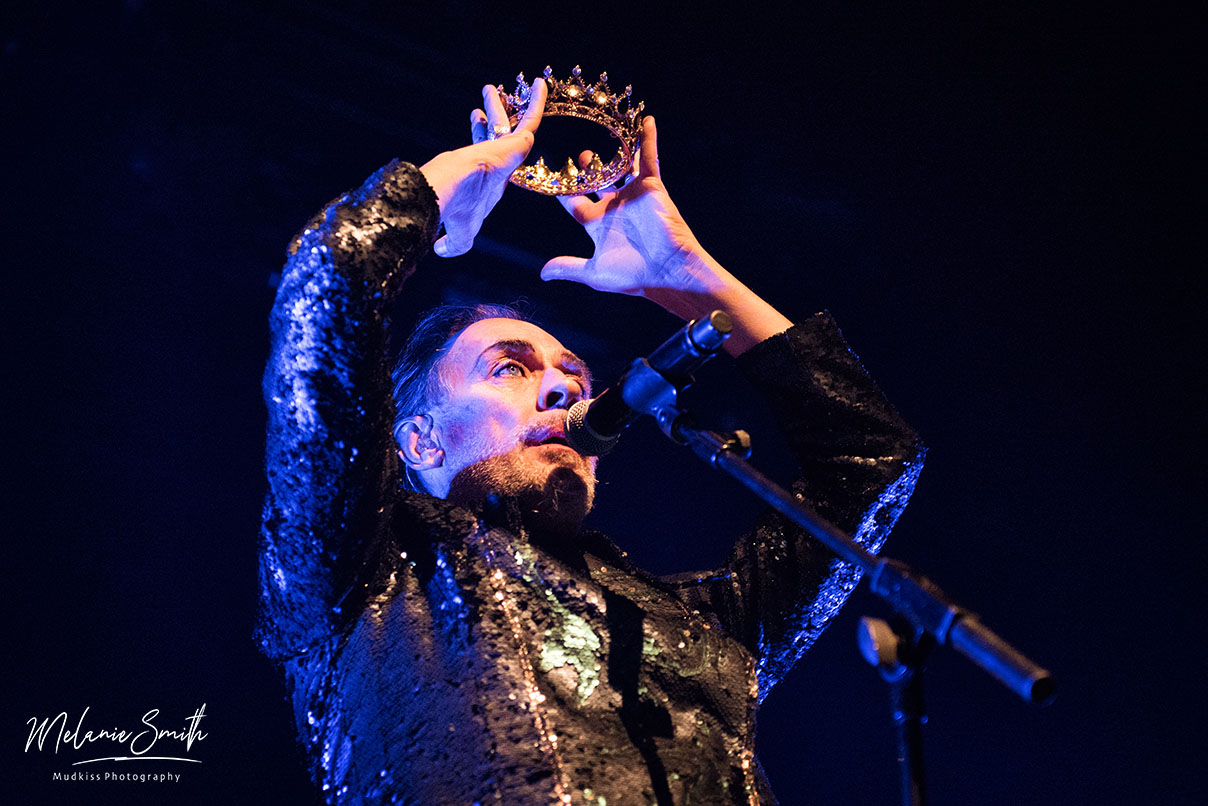 Bauhaus, post-punk or the progenitors of goth? Whichever way you look at it they were hugely influential in the late 70s and early ’80s before breaking up in 1983. Former Northampton printer-cum-model and front-man Peter Murphy has taken original bassist David J on the road to perform a medley of the band’s material. Nigel Carr and Melanie Smith got stuck in at the O2 Ritz for a night of thunderous basslines and Murphy’s inimitable vocals.

Like Joy Division and The Cure, Bauhaus’ position as one of the originators of goth has matured over the years, giving them an almost legendary status, influencing a huge number of bands, from Soundgarden and The Smashing Pumpkins to Nitzer Ebb and Nine Inch Nails. The cult of Bauhaus continues to spread. Their mesh of Ziggy-meets-Iggy-meets-death has permeated into every area of popular culture. Those modern take-on vampire serials with their film noir malevolence owe much to the perpetuation of the dark heart of the band and its singer.

The root of this can be found in their 1979 debut Bela Lugosi’s Dead. Steeped in an almost Bill Laswell style ultra-heavy dub, the single celebrated one of the genres most original actors. Lugosi played Bram Stoker’s creation on both stage and screen and died during the filming of Plan 9 From Outer Space in 1956. The track, at over 9 minutes long forms the centrepiece of tonight’s show. Frankly, it was the one song that almost the entire audience was waiting for!

Marlene Dietrich warbles from the speakers – Falling In Love Again – Where Have All The Flowers Gone (the songs evoke Berlin, cabaret & decadence, and a woman who has always held a certain fascination for the singer) before the band burst on to the stage. Murphy looking fit and lithe, his chiselled pretty boy features matured and obscured by a wispy, Fawkesian, almost Machiavellian beard. 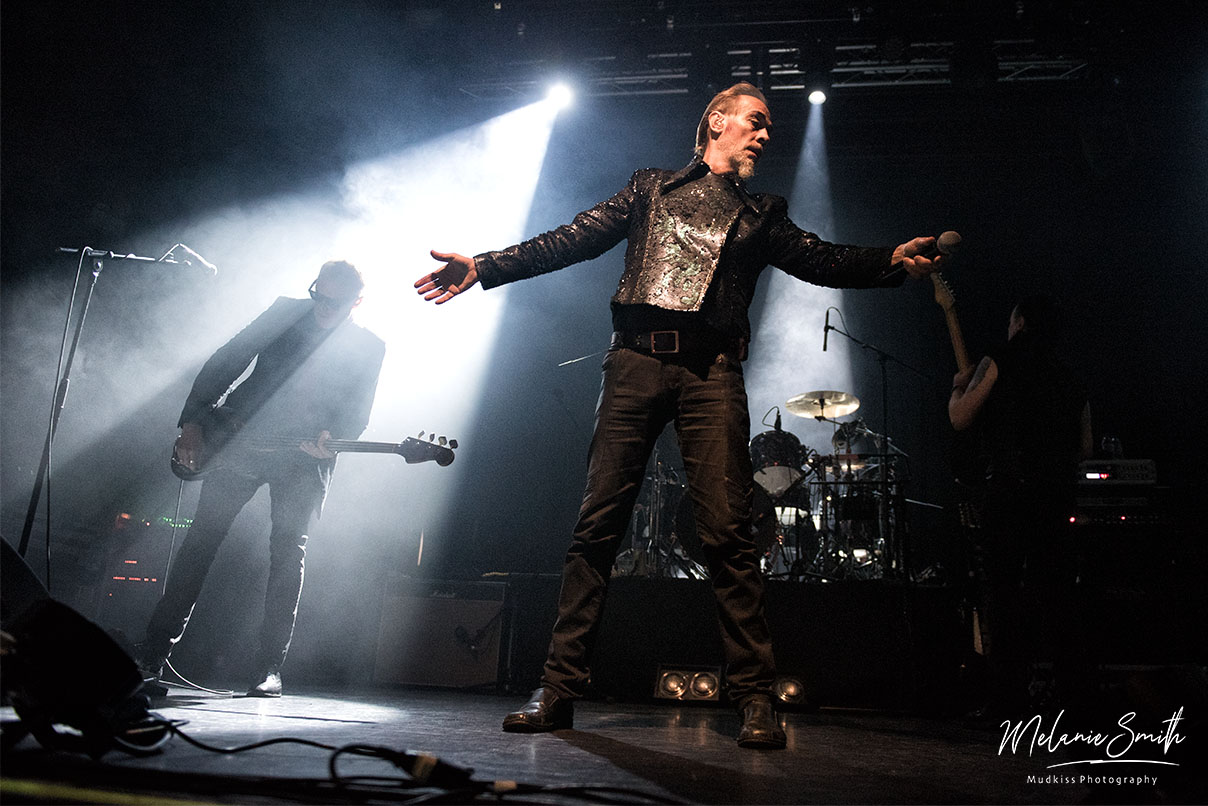 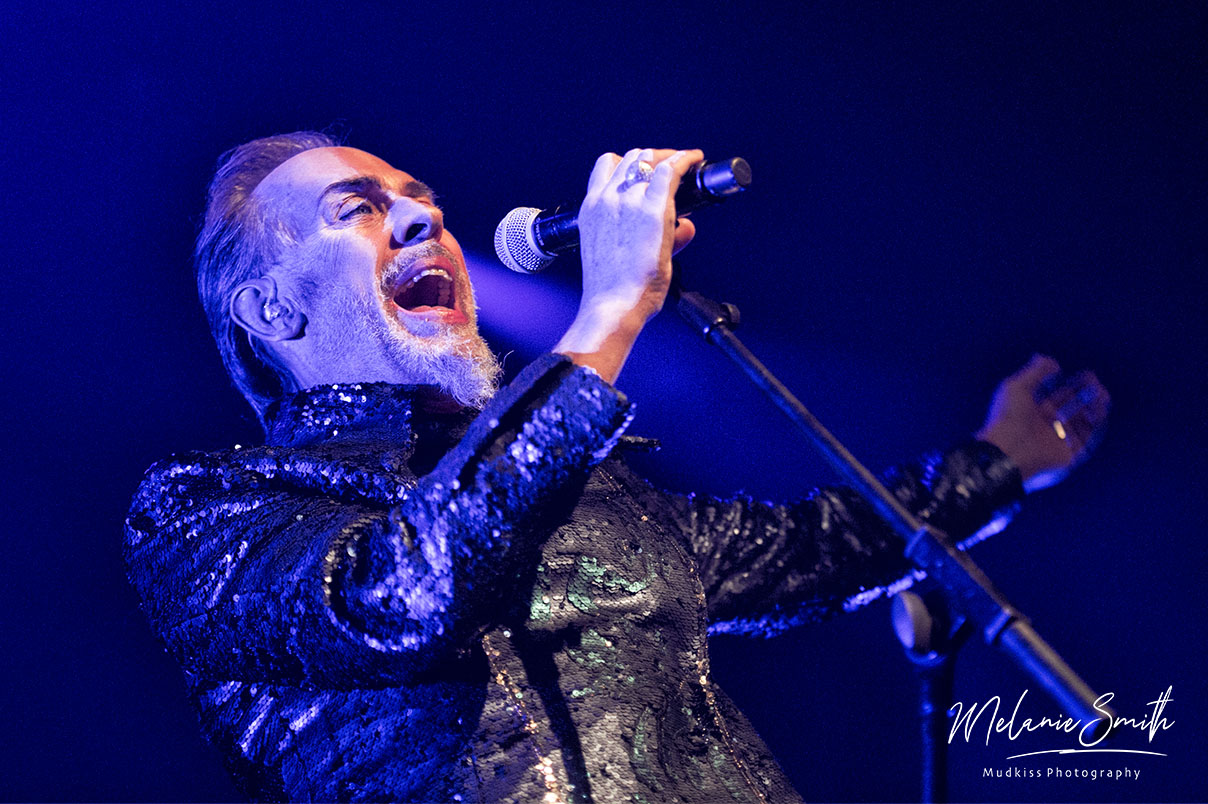 Straight into Double Dare, and after a few tweaks to the mic, In A Flat Field, the title track off the first album. Murphy spins and pirouettes on stage, dressed all in black – of course, leather trousers, sparkly biker jacket – thinning hair – but the voice! The voice hasn’t lost any of its potency. Murphy’s vocal talent cannot be denied, its deep timbre, slightly affected, with a Bowie twang, utterly wonderful. He spins and crouches placing a small golden crown atop his head – looking like Brandon Lee in The Crow – an evil, slightly coquettish stare!

Murphy works the stage, an old hand, he struts back to the drum kit and spins around theatrically before pointing at the audience as the lights dramatically drop. During Spy In The Cab the singer stares in to a bright light stage right, dramatically shielding his eyes, squinting – ‘an eye for an eye’ – ‘a spy for a spy’ the mic darting backwards and forward, his tongue doing the same – his own inimitable way. 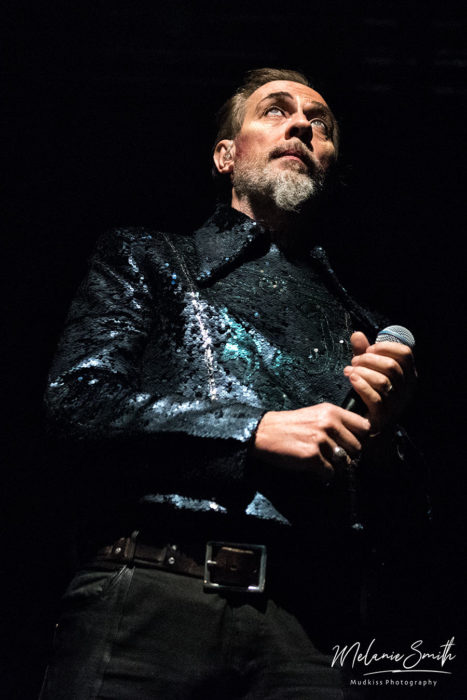 Small Talk Stinks sees a small loudhailer come out, held at arm’s length – screeching into the mic. During Stigmata Martyr the jacket’s off and the mic stand Is lifted over the singer’s shoulders, an image of Jesus on the cross in swirling dry ice, while David J’s unsettling bass and Marc Slutsky’s incredible drumming provide the crunching backdrop.

The gig moves up a gear with the thunderous applause as the opening strains of Bela Lugosi’s Dead crank into action, the clicking drum beat and deep, deep bassline so familiar, so haunting, so damn good! The auditorium bursts into life with the now bouncing mosh pit springing the night’s first crowd surfers. She’s In Parties has developed its own dub beat, sounding strangely PIL’ish and at this point, Murphy has positioned himself behind the drum kit adding some beats of his own!

I’m expecting a couple of encores tonight but as the band crank into the almost disco-oriented Adrenalin from 2008’s Go Away White the show crunches to a close. I’m pretty sure Murphy loses track of the time as they are quickly back on stage – ‘We’ve been told we’ve got 5 minutes – this will keep you going for a year!” before they career into Ziggy Stardust, a fitting and almost maniacal close!

What a show, what a showman! The place was packed, such is the clamour for such an original, such a legend. Let’s hope that the rumours of the full Bauhaus band is true but frankly when this line up is just so good who needs it?!