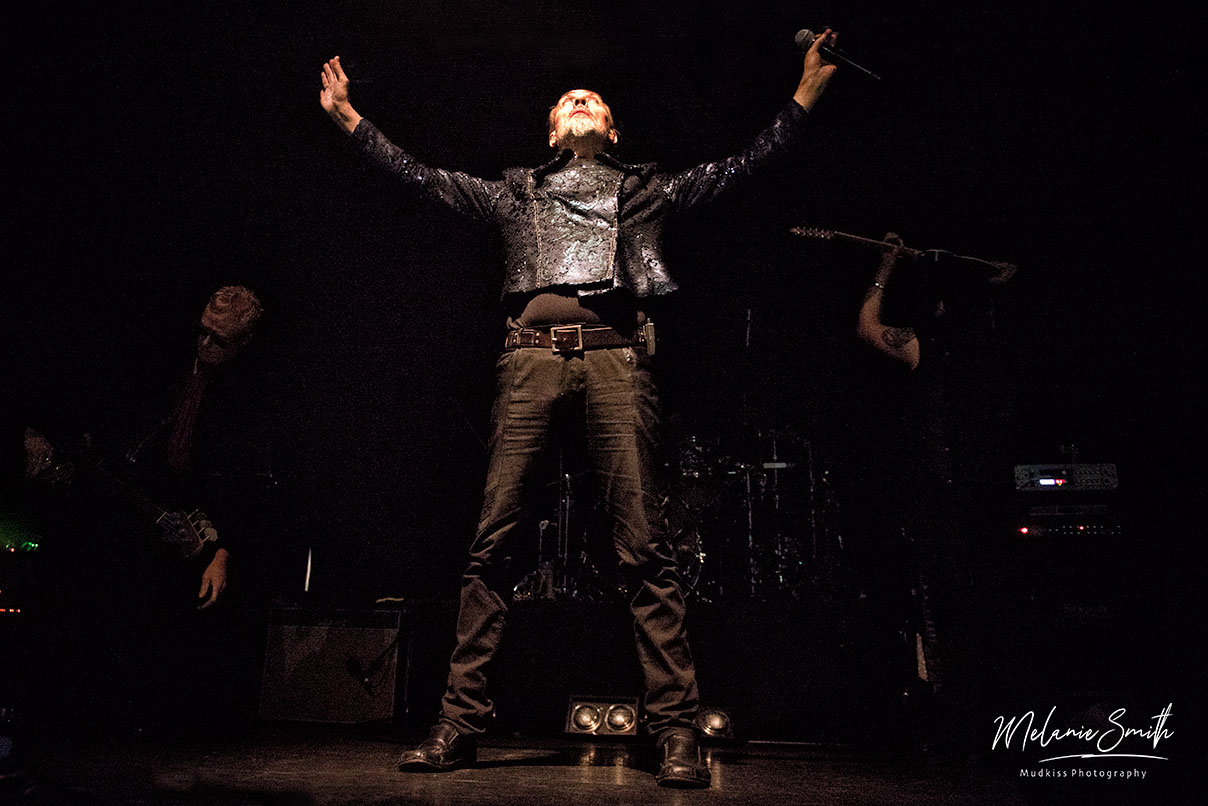 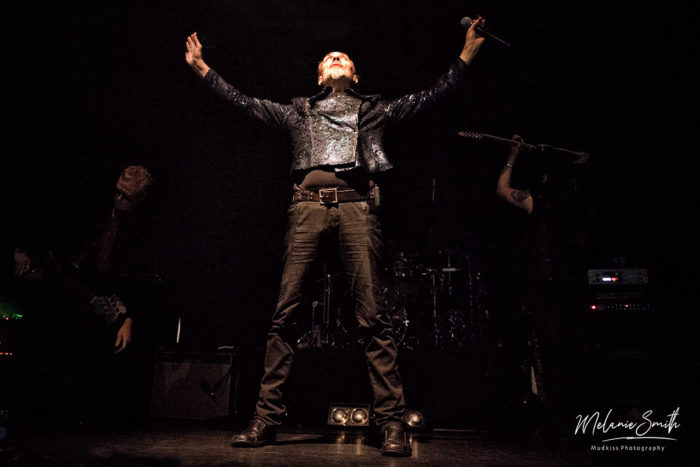 Billed as a celebration of Bauhaus, a celebration of 40 years since the bands inception, and playing two nights at The Roadmender in their home town of Northampton, two of the original members; vocalist Peter Murphy and bassist David J perform the music of Bauhaus, together with the brilliant Mark Gemini Thwaite on guitar (Gary Numan, The Mission and stalwart of Peter Murphy solo for many years) and New Yorker, Marc Slutsky on drums. Mark (MGT) does have history with this music of course as he played on Peter Murphy’s Mister Moonlight tour – 35 Years of Bauhaus, errrm five years ago. This could have been an altogether different band though as MGT urgently filled the gap left by an absent John Andrews (the original choice) due to an unforeseen medical emergency.

Hastily slotted in prior to a previously sold out engagement at the same venue the following Thursday, this Sunday evening performance now holds the accolade by becoming the first UK date of this ever-swelling extensive world tour.

Following sets by Thomas Truax and Desert Mountain Tribe, a montage of Dietrich songs fills the Roadmender, “will they do this, will they do that” chit chat, back chat, idle gossip…It’s been thirty-eight years since Bauhaus played this venue, OK so this is NOT Bauhaus, and neither is it claiming to be, but in the eyes of the largely black clad masses gathered here, it may as well be, take it or leave it. I should imagine much of this audience (this writer included), have come to see three numbers –Dive, Small Talk Stinks and Nerves, non of which have been played by any former member of, or indeed collectively, Bauhaus, in any guise since 1980.

The promise was In The Flat Field in its entirety followed by an “extended encore of Bauhaus classics” and so Double Dare kicks off proceedings, to a deafening roar from an already apprehensive, charged up audience, David J’s thunderous opening notes echoing around the venue whilst Marc Slutsky drops in carefully placed sonar blips before the song explodes into the seismic, roaring beast that we know and love, a slightly delayed vocal from Murphy who appears circling, like a prowling panther through the dry ice and blue drenched stage, now sporting a dishevelled but striking beard and bearing an uncanny resemblance to Jeffrey Dean Morgan’s Negan, resplendent in a fabulous sequin jacket, and they’re off…

Close your eyes, welcome back to 1980. The band tear through a rousing In The Flat Field and A God In An Alcove (Murphy placing a crown upon his head, angling it slightly to one side as the song concludes, cleverly, if subliminally, reflecting the subject matter of fallen idols). And here’s the first of THOSE songs, MGT kicks off Dive emulating flawlessly Daniel Ash’s original razor sharp chords, the crowd are pleased to get it… ”if you ask for a song, we won’t play it” retorts Murphy following the usual barrage of catcalls…an almost motionless David J takes his cue from MGT as he delivers his single note bass line reminding us we are about to get Spy in the Cab. Side one finished – The second of THOSE songs now opens side two and Murphy, using a treated megaphone, captures perfectly his studio vocal for Small Talk Stinks twisting and wrapping it around David’s chanting of the song’s title. Continuing to use his megaphone to recite (acapella) the first verse of St Vitus Dance before the band launch into the song proper, St Vitus Dance made a very welcome return when Bauhaus (that’s Bauhaus) fused it with Joy Division’s Transmission during their 2006 dates, it was nice to see it unaccompanied here.

An ethereal Stigmata Martyr had Murphy meandering his mic stand, emulating the crucifixion, unruffled by an incredible undercurrent, an array of soundscapes consisting of a female operatic vocal performing Puccini looped backwards (created for this tour by the brilliant noise Guru Tim Newman) under a hail of flashing white strobes, remember folks,coloured lights are for Christmas trees…And now here’s the third of THOSE songs, Nerves, I was a little concerned how this, the most atmospheric, sparse and downright terrifying track on the record would be recreated, I needn’t have been, the unrivalled highlight of the Flat Field set this evening….Murphy exiting stage left during the song’s refrain, leaving David and MGT to chant its ‘nerves like nylon, nerves like steel mantra’. Thirty-eight minutes later (that number again) and its done, In the Flat Field, signed, sealed and delivered.

After some minutes steeped in darkness and eerie silence, the stage is once again bathed in blue, and suddenly the show springs back into life as the strings of Burning From the Inside ring out, Murphy re-appears, band introduction’s done, he voices his displeasure of witnessing the amount of young homeless people around Northampton, this has clearly shocked him, a sight and plight that is sadly common-place throughout most major cities in this country today.

This element of the set could throw up any number of surprises, and between tonight and Thursdays (largely different set) return to the same venue, it does, this time though it’s Silent Hedges from their most successful album The Sky’s Gone Out up next, followed immediately by an (arguably and shorter) out of place Bela Lugosi’s Dead, placed here apparently at Peter’s suggestion, seemingly so as not to build it up into this big epic piece, the song would occasionally open, but more often than not, close Bauhaus shows. As the song (the entire session in fact) has just celebrated its return to vinyl late last month I was surprised by this placing, the audience were clearly very elated to hear it of course, wherever it appeared, as it was they who provided (replaced) much of Murphy’s vocals towards the songs climax!

Happy days are here again…She’s In Parties continued to delight the faithful whilst Murphy delivered his vocal and pianica accompaniment from the back of stage, out of sight. “Kingston to Detroit – this is for Iggy Pop” announces David J before launching into an Incredible Adreneline, Murphy soon denounces that remark with “FUCK IGGY POP, THIS IS FOR BAUHAUS” and continued to remind us of that fact as the juggernaut rumbled on, on a purely personal level, this one was the pinnacle of tonight’s performance, by some distance, and replicated that accolade on Thursdays return show…yeah, FUCK IGGY POP!

A shift from the assigned set threw up Dark Entries which brought the show to its conclusion, leaving an extremely edgy audience demanding more, and more was delivered; a rousing thrash throughBolan’s glam anthem Telegram Sam paving the way for Bowie’s glam anthem and Bauhaus’mainstream breakthrough Ziggy Stardust. Casualties of Thursday’s return was Burning from the Inside, Dark Entries and Telegram Sam, making way for a much lengthier set adding The Passion of Lovers, Kick in the Eye, Kingdom’s Coming, King Volcano, The Three Shadows (part two) and a cover of Dead Can Dance’ Severance.

Following a recent bout of laryngitis and fatigue leading up to this show, Peter appeared at times to be, and understandably so, holding back slightly, yet at others, and perhaps ignoring his doctors’orders not to, proceeded to deliver a superb vocal like it was his last.

A curious, if somewhat hostile, audience tonight witnessed something rather special…

Bauhaus’ “The Bela Session” is available now at

Bauhaus’ entire Beggars Banquet output: In The Flat Field / Mask / Press TheEject and Give Me The Tape / The Sky’s Gone Out / Burning From The Inside and Crackle are available now, each pressed on coloured vinyl at https://archive.beggars.com/bauhaus-colored-vinyl-reissues/