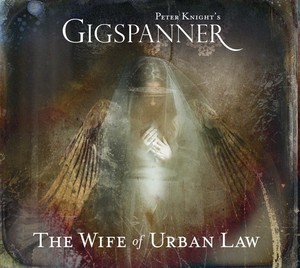 The Wife Of Urban Law

An unorthodox trio fronted by  one of the nation’s finest fiddlers.  Peter Knight is a genuine legend in the field;  a long term Steeleye Spanner, whose new  album continues the distinctive Gigspanner sound whilst   taking its title from  a 19th Century Oxfordshire gravestone.

Knight is joined  by regular guitarist Roger Flack and new percussionist Sacha Trochet, in a mixture of original tunes and folk song standards. Naturally, there’s a healthy peppering of classical and jazz influences as well as being a melting pot for a recipe that constantly incorporates elements from the whole spectrum of  world music. The term genre bending is often overused but could have been invented for Gigspanner.

The warm up piece, Urban’s Reel, sets off at a kilter that  marks it as a frantic distant cousin  of Kitty Jay and while something like the live recording of  The Blackbird later on could be classed a foot tapper, nothing matches the opening volley.  By contrast, Lament For The Wife Of Urban Law is a stark and sparse piece; a ‘hold your breath number’ as you wait in expectancy and in anticipation of what’s going to come next. A classic case of less is more and the experience of knowing when not to play, building tension and suspense, together with a sense of some element of improvisation. Walking on the edge, not knowing whether it’s going to fly or fall, but exciting stuff.

Green Gravel may be familiar to anyone who follows Fay Hield, a song appearing on her most recent Old Adam set. Gigspanner turn it into a percussive and hypnotic sing song tempo with some Knopfler-esque licks. It’s a musical theme that plays a strong role throughout the album, see-sawing through  the old chestnut Bold Riley before a dramatic Knight interval finds its way back into the song. Not for the first time, we find a hard done by and deserted  husband at the centre of Peggy And The Soldier which evolves in that familiar tick tocking cadence.

Two tracks recorded live,  both bright and full of life , precede eight minutes of Rocking The Cradle that close the record and offer a cautionary tale as the Knight fiddle slowly emerges to weave a quivering path through the easy paced rhythm.

It seems apt to round  off by  bringing Gigspanner into context with a testimonial from Martin Carthy in his  recent English Folk Expo interview; one that cited  Knight as one of his major influences, which is more than  good enough reason to sit up and take notice if you haven’t already. Maybe take a pause to wonder where you’ve been for the last forty years, while those who’ve been on that rich folk rock journey can settle down,  comfortable in the knowledge of what to expect from Gigspanner.

Get a taste for Gigspanner by listening to a classic  Death And The Lady here: