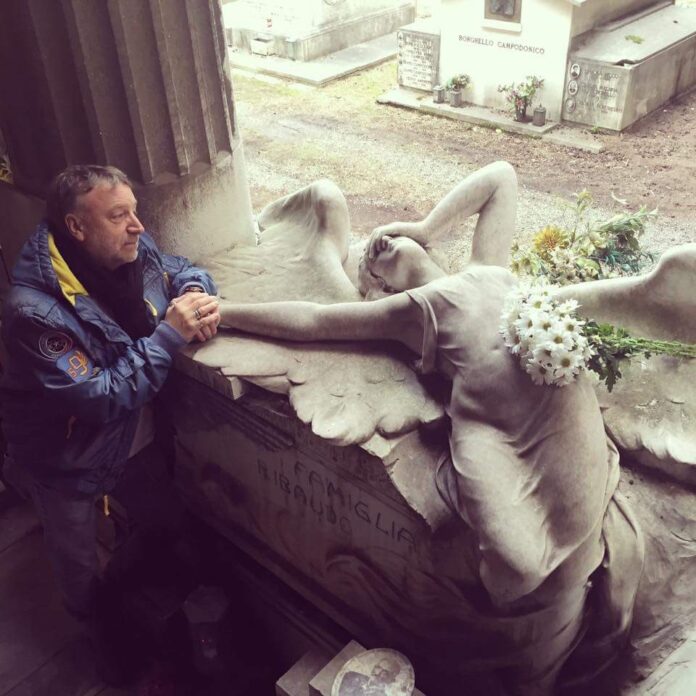 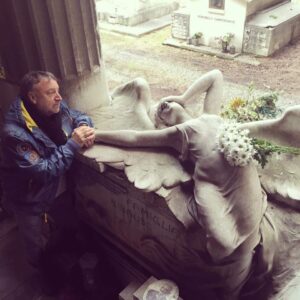 The iconic second Joy Division album cover, which was designed by Peter Saville using images of the Genoa based tombs taken by Bernard Pierre Wolff in 1978. The statue is part of The Appiani family tomb which was sculpted by Demetrio Paernio around 1910, and the Ribaudo family tomb, showing a grieving angel, was sculpted by Onorato Toso around the same time and has become one of the great album artworks.

There is something quite touching and iconic about Peter Hook visting the Monumental Cemetery of Staglieno in Geneo whilst on tour for a photo with the stunning statue.

After consulting the Louder Than War article on where the statue was in the graveyard Hook visited the Appiani family tomb, which was used for the cover of 1980 album Closer, and the Ribaudo family tomb, which was shown on an alternate cover (and popular t-shirt design) of “Love Will Tear Us Apart’s” 12-inch single.

“Very pleased to have been able to visit such a significant place in Joy Division history as part of our trip to Genoa today,” Hook wrote on Facebook for the caption under the Ribaudo tomb. “Looking forward to the sold out show this evening.” Under the photo of him next to the Appiani tomb, Hook wrote: “It was amazing to be able to visit the Staglieno cemetery today here in Genoa — this is the Appiani family tomb which was used for the cover of the Closer album… Feeling very honoured to be here & also very humbled, Ian would have loved to see this. See you later on at the gig. Love Hooky.”

All photos via Peter Hook & The Light’s Facebook pagr