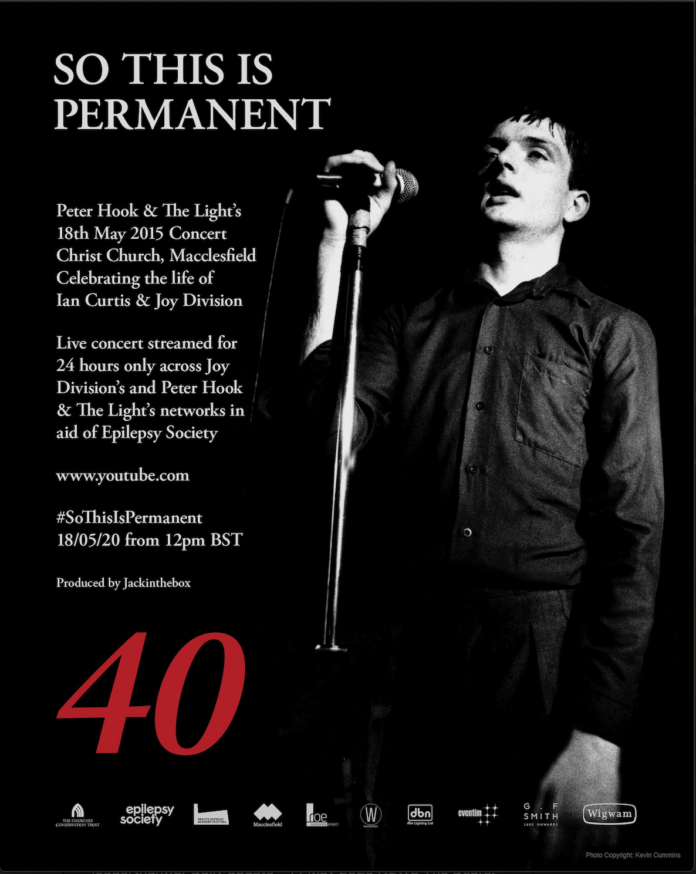 Some five years since the concert, ten years since The Light began and forty since Joy Division, Peter Hook & The Light are to air the three hour concert movie “So This Is Permanent” for the first ever time on Monday 18th May 2020, remaining online for precisely 24 hours from 12pm BST.

Featuring The Light’s evening long run through the Joy Division catalogue as performed on the night, this video record of that distinctive event also features our great friends Rowetta and Howard Marks, who introduces the broadcast as he did the original show in 2015.

The video will be premiered 12 noon Monday across Joy Division’s and The Light’s Youtube and Facebook channels and remain in place until the following day, a decision taken to allow fans from all over the globe, some of whom travelled to the original concert, to enjoy and share in the event.

The broadcast is entirely free to watch but we are asking that people if they are able, please make a donation to Epilepsy Society here – httpssss://bit.ly/SoThisIsPermanentESDONATE

A DVD of the broadcast is also to be released in mid June by Live Here Now who have done numerous live albums with The Light including the original Macclesfield recording. Again proceeds from this release go to Epilepsy Society. Details here – httpssss://bit.ly/SoThisIsPermanentLHNPreOrder

The 2015 concert came about following Peter Hook & The Lights first appearance at Christ Church in Macclesfield for Barnaby Festival in June 2013 which was also the first time a band member had played Joy Division’s music live in the town.

When Hooky came to mark what was then the 35th anniversary, he bellowed at one of his close associates in a Henry II style, “Deliver me that church” and returned to Christ Church in May 2015 to deliver a stunning concert where reactions from both press and the small gathered audience were phenomenal.

With Peter Hook & The Light having to put back their “Joy Division 40: A Celebration” concerts which were over this very weekend, when it was suggested to Hooky that the provided the opportunity to put together the Macclesfield footage which had lay dormant for some five years, he was delighted to be able to celebrate the anniversaries and share this with you.

Since the mid-April announcement, Hooky and The Light’s long-term collaborators Manchester based Surdevan Creative have put together the entire three hour concert film which was shot using an early version of their jackinabox system.

We hope you are able to tune in on Monday to share in the celebration of not only a classic concert but also one of the finest ever bands and lead singers.

So This Is Permanent – Broadcast Links

On So This Is Permanent

“The idea of coming back to Macclesfield, Ian’s home town and to the church Ian attended as a child as well as in his youth was wonderful. I wanted to do something different, something unique. I love playing our songs and what better opportunity could there be than to play every song Joy Division song ever wrote and recorded. They thought I was mad. I thought I was mad but we pulled it off. We played every song in one go. It was so emotional. I was so proud. I did it for Ian.” Peter Hook, May 2020

“Singing Ian Curtis’ lyrics & melodies is always so special and Macclesfield is one of my favourite ever performances. It was beautiful and emotive. I am so happy it was presented by our friend, the late, great Howard Marks who left me such a wonderful review afterwards. His words will stay with me forever, and I too was so sad to see him leave the stage.” Rowetta, May 2020

The review to which Rowetta refers is Howard’s own from Viva Magazine in May 2015.

“But then comes Rowetta. There is no song she can’t improve, even to the deaf. (Looking like both Venus and Tina Turner obviously helps). Her vocal range is phenomenal and the Joy Division energy tenaciously brings it all out. She injected excitement, love, modesty, and care. I was sad to see her leave the stage” Howard Marks

So This Is Permanent – Media Reaction

“This shouldn’t work, but Hook has dusted off the legendary canon with the care of a museum curator. Delivered in chronological order, the ?44? songs – almost three-and-a-half hours of music – trace Joy Division’s hurtling trajectory from a ramshackle but spirited punk band into something powerful and astonishing.” **** Dave Simpson, The Guardian

“It’s touching and powerful and the music’s raw power and incurable romantic dynamics are explored in a set that runs in a rough chronological order that makes you realise that there was not one duff moment or wasted note in the entire cannon. They really were one of those perfect bands and this masterful take on the catalogue is far away from nostalgia for an age yet to come but more like a celebration by one of its key architect“. John Robb, Louder Than War

Peter Hook would like to take the opportunity to thank directly all at Warners and Surdervan Creative for their help, hard work and assistance in putting together this project.