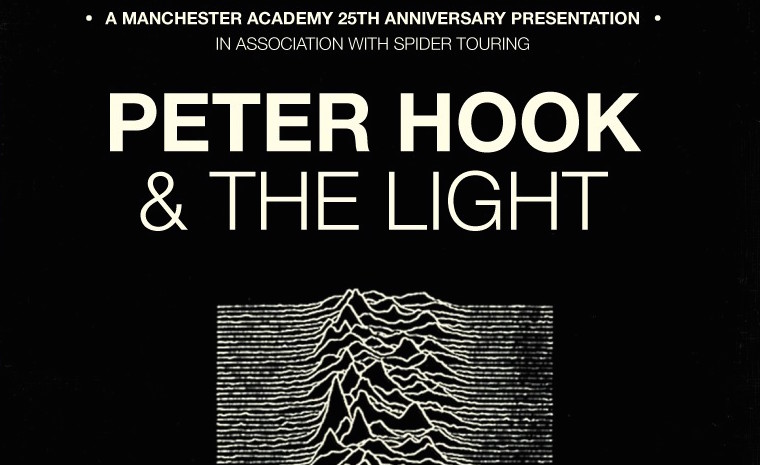 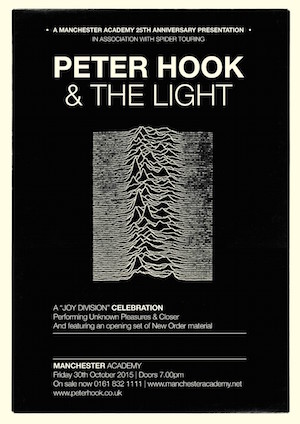 With Peter Hook & The Light’s recent, hugely successful, Hebden Bridge Trades Club residency and subsequent live release recordings fresh in our memories, we bring news that, in a special concert as part of the 25th Birthday celebrations for Manchester Academy, Peter Hook & The Light are to perform Joy Division’s “Unknown Pleasures” and “Closer” in full, and all material from the band 1978 to 1980, at the venue’s Academy One on Friday 30th October 2015.

The Light have only rarely performed the Joy Division albums in full since moving onto the New Order catalogue and this concert marks the first time The Light will have played them in their hometown since the Lowry Salford shows in October 2011.

Hooky And The Light perform on the final weekend of October with three other commemorative gigs taking place in October and November, Buzzcocks and guests Sat 10th Oct, Bruce Foxton (The Jam) Sat 31st Oct and The Wedding Present Sat 14th Nov.

Playing the albums sequentially and in track order, both Martin Hannett produced LPs are considered seminal, much loved classics and their influence remains pervasive today, both with fans and for the many bands, influenced by and who have taken on the template of Joy Division’s sound in the modern era.

“Unknown Pleasures” is considered one of the most stunning debut albums ever released while on “Closer” Hannett’s incandescent production permeates the record alongside a band that had grown much in confidence approaching their second album.

Both albums have come to yield many landmark tracks, “Unknown Pleasures” with “Disorder” “Insight”, “New Dawn Fades”, and “She’s Lost Control” while “Closer”, considered “a start to finish masterpiece” by Pitchfork Media counts “Atrocity Exhibition”, “Heart And Soul” and “Twenty Four Hours” amongst its many highlights.

With each album in full during the concert, The Light also turn to Hooky’s early repertoire to perform many other Warsaw and Joy Division tracks, some of which have never been played live previously apart from by The Light.

As has also become custom, the band will be opening for themselves with a specially selected set of New Order material.

Tickets are £23 Adv+BF and can be purchased here. You are strongly advised not to sleep on buying them!

Direct order links for the resulting recorded output (which we reviewed here) are as follows: