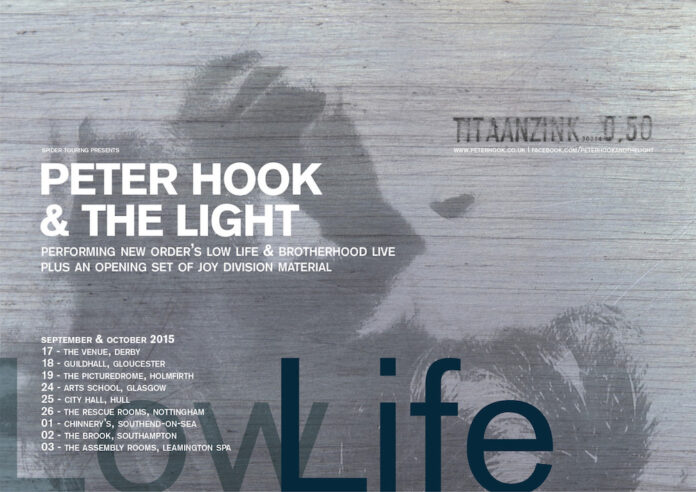 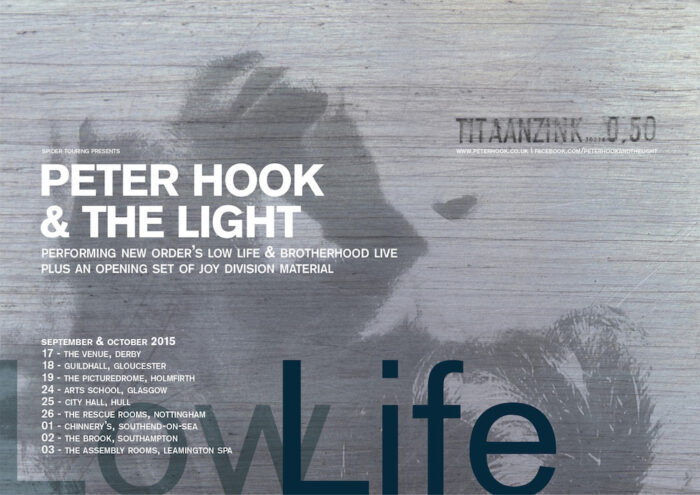 “This is New Order reinvigorated, reenergized; Hooky has arguably reclaimed the songs and is delivering them with heart and soul.” – Louder Than War, 28 October, 2013.

All Shows will feature Low-Life and Brotherhood as well as all material 1983 – 1987, including From Confusion To True Faith. There will also be an opening set of Joy Division material.

“In their first full UK tour performing New Order’s third and fourth albums, “Low Life” and “Brotherhood”, Peter Hook & The Light take to the road for a string of dates in late September and early October 2015, returning to many venues where the band’s previous shows have sold out and been very well received.

“The concerts will include the singles and B-sides from New Order’s most prolific period. From August 1983 up to 1987, taking the audience from “Confusion” to “True Faith”, with both “Low Life” and “Brotherhood” performed in full alongside all the other tracks from that fans consider New Order’s greatest period including “Thieves Like Us” “Bizarre Love Triangle”, “The Perfect Kiss” and many more.

“Both the singles and the albums for this period stand out as some of the finest work ever produced by the band and marking the high period of New Order artistically. The critical plaudits heaped upon “Power, Corruption & Lies” were followed by similar notices for “Low-Life” and “Brotherhood”, which are considered as a trio as the band’s greatest albums.

“Releasing “Low Life” in 1985 alongside epic single “The Perfect Kiss”, whose 9 minute 12 inch mix is considered one of the best of the decade, “Low Life” has made many regard it as New Order’s most complete single album. Aside from the singles, the album contains many great records that have entered the canon, including “This Time Of Night”, “Sunrise”, “Elegia”, “Sooner Than You Think”, and the album’s closer “Face Up”, an energetic club track.

““Brotherhood” itself took a unique approach, splitting the rock side of the band to the first side of the album, with tracks “Paradise”, “As It Is When It Was” and “Way Of Life”, whereas the flip side was electronic, taking in the two singles and also “Every Second Counts”.

“The Light’s concerts run up to 1987 when New Order enjoyed their biggest international hit “True Faith”.

“As has become standard, Hooky and The Light will be supporting themselves at the concerts performing a selection of Joy Division material.

“Peter Hook & The Light’s “Lowlife” & “Brotherhood” shows chart New Order’s final stage of evolution from the post punk of Joy Division to defining themselves as electro pop pioneers at the cutting edge of the emerging club scene in the mid to late Eighties.”

If you missed our recent reviews from the Peter Hook and the Light’s Hebden Bridge shows, where they played Joy Division’s complete output, you can find them here (Night 1), here (Night 2) and here (Night 3).