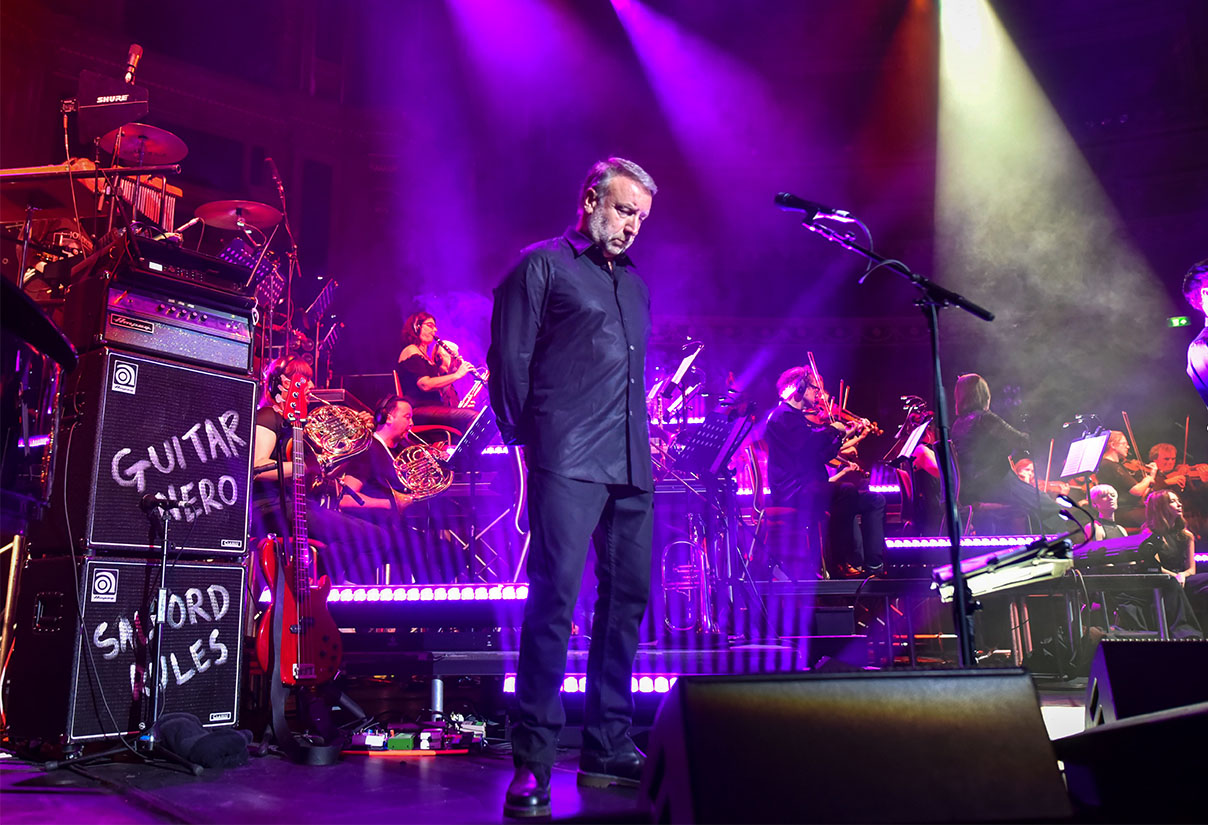 When I first heard Joy Division as a teenager at the end of the 1970’s I never would have imagined that I would one day be going to see the bands music being played by a full orchestra at The Royal Albert Hall. But in the intervening 40 years, the band’s music has not only kept its mystique but has grown in stature and has rightly long been considered extremely influential and ground-breaking work, the band’s life only cut short by Ian Curtis taking his own life in 1980 on the eve of the bands first tour of the USA. Simon Phillips (not the drummer) reviews the concert on behalf of Louder Than War.

This show is the first night of the Tour and is as daunting a launch night as there is as Peter Hook admits during his onstage introduction, where he explains that this was all the idea of tonight’s conductor Tim Crooks, who scored the music for the show as well as for the Hacienda Classical series. Peter also tells us that his current band The Light will be joined by The Manchester Camerata Orchestra and vocalists Bastien Marshall, Mica Millar and Nathalie Findlay.

As the atmosphere in The Royal Albert Hall gets more intense the orchestra take their seats the show begins with a very muted and far softer than expected version of Love Will Tear Us Apart with just some sparse Piano and gently kissed strings accompanying Bastien Marshall’s deep vocals, it almost felt like they were getting the big hit out of the way, but we needn’t have worried as the imperious central motif of Atmosphere was taken up by the string section and the orchestra fully come in as Mica Millar and Nathalie Findlay start to sing and they have special guest Jeremy Vine onstage to play the chimes while taking his signals not only from Tim Crooks but also from Hooky who shoots him a few looks as the song builds and it becomes clear just how well suited Joy Divisions material is to this sort of treatment.

Day Of The Lords was the first song Hooky took lead vocals on as strings seemed to swirl around the hall and make it sound rather magisterial. Nathalie took the lead on New Dawn Fades the first song to really be led by David Potts guitar lines that the orchestration worked around beautifully. Mica’s vocals on Means To An End made it sound like she was trying to escape from some horrible abuse and that she could never put her trust in anyone again as the brass punctuated the suffering and Hooky tried to make her trust him.

The main repeating riff of Isolation sounded totally epic in this setting and Hooky did everything he could to sound like Ian Curtis while singing it although it would have been difficult to feel that isolated in a hall full of people like this one. Bastien came back out to sing Disorder while also doing a good twitch dance as Hooky stood beside him not playing his bass as the strings and flute swirled around them. Heart And Soul was a richly enveloping plea from Mica that Hooky added backing vocals too as this sounded full of warmth and love that was certainly being returned from the audience.

The first half of the show concluded with them doing something I wasn’t expecting and playing a new song Higher Higher Higher Love that Hooky and David Potts have written inspired by a jam tape of Section 25 and Joy Division that they’ve turned into this new song by Monaco that was in two parts firstly mainly orchestral but with a sample of Ian Curtis that was full of swirling strings that then morphed into a very cool plea from Hooky and us all to feel Higher Higher Higher Love it worked really well and did feel like it totally fitted a cool and surprising close to the first set.

The second set opened with Rachel’s Song that sounded more like a prelude with some bleeps added also some very intense Xylophone. Then it seemed like they went up a level with a very fraught and intense version of Atrocity Exhibition with Bastien making the lyrics sound as scary as they ought to be and then towards the end Janet Fulton the percussionist started playing a Football rattle that somehow seemed like it was always meant to have been part of this song’s music.

Hooky’s vocals on Insight seemed more restrained after that but the music seemed to be coming more to life since the break and then as Dead Souls began the audience really seemed to lift and Mica kept repeating that haunting line of “they keep calling me” as everyone clapped and sang along for the first time making it feel more like a gig than a recital. This continued She’s Lost Control that Nathalie really took to another place as the strings and brass ramped up the intensity and pain making this one of the real highlights of the show.

The strings then made gentle sweeps through Beethoven’s Funeral March as Tony Wilsons disembodied voice could be heard introducing Joy Division on So It Goes as that magnificent bassline rumbles into life at the start of Shadowplay with the orchestration really giving it a very full sound as if it always should have sounded like this.

Hooky then explained how Malcolm Maclaren was a huge influence on them and how he loved Malcolm’s music by way of introducing there version of his mash-up of Love Will Keep Us Together with Love will Tear Us Apart in this case with Mica and Nathalie taking the Captain and Tennille’s parts and Bastien taking Ian Curtis’ part it was haunting and ethereal and very moving indeed as the strings built to a triumphant climax.

The Eternal almost felt like a comedown at this point as Natalie sounded rather redolent as Janet Fulton the Percussionist marked time with the big bass drum. Decades seemed like a perfect closer both in marking the decades that have passed since we all first heard it and the way that Bastien really brought the fraught emotions to life was a great end.

Of course they came back for an encore and I was hoping we’d hear Ian Curtis’ disembodied voice saying “you should hear our version of Louie Louie” before they played it, but no such luck and instead Hooky sang a monumental version of Digital that everyone sang along too and almost everyone in the seats stood up and danced too. Ceremony kept everyone on there feet dancing as the strings and brass sounded nice and ominous. They then closed with a wonderful sing along to Love Will Tear Us Apart this time with the full orchestra and everyone singing along and making sure we all left smiling and wanting to hear more of this not to be missed collaboration as Joy Division sounded like they should always have been orchestrated.

All words by Simon Phillips who can be found at his Facebook and he also writes for various online music magazines.