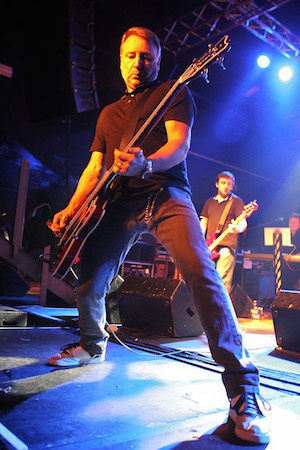 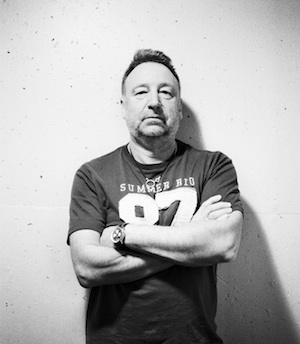 As Peter Hook (photo, right, © Julien-Lachaussée) And The Light are set to debut New Order’s third and fourth album’s “Low Life” and “BrotherHood”, as well as material from 83 to 87, next week, Mr Hook himself took time out of rehearsals to speak to Louder Than War.

I have got to say, after a couple of failed attempts (mainly my own fault) to get this interview off the ground I’m happy to say we finally got it on.

Louder Than War: Hi Mr Hook and thankyou for taking time to speak to Louder than War.

What has it been like revisiting “Low Life ” and “Brother Hood.”

Weirdly we are actually in the middle of rehearsals now and they are actually a lot different in feel to Power Corruption And Lies And Movement – really you only notice the difference when you start practicing them again, so it’s just a different style and because we are playing all the others it’s not like a clean start. Then it’s a clean sheet, you are trying to learn 30 more songs

And what tracks any favourites?

(laughs) Well i mean, the funny thing is that every time you come to do a track you’re like WoW! (laughs) this is great and you’re like you just want to play that one and then you get another one, but I know when we start playing them over and over again you’ll get favourites. It’s a really odd feeling, it does send shivers down your spine.

Like just today, I’ve just been doing “Touched By The Hand Of God”, the original version and before that we were doing confusion, weirdo and you’re like fucking hell they’re great tunes and it’s really weird. It’s like my wife said to me if you were still with New Order you still would be as frustrated you were and as unhappy as you were playing the same bloody thing over and over again.

Man, it’s really hard work considering we play all the Joy Division songs, which is about 45, and then you’ve got Movement and Power Corruption And Lies and the singles takes it up to 65, maybe 70 and I’m learning 30 more so I know 100 songs that were up and playing now, you look at a group like when New Order were together, before we split we played a maximum of 17 and a lot of the 17 were on backing tracks. Plus Barney had a rolling auto cue. 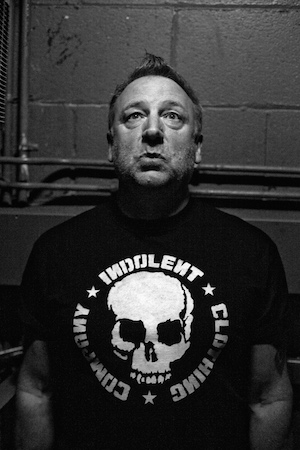 The sheer volume of material you do in your gigs is immense. For me The Joy Division set is a gig in itself. Why did you decide to implement this into your set?

The reason we did that was I couldn’t bare to lose all them songs again in a way that we had done before, ignoring them for 30 years and I was sat there thinking “God, I am going into New Order, am I gonna leave them for another 30 years?” I thought “no, there has to be some way.”

Unfotunately you are breaking the circle though which i do feel very guilty about where you’ve got no support band.

When I consider how important it was to Joy Division to get going you are conscious you know, you’re depriving new bands to get a chance.

Was it difficult for Joy Divsion to get supports when you started out?

Yeah, it was only the way to play before you were found and you really had to fight for them, I’ve put a bit in the book about how difficult it was, and you literally was begging and you weren’t the only band and that was the tough bit. So it makes me feel a little bit odd that we support ourselves, but you cannot win can you? Cause if I had supports I wouldn’t be able to do the Joy Division stuff and I’d be gutted again (laughs).

Do you think you get people just coming for the Joy Division Stuff?

One thing which is really weird when you do play, even though you’re playing New Order you notice
Joy Division t-shirts. I don’t know what that says?

Maybe I think there is still a demand to hear the Joy Divison Material?

I am not too sure it’s a demand, I think that Joy Divsion holds that place in people’s hearts. That is a big part of people’s thinking and I think maybe you’re right, yeah, people want you to play it and it’s nice.

We are doing a tour of South America and we thought we would be playing New Order and the promoter was like No, No, No we want you to play Joy Division again, because we’ve already been there twice with both albums. So it’s really nice and it makes me feel a lot happier because one of the big problems with New Odour and with New Order before we split, was the set list was really boring and conservative, they play the same things over and over again and it’s what used to drive me mad. Year after year and they have so many songs and I’d get in a argument saying can’t we play “This time of Night”, can’t we play “Sooner Than You Think” and all this lot like “Shell Shock”, “Confusion” but it was just like we’ll keep it like it is as it’s less work.

What’s it like being frontman, are you out of your comfort zone

(Laughs) No, I am used to it now, but when i started out with Joy Division I was absolutely terrified, it took me 6 months to even relax a little bit and you know, after a year I got to actually really enjoy it, it’s funny, as a musician you do count singing as different and I think you do have to transition from being a playing musician to being a singer.

I heard you have been working on a new track with Manchester band Big Unit?

Yeah, I am on the bass, I think they are a fantastic band and I wish they’d let me sign them up, the track also features Rowetta from the Happy mondays on Vocals and I’m really looking forward to it coming out.

In October you’re Djing at all 3 FAC51 Hacienda nights in Manchester, BlackBurn and London. Did your passion for djing come from spending most of your life in the club.

(Laughs) No it’s always been there, I didn’t really understand how difficult it was for DJ’s to build a night and pick the right tracks and build it up, when I first started playing I was pissed and off my head all the time and all I really wanted to do was annoy people, but after I kicked the drink and drugs in the head I thought a lot more about the crowd, what tracks I was gonna play. Sometimes I know it’s gonna be a disaster, the other week I was playing in Valencia and I was coming on after some resident and he was playing 138 bpm speed garage flamenco or something and I just thought “oh shit, my sets gonna go down well.”

Was it difficult kicking the drink and drugs?

Let’s just say it was a straight red card, what I’ve realised now is all these people at party’s who I thought were on drugs and off their heads are actually not and it was just me thinking people were all in the same boat as me.

Thankyou very much for taking time out and speaking to me, and good luck with the tour.

I would like to say a big thankyou to James Masters for his time and effort in making this interview possible.

Peter Hook and the Light have these UK shows lined up:

All details of Peter Hook and the Lights up and coming shows and news can be found on the links below, as well as all Fac51 up and coming events.

Peter Hook and the Light are on Facebook, as are Big Unit.