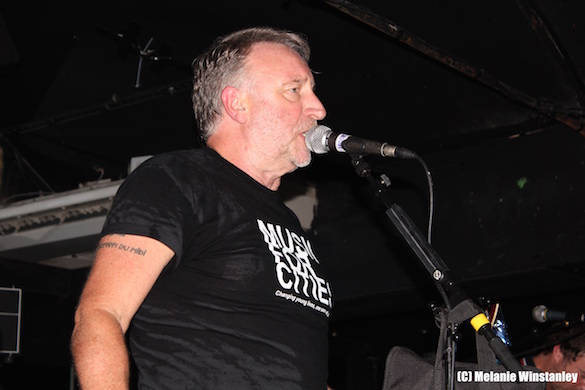 Peter Hook And The Light

Saturday night in York at replacement venue Tokyo Peter Hook and The Light performed what could be their last full set of New Order’s first two albums Movement and Power, Corruption & Lies. Louder Than War’s Nicolas Cope was in the audience, as was Melanie Winstanley who took all the pics on this page.

I was told to get in early due to the fact that he is also the support band under the name slaves of Venus. Much to the shock of everybody in the venue, the dance floor quickly filled up and left the bar abandoned as he kicked into an 8 track set of Joy Division, starting with the spine chilling Atmosphere which he dedicated to a recently departed friend. Hooky’s vocals were satisfyingly good, delivering them with enough emotion and passion to justify him singing these songs. Especially more so, on tracks Transmission and first set closer Atrocity Exhibition. 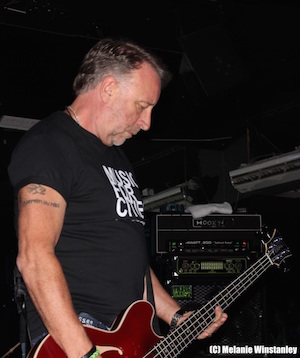 Was that the closest I will ever get to seeing Joy Division live? I probably think so! Hooky heads off stage for a break and the dance floor descends on the bar to be welcomed by warm Red Stripe. There was definitely a lack of communication in the beverage department as the beer ran out within 30 minutes. So, with the air-conditioning now turned off and my can of hot Jamaican lager in my hand I make my way back to my spot. The Light arrive back on stage for the first of the  main events, Movement.

Any thoughts I had of this being a tribute act by Hooky, or whatever I was thinking, is quickly dissolved and to be honest I don’t care. I am having a great time and so is everybody else in the place; it’s rocking. His signature rock stance and poses take all focus off the rest of the band and at times you just think it’s all about him, as he kicks into a beautiful version of Ceremony and the bass and guitar combine so well. At times he swapped his bass to baritone guitar and let his son Jack take over. The rest of the first set is faultless with, Truth, ICB and last album track Denial being a big crowd pleaser.

Power Corruption and Lies (FACT 75) sees New Order transitional album in the electronic era they had touched upon on certain tracks such as Movement, Cries and Whispers, Age of Consent and Silent Face, showcase what’s to become of New Order.

True Faith, Temptation, Blue Monday and Love Will Tear Us Apart unites the crowd for the last time as the show closes to an end. The crowd go away happy and for some, including myself, it’s the first time I’ve heard them live, with all tracks over 25 years old. Great tunes and to be fair Peter Hook and The Light put on a great night.