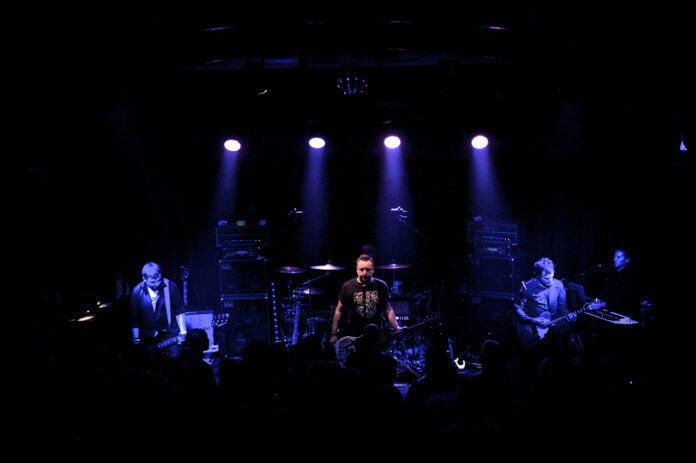 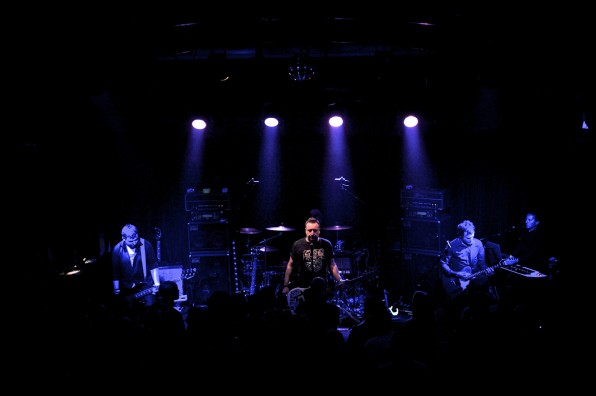 Photo of Peter Hook and The Light above © Craige Barker

Peter Hook and The Light – Live At Hebden Bridge

After a massive year Peter Hook & The Light performed SIX different Joy Division and New Order albums live over THREE separate nights at the intimate Hebden Bridge Trades Club in West Yorkshire in December, our reviews of which can be found here: Night’s one, two and three. These three nights have now been made available as CDs and / or downloads – our review, by Nicolas Cope and Kelvin Knight, can be found below.

Do you need another tale of what ‘Unknown Pleasures’ meant to a teenager in angst?

No? Well bollocks yer gonna get one … I was lost in a bedsit in Leeds in 1979 with a copy of this and a few Iggy records and punk 7″.

I saw Joy Division supporting Cabaret Voltaire in York and that experience will never leave me, Ian scared the living shit outta me to be honest, he was, to put it mildly, ‘intense’ but memorable.

To hear Hooky and his merry band of men play these songs again all these years later is a revelation, from the moment he walks you can hear there is warmth and deep mutual respect between the band and audience.

Hooky’s vocals? There can be no comparison and I would hope never will be, this is what it is and delivered with passion and respect AND why the hell should a whole new generation be deprived of hearing and seeing these songs performed by an integral part of Joy Division in Hooky?

Joy Division are a band who have inspired hundreds of bands who have made such great music with ‘Heart and Soul’ and the sound on this CD s as good as you’d want hearing these heart rendering songs again Bright,punchy and alive…

This sounds like a band who have rehearsed till it was spot on.

I have to say the musicians on this record are amazing…

Wilderness’ is beautiful, as haunting as it ever was and took my breath away … And ‘Atrocity’ and ‘Passover’ are played with the soul and intensity the songs deserve.

I have nothing but the utmost respect for how Hooky and the band took this project on – it can’t have been easy … we are talking two of THE most influential albums of all time.

I got chills and hairs standing up on the back of my neck listening to these wonderful recordings of a band paying respect to such incredibly moving testaments from THE most influential band since The Sex Pistols. 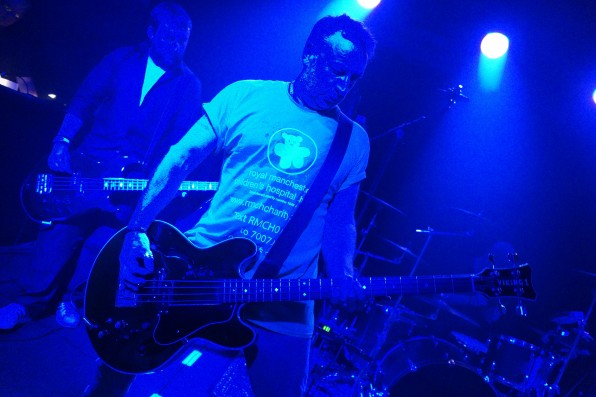 Photo above from night 1 © Craige Barker

At the start of Disc 2 Hooky claims to have been locked out, I was worried for a minute (?) but he is back on form within seconds “I’m Ready” !!” and “Disorder” follows…Where will it end?

It’s relentless and as intense as it was way back when.

I hope this reaches a whole new audience and awakens them to moments in time that shaped generations and I salute Hooky for bringing these amazing songs back.

“Insight” ….’I remember when we were young’ is wonderful, a band on form ~ hitting their straps with a rhythm section totally together and as tight as the proverbial…

There is that ‘small club talk amongst yourself’ feel before the start of “She’s lost control” and it hits home with the drums driving as ever they did and the guitar building momentum, it’s hard not to see images of Ian such is the power and feel of this performance.

“Shadowplay” has all the majesty it deserves, Hooky putting everything into it, bless his cottons, what he does he does with passion and soul, as such a project demands.

“Interzone” is uplifting and immense and goes into the smashing glass of “I remember Nothing” ….a song that means so much to me. This is the only time on this record I yearn for the original. Maybe it’s way to personal ? Some wounds can never be healed.

The record closes with Hooky on top form.. “You need somewhere cold with a bunch of ugly bastards and look what Santa got me” and straight into “Transmission” …

‘Dance, Dance, Dance to the Radio’ and I remember the first time I heard that refrain in Red Rhino Shop…

“Love will tear us apart again”. Delivered with power and grace…

And a Rock n Roll Ending… I’d expect nothing more.

This 2 disc collection of such ground breaking songs is a must buy.

It sounds great, it looks great and is a a testament to what’s gone before.

‘Movement’ and ‘Power, corruption and lies’.

Where the fook is Hebden Bridge ?

Well 8 miles west of Halifax and 14 miles North East of Rochdale and Cargo Studios but that’s a whole other story.

“In a lonely place” as Hooky remarks is quiet, but “Ceremony” lifts and “Procession” affirms Hooky on top form delivers over intertwining basses and the whole sound drives nicely. 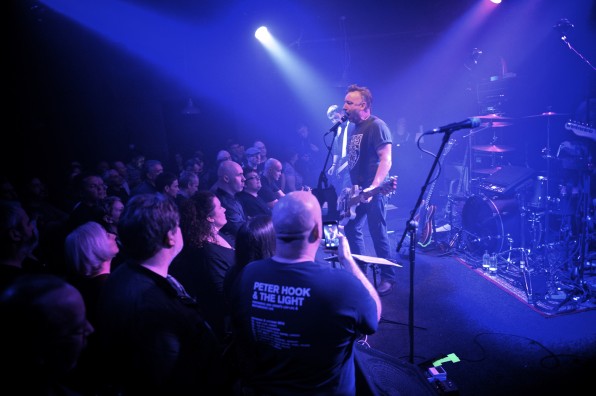 Photo above from night 2 © Craige Barker

What is really great about these recordings is they are live recordings of songs rarely played before ‘And that’s how yer play dreams never end’ ..New Order tended to play the hits full stop, here Hooky delivers the whole package.

Initially dismissed by the band (Peter saying later the only good thing that came out of the sessions was Martin Hannett showing them how to work a mixing desk) ‘Movement’ stands the test of time. In the wake of the tragic death of Ian Curtis it must have been an incredibly difficult album to make.

The sound quality on these CDs is excellent, product of a lot of work in the famous Abbey Road Studios. They sound great, alive and atmospheric, drawing you in.

‘The Him’ drives wonderfully..”I’m so tired” well mate you will do these 3 set gigs.

And into the rolling Toms of ‘Denial’ with a punching snare roll bringing Disc 1 to a glorious end.

“Power, corruption and lies” marked a massive shift in New Orders sound and method. The huge success of “blue Monday” changed things forever. But famously initially it was not on the album (resulting in stickers on the album saying ‘Does not include Blue Monday’!

Disc 2 kicks off with ‘Mesh’ and things are pretty chilled until the urgent ‘Age of consent’ charges in, insistent and driven by basses to die for. and due deference is made to the album, always tight and spot on…

‘5 8 6’ is fantastic the keyboards complimenting the driving force of drums, basses and claps.

It’s fascinating to me how the technology that came in on this album builds into the set here, hinting at what’s to come. A band who went from the dark, bleak ground of joy Divisions ‘Closer’ to dance floor filling techno driven pop. ‘Ecstasy’ hints at ‘Thieves like us’ but ‘Leave me alone’ is back to the rhythm punching (dare I say it ?) Rock n Roll and goes down to cheers of support.

And then that familiar refrain, that famous bass line and the Oberheim DMX drum machine kick drum … the keyboards swirling in and … Everything goes green!

‘Someone got a ticket for the wrong night  … that’ll teach you to read the fookin poster.’!

Up, down, turn around

I’ll find my soul as I go home

…and then, finally the full ‘Blue Monday’ bringing to an end a wonderful set of nostalgia and inspiration. 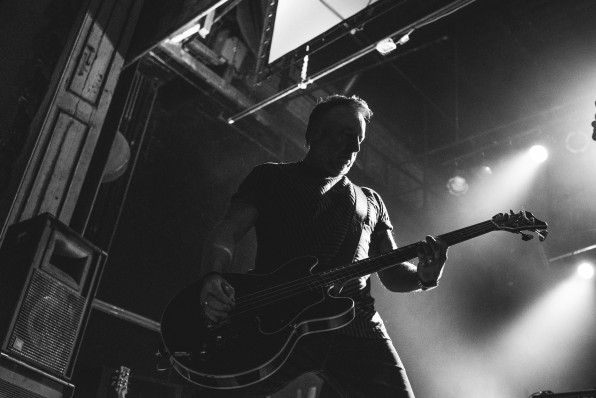 If you love New Order you’ll love this, played with purpose and drive and not afraid to bring the album tracks, not just the singles, to people’s ears.

‘I’m getting a feeling of déjà vu’ says Hooky … Took me back to The Chameleons 3rd night at The Witchwood 2000 ‘Welcome to Groundhog Day number 3’.

‘Thieves like us’ swamped by swirling keyboards interjected by driving basses and drums. Co-written by Arthur Baker the song has always given a sideways nod to ‘Don’t you want me’ (Human League). As on the previous two nights at Hebden the band are tight, sure-footed and deliver with soul and passion.

It’s a long time since I’ve heard a melodica (Gang of 4?) … but ‘Love Vigilantes’ delivers one and a wonderful refrain. One of the great things about this album and the other Hebden Bridge Volumes is they remind you of great tracks you’d almost forgotten about.

And so to the pop wonderfulness and dance must ‘The Perfect Kiss’ again swirling keyboards and basses pick you up and deliver. 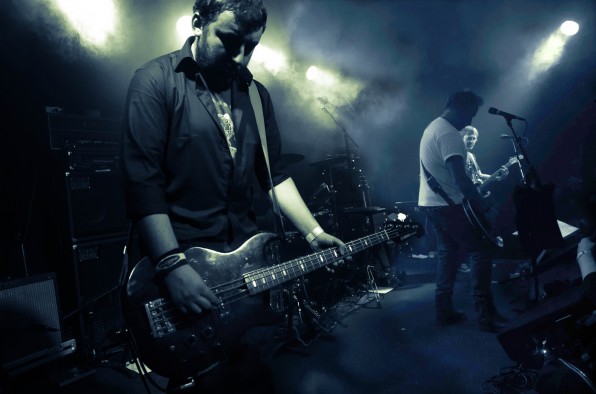 Every track on this CD brings back a memory, and this is the 12″ version! I dare you not to get up and dance as it builds layer on layer, basses jagging around and synths sweeping. This is magnificent.

The set sweeps through the album ‘Low-Life’ flawlessly tight and with passionate delivery. ‘Face up’ is excellently done, rolling toms and those basses ! Such power and such respect shown to such great songs…

“No rest for the wicked” says Hooky and there’s a bit of on-stage banter before ‘Paradise’ kicks in and the band move through ‘Wierdo’ through to ‘Way of life’ with all the passion and drive you’d expect.

As I say the sound is excellent, rarely found on live albums.

‘Bizarre love Triangle’ is excellent, the one single from the album has all the percussion and tech interjections you’d want and is a really cool version of a great song.

Hooky and the band move effortlessly through ‘Brotherhood’ …including a wonderful hazy ‘All day long’ which draws you in and conjures up so many long lost daze.

The slow teasing build up to ‘Every little Counts’ which has Lou Reed/Velvet Underground all over it (but never as clearly as here) is brilliantly handled. The slight pause before the keyboards sweep in is wonderful, the mix right around the band is perfect.

And the audience chant ‘Hooky Hooky !’ to which he declares he has a psycho~therapist (Lord help her!) before launching into ‘State of the Nation’.

And then comes the follow up to the massive hit ‘Blue Monday’…. ‘Confusion’ was never my favourite New order song but here live it sounds better than I remember it.

And so to the wonderful ‘True Faith’ and after Hooky thanks the faithful band they deliver a blinding version of a great song.

So how do you end 3 nights of Joy Division / New Order albums played live and with such power and beauty…?

Would a spirited ‘Love Will Tear us Apart’ do you?

And so it should.

Respect to Hooky and the band for playing 72 (?) different songs over 3 nights in the middle of Yorkshire.

You should buy these albums and love them for what they are…. a testament to our youth.

These are songs that changed lives.