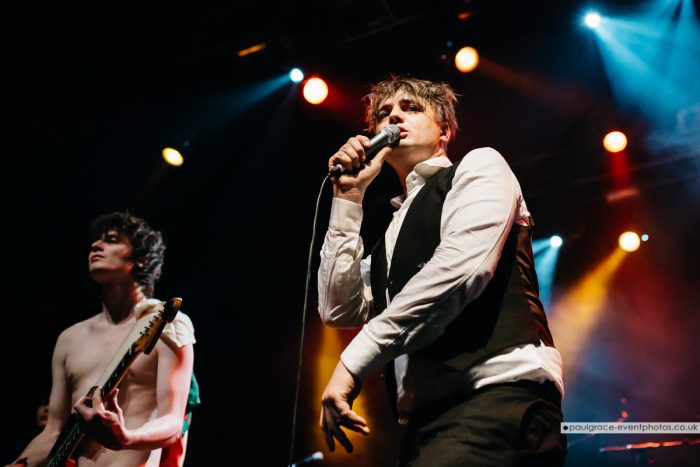 December 7th saw the ever-intriguing Pete Doherty take to the stage at Manchester’s Albert Hall for the second time this year to perform tracks from his new solo album ‘Hamburg Demonstrations’. Backed by his band ‘The Puta Madres’, Louder Than War’s Abi Small went along to bear witness to proceedings, accompanied with photos by Paul Grace from Pete’s show at Kentish Town.

If there was ever a venue that was purpose-built for Pete Doherty, it’s Manchester’s Albert Hall. The high ceilings, stained glass windows and general ‘Gothicness’ of the former cathedral make for a profoundly atmospheric yet intimate venue, and it is only appropriate that a building so fundamentally steeped in history, feels like a place in which history could still be made. Now performing under the slightly more astute name of ‘Peter Doherty’, any assumptions that this additional letter may have heralded a new era of sobriety for the songwriter were soon stripped off, as a recognisably disheveled figure staggered onto the stage in true Doherty fashion.

Despite appearing over 45 minutes late, the crowd seemed unperturbed by Peter’s lack of punctuality as the entire hall raised a pint in unison and greeted the singer with elated cheers. At this point, as he stumbles across the stage and fumbles to pick up his guitar with all the mannerisms of a puppet on a string, it’s difficult to tell whether the man is absolutely fucking spangled, or if this is just his permanent state of being; either way, any potential doubts were soon quashed as a solitary Peter Doherty kicked off the evening with a mesmerising acoustic rendition of Siegfried Sassoon’s war poem, ‘Suicide in the Trenches’. Next to come was the ever-anthemic ‘Albion’, which began acoustically and escalated into a full ensemble as Doherty’s touring band ‘The Puta Madres’ (English translation: The Mother Fuckers) calmly walked onstage and joined him mid-performance. Complete with the usual set up of drums, bass and guitar (played with astonishing energy by ‘Trampolene’ frontman Jack Jones who also appeared as the support act earlier in the evening), as well as a violin, harmonica, glockenspiel and tambourine, the Puta Madres looked more like a Victorian carnival act than a rock band, with Peter Doherty as the orchestrator of this bizarre but wonderful collective. 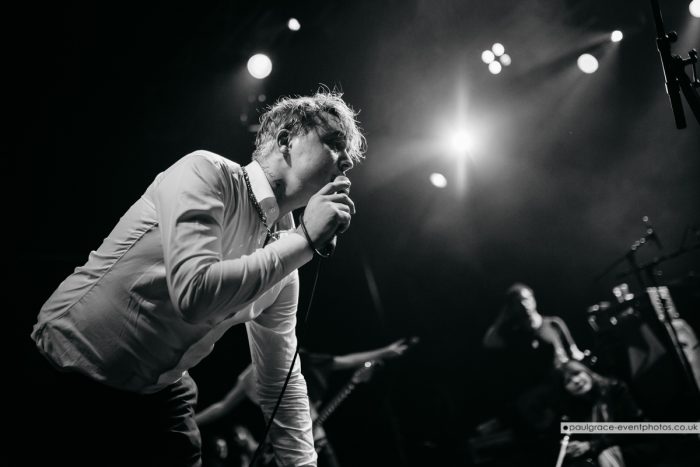 With a set that consisted mostly of tracks from Pete’s new album ‘Hamburg Demonstrations’, particular highlights included ‘Kolly Kibber’ with its typically tongue-twisting Doherty-esque lyrics, and a heartfelt rendition of ‘I don’t love anyone, but you’re not just anyone’, which were both well received by an extraordinarily responsive audience. The tracks that really sent the audience into a frenzy however, were fan-favourites ‘Last of the English Roses’ from Pete’s first solo album, and Libertine’s track ‘You’re my Waterloo’, which both provoked earth-shaking sing-a-longs from the crowd. Despite reasonably smooth beginnings however, for the most-part the gig felt like it was balancing on a knife-edge, and there were several points where it looked like the wheels were close to falling off the whole operation.

As the gig reached its final moments, the gaps between songs became longer, and the amount of onstage dialogue made it clear that nobody had a clue what was going on, leaving a bewildered audience to look on as the band muddled through their final tracks. Despite the bewilderment however, the mass only became increasingly more boisterous, launching their pints across the venue as Pete began a seemingly impromptu mash-up of Lou Reed’s ‘Ride into the Sun’ and Oasis classic ‘Don’t Look Back in Anger’. Finishing up with a window-shattering version of The Libertine’s ‘Up the Bracket’, the whole room descended into tumultuous chaos, and were definitely not for going home. Despite the pleas of the venue staff, the band remained firmly onstage well past the venue’s curfew of 11pm, prompting security to pull the plug as Doherty began fan-favourite ‘Fuck Forever’. The undeterred crowd however, responded by continuing to belt out the track at twice the volume, and it really was a sight to witness. Clearly energised by the devotion of his followers, though he didn’t exactly trash his gear, a few mildly anarchic gestures from Peter throughout the set only added to the fervour of the crowd; after several mic drops, a guitar throw, accidentally smashing himself in the dish with the mic stand more than once, tipping the speakers over and launching whatever he could get his hands on into the audience, the minor acts of vandalism culminated in a series of stage dives from Doherty and the members of the Puta Madres as the band were spurred on by the chants of an unrelenting crowd.

If you turned up to this gig expecting to hear a set of heavily rehearsed songs churned out like clockwork, then you were in the wrong place, but it is the unrehearsed nature of Peter Doherty and The Puta Madres that gives them all their charm. Their unabashed rawness is refreshing in an age where so much live music is overproduced to the point where it is no longer live music at all, and though there may not be method in their madness, there’s a shitload of authenticity. It would be reductive to refer to Peter Doherty as a rockstar- he is an artist, a poet, a showman, the last of a dying breed and the fact remains that he is one of the best songwriters that we have seen so far in the 21st Century.

You can find Peter Doherty online here: www.albionrooms.com. He is also on Facebook and tweets as @petedoherty.

All photographs by Paul Grace. For more of Paul’s writing and photos go to his archive. Paul is on Facebook, tweets as @pgracephoto and his website is www.paulgrace-eventphotos.co.uk