Home Blogs Pete Shelley – what would be the best commemoration – a statue... 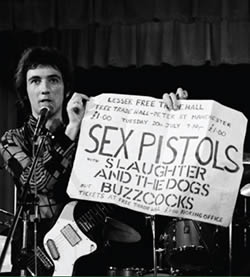 Since the recent death of the wonderful and inspirational Buzzcock, Pete Shelley, there have been many discussions over what would be the best way to commemorate his life.

Many people have called for some kind of statue and whilst we understand the permanence of this we believe that a better way to capture the proactive spirit of the late Buzzcock would be some kind of Pete Shelley Centre in his hometown of Leigh – maybe something like the Anthony Burgess space in Manchester but in Leigh – in a town that needs putting on the map of pop culture and a space to inspire the next generation of creativity. One of the great things about pop culture is that it is theoretically for everyone everywhere and Pete should be an inspiration to a town that gets forgotten about in pop culture terms.

This would not only be a place where his music is played and his iconic artefacts displayed, but also  a cafe, a rehearsal space, an art space, a library, a gallery and a meeting space where people connect and create ideas, where people come to talk and inspire, where things happen just like those two iconic Sex Pistols gigs Pete helped to put ion in Manchester in 1976. It doesn’t have to be big but somewhere that celebrates his past but also inspires the future. If we want to be more ambitious maybe out front something like the comedy carpet in Blackpool with but with Pete’s lyrics, those great sets of words – some of the greatest in pop culture.
If not in Leigh it would be good to have this in  Manchester – the city where he kick-started a musical revolution with those Pistols gigs and the first independent record – the Spiral Scratch EP – maybe Manchester is overloaded with pop culture stuff but perhaps a corner of the Manchester museum could be given over to the same kind of project mentioned above – a place to celebrate the past but to inspire the future.
Paul Lally is running a campaign to do something – message him here
Thoughts below please!