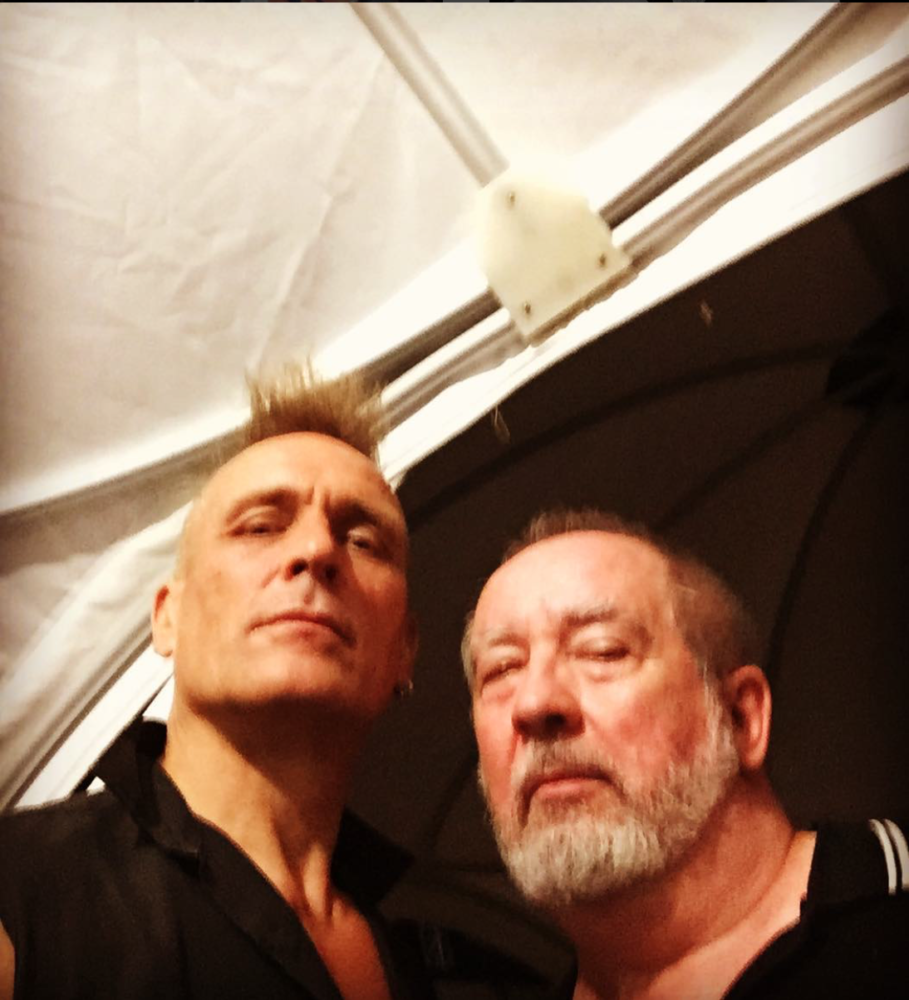 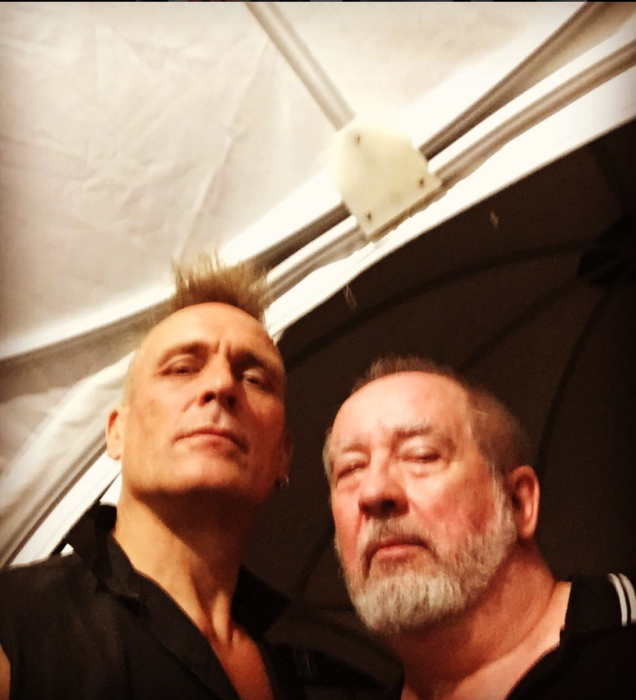 In our world and on every level this is a huge loss.

Tonight we feel emotional. Fragile. Pete was a beautiful soul and his music touched us physically, emotionally and artfully.

Love is the universal language of pop but so few people have written about its confusion of signals and powerful emotions and its fluidity, frailty and imperfection as eloquently and brilliantly and succinctly as Pete Shelley.

Freeze-framed forever coyly looking at the camera under his tousled mop of hair and his homemade Mondrian striped shirt delivering a stunning melody and a beautiful string of words with a rush of sound that was pure adrenaline, Pete Shelley was the poet laureate of punk with those genius lovelorn lyrics, effortlessly brilliant melodies, artful smarts and sexually fluid love songs as challenging and inspiring as any snarling manifesto.

It made him one of the key architects of punk rock, Manchester music and, by extension, independent music and a gigantic influence on anyone who loved pop culture and the sheer scope of emotional power than you can make with a guitar.

And yet there was even more than this. Buzzcocks were also pop art, an utter inspiration to anyone in the north of England. They were clever, snarky, hip, cool and could be funny as fuck – the two note guitar solo on their 1977 song, ‘Boredom’ – embodied the pose of boredom with its deadpan smirk and was hilarious and perfect – a response to the guitar bores and a perfect simulation of the fast forward rush of the tail end of 1976.

They also changed the culture by bringing the Sex Pistols to Manchester and releasing their own single on their own label – they were game changers – empowering us and inventing indie culture.

Named after a Time Out magazine headline about the Rock Follies, Buzzcocks had an endless run of hit singles in the late seventies that rushed with melody and ideas and three brilliant albums – they never released a bad song. Every B side was perfect, every A side was timeless.

It was art pop perfection.

Every single thing they wrote was utterly original – like Spector’s mini-symphonies for kids but without an orchestra – they could reinvent guitar, bass and drums over and over again in every song – they were so clever and so cool and they were formed just down the road from us and they empowered us and a thousand other aching bedroom bands to have a go.

Pete was also one of the nicest people you would meet on the worldwide punk rock circuit. A joy to hang out with. Funny and full of stories delivered with a razor-sharp memory and a cheeky smile that could remember things in micro detail and delivering great tales from the cutting edge of popular culture with that lovely northern accent and twinkling eyes. A beautiful soul.

Pete Shelley has died of a heart attack at 63 and like many of you, I’m really gutted. He was part of the soundtrack of our lives and sang songs about the sort of stuff that most of us could never say – isn’t that the power of pop at its very, very best.

Pete was not only one the greatest songwriters this country has ever produced but also a genuinely nice man. I’ve interviewed him many times, done a great chaotic in conversation with him and Howard Devoto, been on TV with him and both my bands – Membranes and Goldblade have supported Buzzcocks at gigs across the world. He was a genuine golden-hearted host and a joy to be with. He was also one of the key architects of the culture that changed my life and probably everyone else’s who is reading this, as well. He may have been too modest to barge the Rottens and the Strummers out of the way but he was equally important in that he broadened what the culture could be about. He subverted rock n roll with that talent.

Pete’s coy sexually fluid love songs were full of the lust and confusion of human relationships –  the perfect heart of pop, that frailty and that humanity and that honesty and they came armed with those quicksilver melodies. Every song is a superb glistening run of notes sung in that brilliantly camp, verging on hysteria voice with its northern accent never diminished. It was as pure a punk rock voice as you could get before punk became a shouting match – this was the genuine soul of the movement – the non-macho, stunningly talented, switched on genius of Pete Shelley.

His beautiful brazen honesty and stunning gift for writing about the most powerful force in the world -love – made him a pop genius. The fact that he could marry this poetic brilliance to some of the greatest melodies in pop culture – quicksilver rushes of intangible melodic brilliance and then deliver them over that thrilling buzzsaw guitar sound and the two guitar interplay with his wonderful Buzzcocks partner Steve Diggle was the heart and soul of a culture.

Then there was the fact that Pete Shelley, along with Linder, and Richard Boon were a cultural force in pre-punk Manchester. The artfulness of the band and their inspirational approach saw them take punk from London and give it to Manchester and then, by extension, the rest of the world with those iconic self promoted 1976 Free Trade Hall gigs that saw the Sex Pistols play in town inspiring the now world famous Manchester scene into action. Then there was their January 1977 Spiral Scratch EP that marked them out as one of the key cultural forces from that tumultuous year.

One of a handful of genuinely switched on people in mid-seventies Manchester he and Howard Devoto and Richard Boon made the now legendary journey to London to see the Sex Pistols in early 1976 after reading the first live review of the band in a music paper whilst at college and brought punk out of London and to the rest of the world.

Those legendary gigs at the Free Trade Hall in 1976 kick-started the Manchester scene and the eventual rejuvenation of a whole city. Without Buzzcocks there would probably be no Factory Records, no Joy Division, no Smiths – the whole damn lot.

Their debut single – the 4 track Spiral Scratch EP is arguably the only genuine punk record – of course the whole raft of releases at that time are part of our DNA but that snarky, buzzsaw rush with its rudimentary sound and wonky melodic brilliance was the perfect snapshot of the raw creative rush of ideas of punk rock.

Howard’s lyrics and vocals are, of course, perfect and when he was the first person to retire from punk rock in early January 1977 it was so hip and cool and then when he went on to form Magazine and kick start post punk and release their first single the anthemic rush of Shot By Both Sides they were the coolest band in the world – and what was even cooler was that it was his buddy Pete Shelley who wrote the song. Damn. Genius.

After Howard left Buzzcocks and Pete started singing they became one of our greatest ever pop bands. There is no other word for it. Buzzcocks singles have to be one of the greatest runs of seven inch singles ever. Each is melodically pure but they were more than that. There was that art twist in them. They managed to take that buzzsaw sound and reinvent it with every song. It was incredibly sophisticated and clever and you could sing along with it – just look at that run of hits – it’s stunning – very few bands have had that depth of creativity and in such a rush – they were banging them out every couple of months. And they were all great.

Post Buzzcocks there was Homosapien – another brilliant song this time with Martin Rushent providing electronic backing for a single that was ahead of its time and blissfully brilliant. Eventually, the band reformed and celebrated their legacy with endless tours. They should have been as big as the Beatles but the mainstream were scared of punk rock in those days. The people that knew, celebrated Buzzcocks. They were big. They should have been the biggest. The songs live forever.

It was a key role that Pete never took the credit for. He was a modest man with a genuine heart of gold. The last time I saw him was backstage after a festival in Croatia that Membranes and Buzzcocks played. It was a warm evening and we were hanging out with Pete and Steve Diggle for a hilarious and joyful evening of giggling fun. The chalk and cheese pair were relaxed and hilarious finishing off each other’s one-liners like dear old friends.

Buzzcocks had just delivered a stunning set that they played for years – that set of end to end hits – the greatest jukebox show on earth. They toured non stop and you did sometimes wonder about how exhausted they must be as Pete and the band lived life to the full.

My final freeze frame of Pete is the older man. Laughing at the absurdity of life. Giggling under the Croatian skies. Another festival. Another night of that most special of jukeboxes. Another reminder of that eternal genius.

God bless you Pete and thanks for everything.