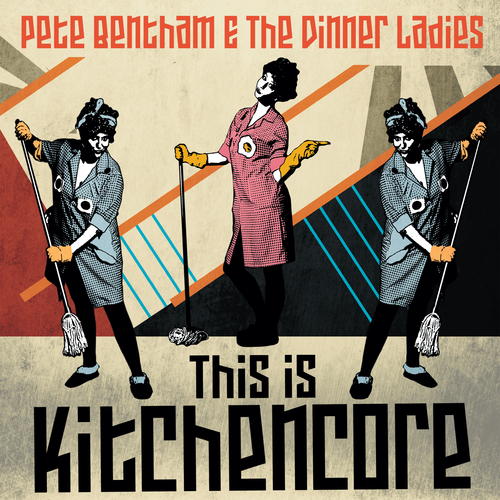 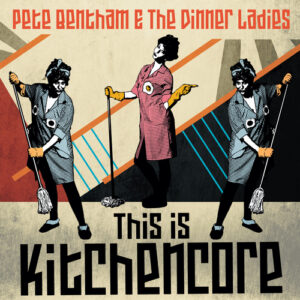 Released to celebrate a decade of self-declared ‘Kitchencore’ this 16-track album; a re-release of the 2016 CD edition, though the tracks have been re-jigged and the whole thing is presented in a gorgeous gatefold sleeve with additional liner notes and original artwork; the album gathers together a selection of tracks from the bands previous album and EP releases, tracks that have become gig favourites, radio hits and examples of the idiosyncratic weirdness as served up by Liverpool’s Pete Bentham & The Dinner Ladies.

Neatly presented in (near) chronological order, ‘Do The Don’t’, ‘Hip Potater’, ‘That London’, ‘Cats and Dogs’ and ‘Work’ are all culled from the 2010 ‘Hip Potater’ album, it’s a gloriously chaotic mix of sax heavy lo-fi garage punk, and on ‘Cats and Dogs’ a jazz tinged Roger Whittaker on acid type laconic romp… honestly! Despite the ensuing years, and countless band member shuffles these early tracks retain a freshness, a vital spark that remains present within the band still today.

‘Che Guevara Thing’, ‘Ugly’, ‘Nature’, and ‘Boy With Magazine’ are drawn from the 2009 album ‘The New Underground’, ‘Nature’ is a respectful nod to the animals around us driven by some angular guitar riffs, the same riffs are over ridden for ‘Che Guevara Thing’, and coupled with some Nick Knox derived beats and steady bass tones in this knock around belter.

‘Hey Yuri!’ was included on the 2013 ‘Spacepunx’ EP, a release dedicated to Russian cosmonaut Yuri Gagarin; marking the 50th anniversary of him being the first human to journey into outer space when he completed an orbit of the earth on 12th April 1961. Opening with a 30 second original radio recording celebrating Gagarin’s achievement, before initially giving way to a flourish of Mexican cantina which then morphs into a typical lo-fi garage punk romp enriched with some subtle brass and backing harmonies over which Pete questions the subsequent exploitation of Gagarin by his Communist paymasters; average fare for the Dinner Ladies!

‘Marcel Duchamp’, an ode to the French conceptual artist is a frantic garage roustabout that clearly had the attendant recording engineer pulling his hair out, this is hell for leather, turn everything up to the max rock ‘n’ roll, the barely captured distortion gleefully shredding your speakers.

’Dead’s Not Punk’ is one of the more instant tracks, driven by a nagging saxophone reminiscent of those old X-Ray Spex songs, whilst The Dinner Ladies question the perceived cool of drug abuse. ‘Queen Victoria’s Knob’ is a Liverpool tourist legend, and as such worth of a Dinner Ladies tribute; the actual Victoria Monument, a neo-Baroque piece no less is cited in Derby Square… you just need to position yourself correctly to understand the song title; another city landmark also gets a mention as Pete recounts ‘Walkin’ Down Bold Street’, sadly ‘Concert Square’ is the only track missing from the late 2016 ‘Psychedelic Village’ EP.

All together we get sixteen tracks of rigorous off kilter pop, and inventive lyrics, delivered with caustic humour – tracks that barge rudely through both genre and boundaries and are all the better for it.